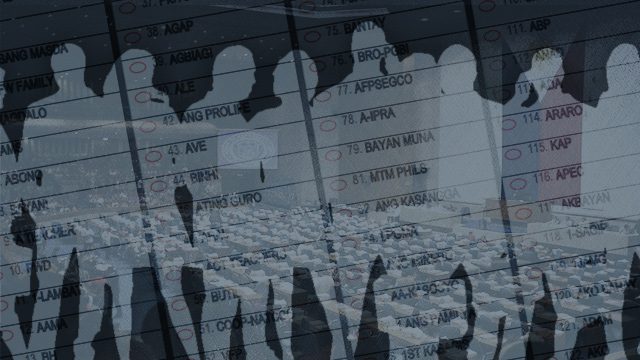 Facebook Twitter Copy URL
Copied
While there have been nominees from marginalized sectors, some individuals and groups have taken advantage of a 'loophole' to join the party list

MANILA, Philippines – On May 9, voters will choose a new set of leaders, including organizations that would get to earn seats in the House of Representatives through the party list.

In principle, party-list representation in the Lower House aims to include members of marginalized and underrepresented sectors in the legislative process to draft laws that will uplift their welfare.

But over the years, while there have been nominees and congressmen from these sectors, some individuals and groups – mostly from political dynasties – have taken advantage of a “loophole” which allows them to treat the party list as a “shortcut” to Congress.

In 2013, the Supreme Court ruled that parties and organizations “do not need to organize along sectoral lines and do not need to represent ‘any marginalized and underrepresented’ sector” to join the party list.

The crop of party-list nominees for the 2016 polls reflects this. It’s a mixed bag – reelectionists, political dynasts, former congressmen and government officials, and legitimate members of marginalized sectors.

It’s therefore important to know more about the nominees representing these party-list groups.

Among the outgoing party-list representatives, at least 7 are seeking to be replaced by their relatives:

At least 13 more nominees are relatives of current and past legislators, including the son of Senator Miriam Defensor-Santiago, Narciso Santiago III.

Names of some party-list groups – like Ako Bicol, Abyan Ilonggo, and Abante Mindanao (Amin) – are straightforward enough, as they represent a region or a group of people.

But if you go only by the name of at least 4 party-list groups, you wouldn’t know they have nominees from the same city, province or region. Incidentally, some of them are from political dynasties, too. Some are even incumbent elected officials.

Take the Kasangga sa Kaunlaran party or Ang Kasangga, for example. Its nominees hail from provinces in Western Visayas. The 1st nominee is Aklan Vice Governor Gabrielle Calizo-Quimpo. Following her is former transportation undersecretary Jose Perpetuo Lotilla, who is from Antique.

Another party-list group, Association for Development Dedicated to Agriculture and Fisheries (ADDA), has nominees from Ilocos Sur. First nominee Grace Kristine Singson-Meehan is the daughter of Ilocos Sur Representative Eric Singson. Second nominee Jemarose Gomintong is a lawyer based in the province, 3rd nominee Leonofre Gironella is the former mayor of Salcedo town, while 4th nominee Chester Elaydo is the outgoing mayor of San Esteban town.

The first two nominees of the Serbisyo sa Bayan Party (SBP) are outgoing councilors of Quezon City: Ricardo Belmonte Jr and Dorothy Delarmente, both of the city’s first district.

See the full list of party-list nominees and Rappler’s notes on each of the groups’ nominees below.

Meanwhile, some party lists represent various interest groups, such as:

The first two nominees of Tanggol Maralita (TAMA), Darlito dela Cruz and Queen Ashley Ablan, are officers of HPI Direct Sales and Trading Corporation, a firm previously flagged by SEC in May 2015 for the unauthorized solicitation of investments.

In March, the National Bureau of Investigation charged 15 HPI executives, including Dela Cruz and Ablan – for allegedly duping their clients of over P1 billion through an investment scam.

Meanwhile, at least two nominees of One Patriotic Coalition of Marginalized Nationals or 1Pacman, are connected with the “Pacman” himself, boxer, senatorial candidate, and Sarangani Representative Manny Pacquiao.

Two more nominees are top officials of ports industry company GlobalPort 900 Inc. The group claims on its website that 1Pacman is “for the poorest of the poor” and “a coalition of advocates for the marginalized and displaced in society.”

Its 2nd nominee Enrico “Eric” Pineda is Pacquiao’s business manager and the team manager of PBA team Mahindra Enforcer, which Pacquiao currently plays for. Its 3rd nominee Nicolas “Nick” Enciso VIII is a former deputy director general of the Technical Education and Skills Development Authority (Tesda), a real estate agent, and a close friend of Pacquiao.

Former government officials, appointed and elected, are also vying for party-list seats in the May 2016 polls. Among them are ex-Armed Forces chief Victor Ibrado and former Negros Oriental vice governor Apolinario Arnaiz Jr.

Some colorful, prominent and controversial personalities are likewise running for public office under the party list. These include actor Cesar Montano and lawyer Harry Roque.

Nevertheless, many party-list nominees are from organizations that have been active in helping the marginalized and pushing passionately for their respective causes.

For instance, Hope Hervilla, the 3rd nominee of Bayan Muna, is a citizen journalist and activist leader. She is the founder of Voices of Hope, a collective of citizen journalists writing about the aftermath and the recovery in areas devastated by Super Typhoon Yolanda in 2013.

Sarah Jane Elago, 1st nominee of Kabataan party list, is the president of the National Union of Students in the Philippines (NUSP).

Forty-one of the 43 winning groups in the 2013 party-list election want to be part of the 17th Congress, with a term from 2016 to 2019. The remaining two groups, Senior Citizens and Ating Koop, still don’t have representatives in the Lower House due to pending resolution of their cases before the courts.

Out of the 55 incumbent party-list representatives belonging to these groups, at least 33 are seeking reelection: 21 are running for a second term, and 12 for a 3rd term.

The list above excludes Representative Raymond Democrito Mendoza of the Trade Union Congress Party (TUCP). Despite being on his third and last term, he remains the first nominee of one faction of TUCP. In 2014, it was reported that Mendoza would be replaced by Roland de la Cruz, the 1st nominee of another TUCP faction. But as of this posting, Mendoza remains on the roll of Lower House members.

Twelve former party-list representatives are aiming for a return to Congress:

Four ex-district representatives are planning to stage a comeback as well, but through the party list. All are first nominees of their respective groups:

Six party-list groups submitted two sets of nominees to the Comelec. This is mainly due to infighting between factions in these groups.

How the party-list election works

In a nutshell, voters choose one among the 115 party-list groups on the official ballot. The winning groups earn a seat (or seats) in the Lower House based on a computation, taking into account the number of votes each group garnered.

Only the party-list groups’ names, however, will appear on the ballot; the list of nominees of each group is posted separately on the Comelec website. These lists are submitted to the Commission on Elections (Comelec) months before the polls.

The winning groups then send their nominees to Congress, based on the number of seats they earn and going by the nominees’ order on the list. – Rappler.com