The many firsts of president-elect Duterte Facebook Twitter Copy URL
Copied
Davao City Mayor Rodrigo Duterte, who is currently enjoying an insurmountable lead in the elections, is set to be the oldest Philippine president

MANILA, Philippines – Rodrigo Duterte, presumptive president and expected winner of the 2016 elections, has given so much color to the Philippine presidential race.

The Davao City mayor is such a character that he made many sit at the edge of their seats each time he spoke. He made headlines in both local and international media.

The popularity of the tough-talking Duterte cuts across socio-economic classes. The overwhelming support became evident on election day as Duterte’s lead became insurmountable.

The battle cry of Duterte’s supporters throughout the campaign period, “#ChangeIsComing” may or may not come true. His anticipated presidency sets many firsts in the history of Philippine presidents.

Rodrigo Duterte will be the first president to take a huge leap across government positions. From being a local chief executive of Davao City for 21 years, he is set to be the 16th president of the Philippines. Former president Joseph Estrada was first mayor of San Juan before he became senator, vice president, and then president.

When term limits hindered his seeking the mayoral post, Duterte served as the city’s 1st district representative from 1998 to 2001. Afterwards, he became vice mayor from 2010 to 2013 to his daughter, Sara Duterte.

Duterte will become the first president from Mindanao in a roster of 3 Visayans and 12 Luzon-bred presidents.

Although born in Maasin, Leyte, Duterte grew up in the Mindanao province of Davao. His father, Vicente Duterte, served as Davao provincial governor.

It was in Davao where he made his mark in the local political arena after being appointed officer-in-charge vice mayor after the 1986 People Power Revolution. Prior to entering politics, he worked as city prosecutor.

Duterte’s roots in Mindanao translated to a solid support base throughout his candidacy. In various pre-election surveys, he was the overwhelming top choice of Mindanao residents. Despite Mindanao being a known stronghold of the ruling Liberal Party (LP), many local officials have jumped ship to Duterte’s camp.

In April 2016, in fact, he declared that he is the “Moro people’s president.”

Days before the period of filing of candidacy, the other aspiring presidential candidates were already known. It was a different case with Duterte, the reluctant candidate.

The Davao city mayor left supporters and the media – practically the whole Philippines – guessing on whether or not we would run.

The period of filing of certificates of candidacy (COC) ended without Duterte in sight. Instead, on October 15, his aide filed his COC for the Davao City mayor.

More than a month later on November 27, Duterte withdrew his candidacy for mayor and had his representative file his COC for president under PDP-Laban. He substituted for Volunteers Against Crime and Corruption (VACC) chairperson Martin Diño. Substitution is allowed under Comelec rules. 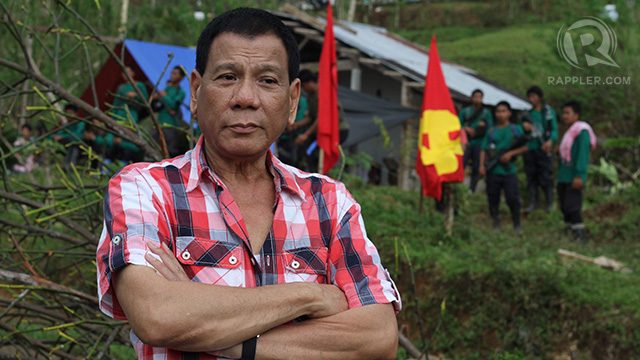 Duterte has been tagged as a communist, considering his connections – and sometimes friendship – with people from the New People’s Army (NPA) and Communist Party of the Philippines-National Democratic Front (CPP-NDF) founder Jose Maria Sison.

The Davao City mayor, during previous mayoral elections, put left-leaning candidates in his city council slate and allowed a hero’s burial and funeral march for NPA leader Leonardo Pitao or Kumander Parago. He also gave money to an NPA camp in the aftermath of Typhoon Pablo in 2012. (READ: 22 things to know about ‘Duterte Harry’)

As part of his platform on peace and order, Duterte even said he will “not kill NPA members.”

During his miting de avance on May 7, he said he will “become the Left-leaning president” even as he described himself as “left-of-center or socialist.”

Despite his stance against crime and perceived circumventions of the law, Duterte’s supporters argue he is a lawyer so he knows what he’s doing.

Once sworn into office come June, Duterte will be the first lawyer-president since Ferdinand Marcos.

First with a pending plunder case

Aside from changing his usual routines once he becomes president, Duterte has to worry about a plunder case hanging over his head.

Weeks prior to the May 9 polls, vice presidential hopeful Antonio Trillanes IV accused him of having transactions in one bank account amounting to P2.4 billion. The alleged amount of transactions did not match the Davao City mayor’s Statement of Assets, Liabilities, and Net Worth (SALN).

Former president Estrada is the highest ranking public official charged with and convicted for plunder. He, however, was no longer president when the plunder case was filed against him in 2001. (READ: Plunder cases: Highs and lows) 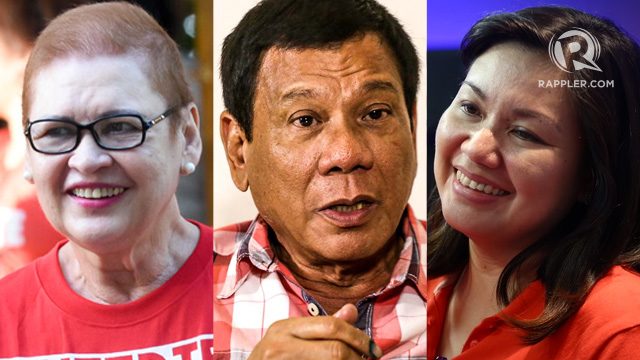 Duterte was married to Elizabeth Zimmerman – the mother of his children Sara, Paolo, and Sebastian Duterte – for 27 years. In 1998, Zimmerman filed for annulment with the Regional Trial Court in Pasig and got approval two years later in 2000. (READ: ‘Philandering’ Rodrigo Duterte cause of marriage annulment)

Zimmerman, who is suffering from stage 3 breast cancer, remains a friend to Duterte. She even helped out in his campaign as part of the “Byaheng DU30” caravan with daughter Sara, while Duterte constantly checks on her health.

Despite being a self-confessed ladies’ man, Duterte still lives with common-law wife Cieleto “Honeylet” Avanceña with whom he has a daughter, 11-year-old Veronica.

At 71 years old, Duterte is set to be the oldest – and the first septuagenarian – president of the Philippines. Before him, Osmeña was the oldest at 66 years old when he became president in 1944.

Quite unpredictable, Duterte may yet show more firsts during his term. – Rappler.com