Why Congress needs to canvass votes for president, VP Facebook Twitter Copy URL
Copied
Why does Congress need to canvass votes for president and vice president before proclamation? What are the processes involved?

MANILA, Philippines – Because elections are now automated, winners are known just days after elections. Yet the winner can’t be proclaimed without the votes being counted in Congress.

Why does it have to take that long, arduous process? Because it’s mandated by the 1987 Constitution. Section 4, Article VII says:

The returns of every election for President and Vice-President, duly certified by the board of canvassers of each province or city, shall be transmitted to the Congress, directed to the President of the Senate. Upon receipt of the certificates of canvass, the President of the Senate shall, not later than 30 days after the day of the election, open all the certificates in the presence of the Senate and the House of Representatives in joint public session, and the Congress, upon determination of the authenticity and due execution thereof in the manner provided by law, canvass the votes.

A story published by Newsbreak in 2004, explained that this provision had been incorporated as early as in the 1935 Constitution. Back then, it was specified that election returns must be transmitted to the National Assembly for counting. The Constitution was later on amended to give power to the Senate President who will “in the presence of the Senate and the House of Representatives, open all the certificates; and the votes shall then be counted.”

With the Batasang Pambansa replacing the Senate and House of Representatives in the 1973 Constitution, documents for canvassing were transmitted to the Speaker instead of the Senate President.

Framers of the 1987 Constitution returned this power to the Senate president after the controversial 1986 snap elections, when then House speaker Nicanor Yñiguez immediately announced the results and proclaimed Ferdinand Marcos as the reelected president.

Back when the country had manual counting of votes, Congress received physical documents as election returns, which they had to manually tally and count. According to the same Newsbreak story, this raised questions about defective and unauthenticated documents. Proclamations then took a very long time due to the manual processes. In the 2004 presidential elections, Gloria Macapagal Arroyo was proclaimed on June 23 – just a week before the Office of the President was officially vacated on June 30.

With elections now automated, canvassing is easier for Congress although they will still receive physical election results via certificates of canvass (COCs) from provincial and city canvassers.

In addtion to that, Congress now has a computerized consolidation and canvassing system which receives election results from city/municipal and provincial canvassing centers.

The diagram below shows that election machines transmit results to the central server, to a transparency server, and to the municipal board of canvassers (MBOC). 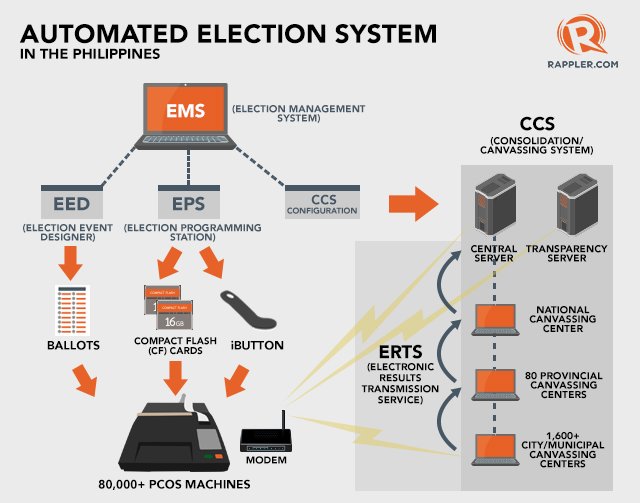 The country’s first automated elections recorded a very quick timeline of canvassing and proclamation of a new president and vice president. With the elections conducted then on May 10, canvassing took only 8 days – from May 27 to June 8.

But while the canvassing process may take only a short time, the delay in the proclamation may come from other issues that might be raised in Congress.

In a report by the Philippine Star, House Majority Leader Neptali Gonzales ll said the very tight vice-presidential race could delay the official canvass. Candidate Leni Robredo leads by a very small margin over opponent Ferdinand “Bongbong” Marcos based on the partial and unofficial count by the Commission on Elections. – Rappler.com