Spare tire or not? The role of the Philippine vice president 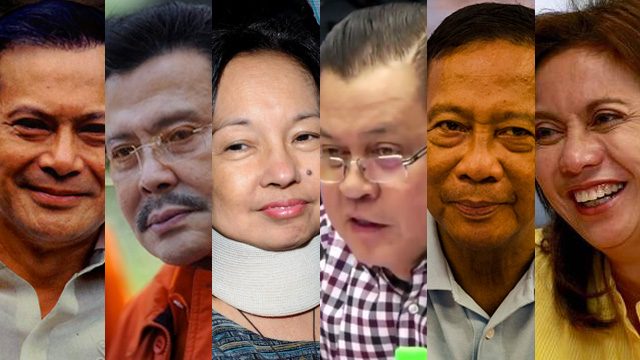 MANILA, Philippines – A vice president has been tagged as a “spare tire”, among other terms that connote someone just waiting for the president to step down.

Strictly speaking, according to the 1987 Philippine Constitution, the vice president is really on standby to take over the presidency if the need arises.

Article VII Section 8 of the Constitution says that the vice president shall serve the remaining days of a president’s term “in case of death, permanent disability, removal from office, or resignation.”

A vice president can also function as an acting president, according to Article VII Section 7, in two instances: (1) if the elected president failed to qualify or (2) if a president has not been chosen.

The vice president is governed by the same set of qualifications as a president, as outlined in Article VII Section 2 of the 1987 Constitution. This includes being a natural-born citizen of the Philippines, a registered voter, able to read and write, at least 40 years of age on the day of elections, and a Philippine resident for at least 10 years.

A vice president also serves for 6 years per term. However, unlike the president who is barred from reelection after one term, a vice president can serve for two consecutive terms.

But being a spare in case the president steps down is not the only thing a vice president could do. He or she can also assume another position and be part of the Cabinet.

However, this depends on the president’s decision on whether or not to offer a Cabinet position to his vice president.

Article VII Section 3 of the 1987 Philippine Constitution, after all, only states that the vice president “may be” appointed to the Cabinet. It does not mandate or direct the appointment.

But the official website of the Office of the Vice President (OVP) lists some other functions:

In the past weeks, President-elect Rodrigo Duterte has declared his choices for his incoming Cabinet. However, an important name was missing: his Vice President-elect Leni Robredo.

The Davao City mayor, on May 31, said that his being “non-committal” in offering a Cabinet position to Robredo was due to his not wanting to hurt the feelings of defeated VP candidate – and Robredo’s closest rival – Ferdinand Marcos Jr. (READ: Duterte: No Cabinet post for VP Robredo yet)

Duterte’s recent pronouncement, however, contradicted what his campaign spokesman Peter Laviña hinted at before the proclamation of winners. He said that Duterte was going to reserve Cabinet positions for the prospective candidate and even used the pronoun “she.”

Robredo herself has said that she will fulfill her duty despite not a member of Duterte’s Cabinet.

If final, Duterte’s decision will make her only the second vice president who did not hold any department, agency, committee, or task force in government.

Diosdado Macapagal did not hold a Cabinet position while serving as vice president to Carlos P. Garcia from 1957 to 1961.

It was a blessing, however, for Macapagal as without a Cabinet position or agency to look after, he was able to go around the Philippines and make himself known to the Filipino people. He won the 1961 presidential elections with 3,554,840 votes against Garcia’s 2,902,996.

Macapagal is one of the 6 vice presidents who eventually became president: Osmeña, Quirino, Garcia, Macapagal, Estrada, and Arroyo.

Robredo, however, has publicly declared more than a few times that she does not aspire for the presidency. But with an unpredictable arena that is Philippine politics, we will never know what the next 6 years will bring. – Rappler.com