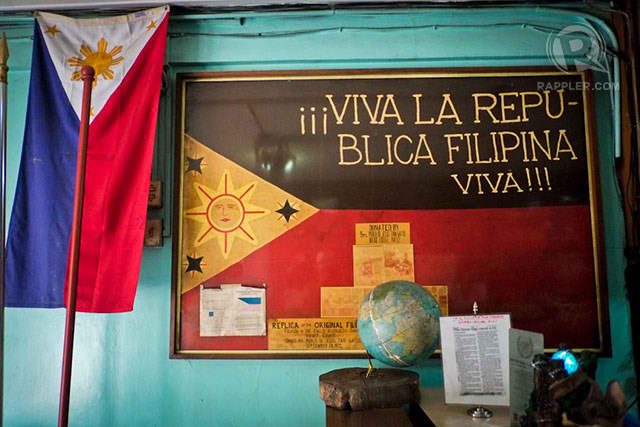 REPLICA. The original Philippine flag of 1896 at the headquarters of the International Flag House. Photo by George Moya/Rappler

Facebook Twitter Copy URL
Copied
May 28 to June 12 mark the Flag Days in the Philippines. How much do you know about the country's national flag?

MANILA, Philippines – Did you know that the country celebrates Flag Days for two weeks in the lead up to our Independence Day celebration?

Section 26 of Republic Act 8491, or the Flag and Heraldic Code of the Philippines, says May 28 to June 12 mark the official celebration of Flag Days, culminating in the celebration of Independence Day.

On these days, all Filipinos are encouraged to display their Philippine flags.

Why start on May 28? It was on this day in 1898 when the Philippine flag was first unfurled after the Philippine Revolutionary Army won over the Spanish forces in the Battle at Alapan in Imus, Cavite.

Despite years of learning about the Philippines and its emblems in history classes and various reading materials, there may still be a lot to discover.

For one, the document, The Act of the Proclamation of Philippine Independence (Acta de la proclamacion de independencia del pueblo Filipino), written by lawyer and author Ambrosio Rianzares Bautista, defies and challenges most of what we know about the Philippine Flag.

On the three stars

Contrary to common belief, the 3 stars actually represent the islands of Luzon, Panay and Mindanao, and not Luzon, Visayas, and Mindanao.

The Proclamation of Independence in 1898 referred to these 3 as the “archipelago’s three principal islands” where the revolution started, and not the “principal grouping of islands”.

At that time, the island of Panay was treated as the Visayan center of the revolutionary movement.

On the white triangle

The color white is often seen as a symbol of purity. But the white triangle actually represents the Katipunan, which, through the blood compact, compelled the masses to rise in revolt.

It also refers to the “Eye of Providence”, the all-seeing eye which went on to inspire the Katipunan’s ideology.

On the sun and its rays

The first flag used from 1896 up to 1901 had an anthropomorphic sun with a face, a recurring symbol in masonic rites.

Sewn in Hong Kong by Filipino expatriates and eventually brought to the Philippines by Emilo Aguinaldo, the flag was made tri-colored, featuring blue and red with a white triangle on the left side framing 3 yellow stars, along with the anthropomorphic 8-rayed sun.

However, in the original version of the document – and even in its English translation – there was no mention of Tarlac as part of the 8 rays. Instead of Tarlac was Bataan.

The designers of the flag decided to use the same colors of the United States flag – red, blue, and white – to honor its “disinterested protection” of the Philippines.

In fact, there were many propositions and revisions in the colors, specifically with the shade of blue.

Executive Order No. 1010 in 1985 changed the flag’s blue shade from navy blue to pale sky blue. Historians noted that this change was influenced by the available clothing supplies at the time.

This change of color was unknown to many.

After the EDSA Revolution in 1986, President Corazon Aquino reinstalled the original navy blue color through Executive Order No. 292.

In 1998, the shade of blue was reverted to royal blue – the color used during the Commonwealth time – as part of the specifications observed up until today. – Rappler.com