When ex-presidents skip the SONA

Jul 15, 2018 2:07 PM PHT
Michael Bueza
Facebook Twitter Copy URL
Copied
(3rd UPDATE) While they are not required to attend, former presidents can be invited to hear the incumbent's State of the Nation Address in person 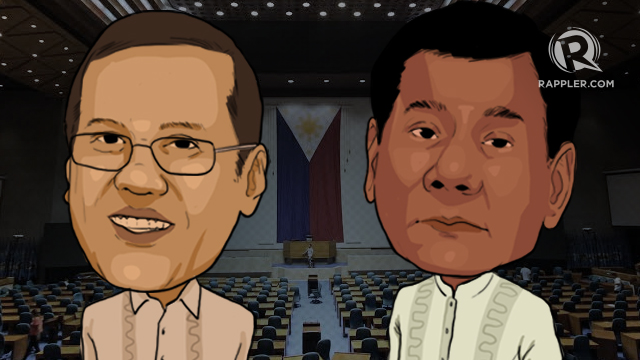 MANILA, Philippines (UPDATED) – Former presidents, while not required to attend, have been invited to the State of the Nation Address (SONA) following traditions and protocol.

They join the crowd of government officials and diplomats, among other guests, who listen to the incumbent president’s address at the House of Representatives.

But due to circumstances – either political or otherwise – there had been instances when ex-presidents were absent or declined to hear their successor’s address in person.

Former President Benigno Aquino III has not attended Duterte’s SONA since 2016. This year is no different.

He did not show up in the first SONA of Duterte in 2016 despite being invited. He told the Philippine Star that he “will watch it (SONA) on the TV to be able to concentrate on its content.”

In 2017, a week before Duterte’s 2nd SONA, Aquino told Rappler in an interview that he would also skip the event, citing the same reason. In 2018, the committee handling invitations to the SONA told Rappler that Aquino sent a non-confirmation of attendance.

Aquino’s non-attendance could be due to a desire to prevent an awkward interaction with his predecessor, Gloria Macapagal-Arroyo, whom he had routinely criticized and whom his administration jailed for alleged corruption.

Arroyo attended Duterte’s 1st SONA, along with former presidents Fidel V. Ramos and Joseph Estrada. She is expected to attend the 2017 SONA, being a member of the House of Representatives.

Arroyo was absent in all of Aquino’s 6 SONAs before Congress, despite being the elected congresswoman of Pampanga’s 2nd district.

In 2010 and 2011, she decided to skip Aquino’s address, where her presidency was among those criticized. But from 2012 onwards, she was under hospital arrest for cases filed against her.

Only in 2016 did Arroyo walk free, when the Supreme Court acquitted her of plunder and ordered her release from detention.

Estrada also snubbed all of Arroyo’s SONAs. In 2001, Estrada was ousted from the presidency via another People Power revolution dubbed EDSA Dos, and installed then-Vice President Arroyo as the new president.

Estrada only started to attend in 2010, during the 1st SONA of President Aquino.

He was in each of Aquino’s SONAs, except in 2014, when Aquino did not mention him as present in the House session hall. Coincidentally, that was the year when Estrada’s son and then-Senator Jinggoy Estrada was arrested in connection with the pork barrel scam associated with businesswoman Janet Lim Napoles.

Jinggoy Estrada remains in detention in Camp Crame for plunder charges, while Napoles has been convicted and sentenced to up to 40 years for illegally detaining her long-time aide Benhur Luy, who turned whistleblower.

Ramos, on the other hand, has attended the SONAs of his successors since he left office in 1998. He, however, missed Arroyo’s 2nd SONA in 2002 due to his speaking engagements in the United States. – Rappler.com