EXPLAINER: How serious is the PH drug problem? Here’s the data

Aug 27, 2016 6:04 PM PHT
Students From Up*
Facebook Twitter Copy URL
Copied
This could help contextualize the country’s drug problem and put in perspective the government’s response 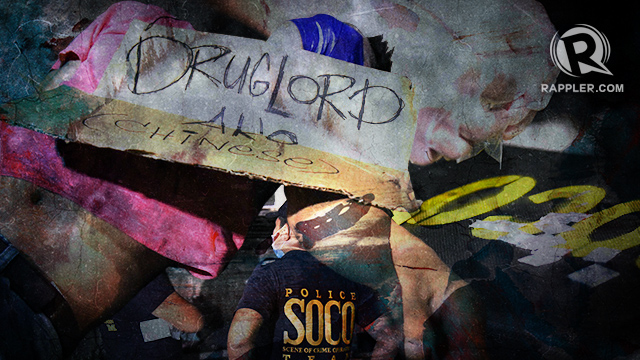 MANILA, Philippines – The aggressive war against illegal drugs is one issue where instinct and emotion – rather than facts and reason – have unfortunately taken hold on many fronts.

Whether in the streets, the Senate halls, or our Facebook feeds, the discussions surrounding this drug war have resulted in an unprecedented level of discord and misunderstanding among Filipinos.

Before the drug war, the death toll, and the animosity in social networks escalate any further, perhaps now would be a good time to step back, breathe deeply, and look at the facts and figures surrounding the nature and extent of the country’s drug problem.

For this purpose, we have compiled key drug-related statistics from relevant government agencies. These could help contextualize the country’s drug problem and put into perspective the government’s response. Everyone is invited to look at and verify these data. References and links are provided below.

1) The latest official estimate of drug users in the country is 1.3 million as of 2012.

Perhaps the first relevant statistic in any drug war is an estimate of the extent of drug use. After all, drug-related crimes ultimately stem from drug use.

In his first State of the Nation Address, President Rodrigo Duterte said that, based on data from the Philippine Drug Enforcement Agency (PDEA), there were about “3 million drug addicts” in the country “two or 3 years ago,” and possibly 3.7 million now.

However, a closer look shows that relevant drug law agencies came up with much lower official statistics in recent years (see Figure 1).

In 2008, a survey conducted by the Dangerous Drugs Board (DDB) estimated a much lower figure of 1.7 million drug users nationwide (1.9% of the 2008 population). In 2012, the DDB in cooperation with the Philippine Normal University came up with a separate study that put the figure to be even lower at 1.3 million (1.3% of the 2012 population). 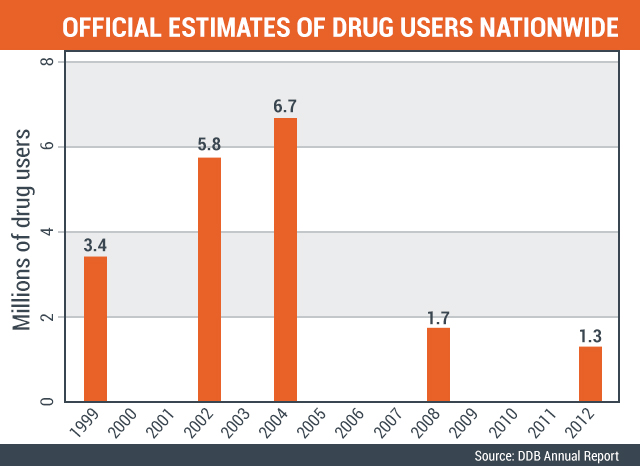 Both figures actually represent a huge decline of drug users from the 6.7 million reported by the DDB way back in 2004. It appears, then, that the extent of drug use in the country seems to have actually gone down from 2004 to 2012 (6.7 million to 1.3 million) – or a total decline of 81% in 8 years.

Of course, measuring drug use is complicated and estimates can be subject to wide margins. It has also been 4 years since the 1.3-million estimate of the DDB, and drug use may have increased or decreased since then.

Thankfully, the DDB is set to release soon its latest estimates of drug use for 2015. This could provide a valuable benchmark against which the Duterte administration can measure the progress of its drug war.

2) The number of drug-related raids and arrests in 2014 were the highest in a decade.

The data also show that gains in drug law enforcement were made in the past few years (see Figure 2).

First, note there was a significant drop in drug arrests and raids around 2004, and the trend started to increase around 2013. In fact, the number of drug raids and arrests conducted by PDEA in 2014 was the highest since 2004 and 2006, respectively. The number of admissions into drug rehabilitation centers also increased to more than 10,000 in 2014. 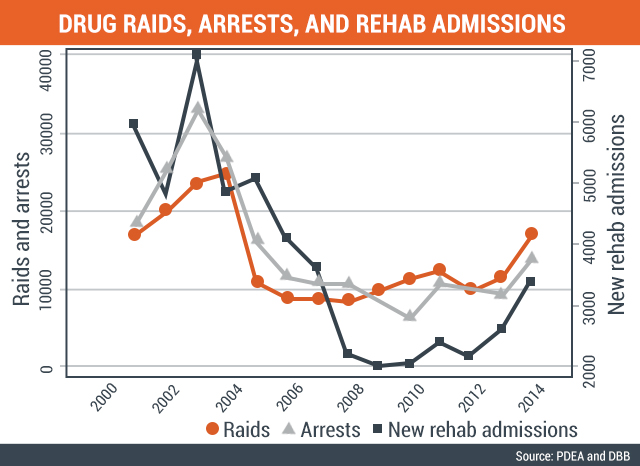 What can explain these correlated trends? Could they be an indication of the changing aggressiveness of past administrations in going after drugs? Or could they be indirect measures of the rise and fall of the drug problem on the ground? Understanding the causality (rather than just the correlations) behind these trends highlights the need for further research.

Incidentally, the number of marijuana plantation sites eradicated by the PDEA in 2014 (506 sites) were also at an all-time high in 2014 (see Figure 3). This would suggest that at least some credit should go to the drug law enforcement agencies in helping reduce drug supply over the years and using data to monitor such progress. 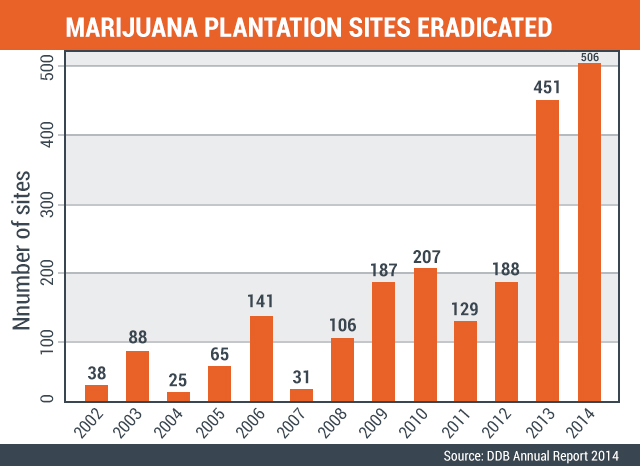 3) Rehab patients tend to be male, poor, and addicted to shabu.

Lastly, we can learn more about the nature of drug use in the country by looking at the profile of drug users in rehabilitation centers.

Of course, not all drug users have the opportunity to undergo rehab, and the following figures may not be representative of the average drug user in the country. But still, the administrative data collected by the DDB give a number of useful insights. We summarize some of these below. 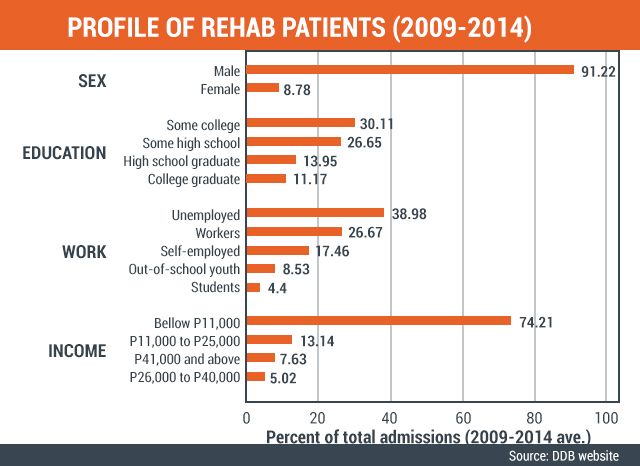 Finally, Figure 5 shows that, as of 2012, patients who entered rehab reported shabu and marijuana as the primary drugs that they abused. 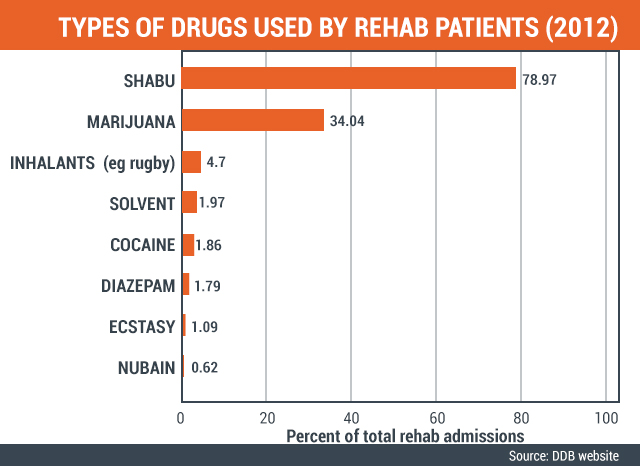 By looking at the profile of rehab patients through the lens of statistics, the Duterte administration can better target its interventions and make better use of its resources for both prevention and rehabilitation. (READ: San Miguel Corporation’s 1-billion donation for rehab centers)

As the momentum of the current drug war increases, let’s all keep in mind why we are doing it in the first place: to reduce the prevalence of drug use.

There are two primary ways of doing it: by reducing drug supply or reducing drug demand. But at a more fundamental level, even before we decide which strategy is better, it will do well for everyone to step back and contemplate first the current nature and extent of drug use using all available information.

Policymaking around the world is becoming increasingly evidence-based. The same should apply to the country’s current drug policy. Here’s hoping that the statistics on drug use play a more prominent role in future discussions and evaluations of the intensifying drug war. – Rappler.com

The authors are a group of graduate students from the University of the Philippines. Their views are independent of the views of their affiliations. They requested anonymity.