MANILA, Philippines – The Libingan ng mga Bayani (Heroes’ Cemetery) has been at the center of the public’s attention recently, as various parties object, rally, and petition against President Rodrigo Duterte’s plan to give former president Ferdinand Marcos a hero’s burial.

Though the Supreme Court (SC) recently issued a status quo order that temporarily prevents any action from taking place, Duterte remains firm on his stance that Marcos’ burial is a matter of upholding the law.

Until the SC releases its final decision on the matter while oral arguments are set to be conducted on Wednesday, August 31, here’s everything you need to know about the contested resting place of heroes.

Established in 1947, Libingan ng mga Bayani was first known as the Republic Memorial Cemetery. It was established by the Philippine government to commemorate the lives of the fallen Filipino soldiers who fought in World War II.

Its existence was in accordance with Republic Act 289, which provides for “the construction of a national pantheon for presidents of the Philippines, national heroes, and patriots of the country.”

The law, signed by President Elpidio Quirino, states that the cemetery is supposed to commemorate the presidents, national heroes, and patriots, “for the inspiration and emulation of this generation and of generations still unborn.”

The initial construction was given a funding of at least P1 million.

In 1954, then president Ramon Magsaysay “rededicated and renamed” the cemetery into what it is now known: Libingan ng mga Bayani.

Marcos, through Proclamation Number 208 in 1967, reserved 142 hectares from the Fort Bonifacio Military Reserve for the future expansion of the Libingan ng mga Bayani. Much has been said regarding individuals who can be buried in the Libingan ng mga Bayani.

According to the Armed Forces of the Philippines (AFP), which holds and oversees the property, there are specific guidelines that state who exactly can be buried at the Libingan ng mga Bayani.

Based on the The Allocation of Cemetery Plots at the Libingan ng mga Bayani, the following can be interred at the cemetery:

Worth noting is AFP Regulations G 161-375, which says the prohibition of interment applies to “those who have been dishonorably discharged from service or personnel convicted of an offense involving moral turpitude.”

Executive Order No. 131, signed by then president Fidel V. Ramos in 1993, allowed for state burial and funeral of national artists and scientists of the Philippines.

The 103-hectare cemetery, located in Taguig City, currently houses the remains of more than 49,000 Filipino soldiers, statesmen, heroes, and martyrs.

A specific number of grave sites is also allocated to individuals who are qualified to be buried in the cemetery.

According to the AFP, the allocations for each position are as follows:

The remaining grave sites, meanwhile, are designated for retired AFP personnel and veterans. 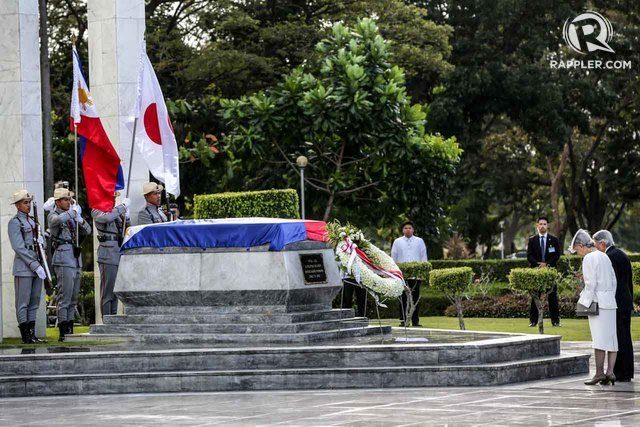 Scattered across the vast land are several memorials for individuals who fought in the wars the Philippines fought.

The Tomb of the Unknown Soldier, considered as one of the main structures, can be found at the center of the cemetery bearing the inscription: “Here lies a Filipino soldier whose name is known only to God.”

The memorial, which features 3 pillars representing the 3 island groups in the Philippines, is often the place where government officials conduct wreath-laying ceremonies.

The Korean Memorial Pylon, meanwhile, serves as a tribute to the fallen members of the Philippine Expeditionary Forces to Korea (Peftok) during the Korean War.

The Vietnam Veterans Memorial Pylon is dedicated to Filipinos who served during the Vietnam War as part of the Philippine contingents and Philippine civic action groups.

Erected by the Veterans Federation of the Philippines, the Philippine World War II Guerrillas Pylon serves as “a testimony to the indomitable spirit and bravery of the Filipino guerrillas of World War II who refused to be cowed into submission and carried on the fight for freedom against an enemy with vastly superior arms and under almost insurmountable odds.”

The Defenders of Bataan and Corregidor Memorial, meanwhile, was erected in 1977 in memory of those who served during World War II.

Lastly, the Black Stone Walls erected near the Tomb of the Unknown Soldier bear the words of General Douglas MacArthur: “I do not know the dignity of his birth, but I do know the glory of his death.” – Rappler.com

Paco Tantoco is a Rappler intern.