How to seek drug treatment and rehabilitation in the Philippines Contrary to what a number of people believe, individuals suffering from illegal drug addiction can still turn their lives around if they seek help immediately. (EXPLAINER: How serious is the PH drug problem? Here’s the data)

As President Rodrigo Duterte’s anti-illegal drug campaign shows no sign of slowing down, the number of drug personalities voluntarily surrendering to authorities is still on the rise under Project TokHang.

Project TokHang – a contraction of “toktok” and “hangyo” or the Visayan words for “knock” and “request”, respectively – refers to the strategy of the police nationwide to go house-to-house in their jurisdictions and convince known drug pushers and users to surrender and change their ways.

As of Saturday, September 17, data from the Philippine National Police (PNP) shows that 714,217 people have surrendered. Out of this number, 53,017 are drug pushers while 661,200 have admitted to using illegal drugs. (IN NUMBERS: The Philippines’ ‘war on drugs’)

The ways with which the Philippine government has been addressing the overwhelming number of drug surrenderees varies. There has likewise been no shortage of proposals from various government officials on how to proceed with drug treatment and rehabilitation of drug users.

Under the Comprehensive Dangerous Drugs Act of 2002, an individual found to be positive for use of any illegal drug should undergo a minimum of 6 months of rehabilitation in a treatment center.

How can an individual seek drug treatment and rehabilitation in the Philippines – whether voluntarily or not? Rappler lists the steps based on guidelines from the Dangerous Drugs Board (DDB):

1. A person, the drug user himself or his family, should obtain a referral form for a Drug Dependency Examination (DDE) to determine the level of a drug user. This is available at the Central Screening and Referral Unit (CSRU) at the Rizal Medical Center in Pasig City. If the drug user is outside Metro Manila, he or she may coordinate with the local Anti-Drug Abuse Council for assistance.

2. The drug user has to undergo the DDE conducted by a physician accredited by the Department of Health (DOH). The DDE determines a person’s level of drug use: (1) experimenter, (2) social recreational user, (3) habitual user, (4) drug abuser, and (5) drug dependent.

3. If found to be a drug abuser or drug dependent (4th and 5th levels), a certification, together with other requirements, should be submitted to the Legal Affairs Division of DDB either by the parents, guardians, or spouse of the user. Other requirements include police clearance, barangay clearance, and a certificate of no pending case from the Regional Trial Court (RTC).

If the drug dependent is a minor and has a pending case in court, he or she, together with his or her guardian, must secure a Certification of Suspended Sentence from the RTC where the case is filed. Those found to fall under the 1st, 2nd, and 3rd levels can avail of out-patient services such as counseling.

4. The drug dependent or a family member must fill out an application form and have it notarized as requirements for the petition for confinement. The form will then be filed with an RTC in the area where the drug dependent resides. If the drug dependent is a minor, parents or guardian can submit in his or her behalf.

In case of compulsory confinement, the family member of a drug dependent must execute an affidavit indicating that they are submitting the alleged drug dependent for treatment and rehabilitation. DDB will prepare a petition for confinement and file the same with the RTC. Drug dependents who cannot afford a lawyer can avail of free legal counsel and representation from Public Attorney’s Office (PAO) lawyers nationwide.

Each treatment and rehabilitation center employs a treatment modality in its program. (READ: What’s a day like inside a private drug rehab center?) According to DDB, there are currently 5 modalities which can be applied to drug dependents: multidisciplinary team approach, therapeutic community approach, Hazelden-Minnesotta model, spiritual approach, and eclectic approach. 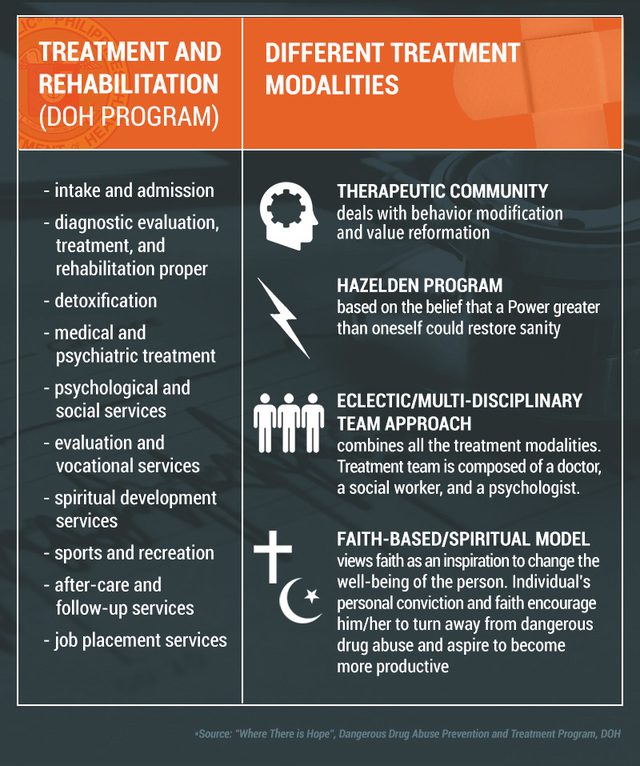 Duterte’s war on drugs continues to intensify with the number of drug users and pushers who end up either dead or behind bars rising each day.

As of Saturday, September 17, data from PNP’s Oplan Double Barrel shows that 17,319 suspected drug personalities have been arrested while 1,138 have been killed in legitimate police operations.

Meanwhile, there are already 2,035 victims of extrajudicial or vigilante killings as of Wednesday, September 14. This brings the total number of persons killed in Duterte’s war on drugs to 3,173 since he took office. (IN NUMBERS: The Philippines’ ‘war on drugs’)