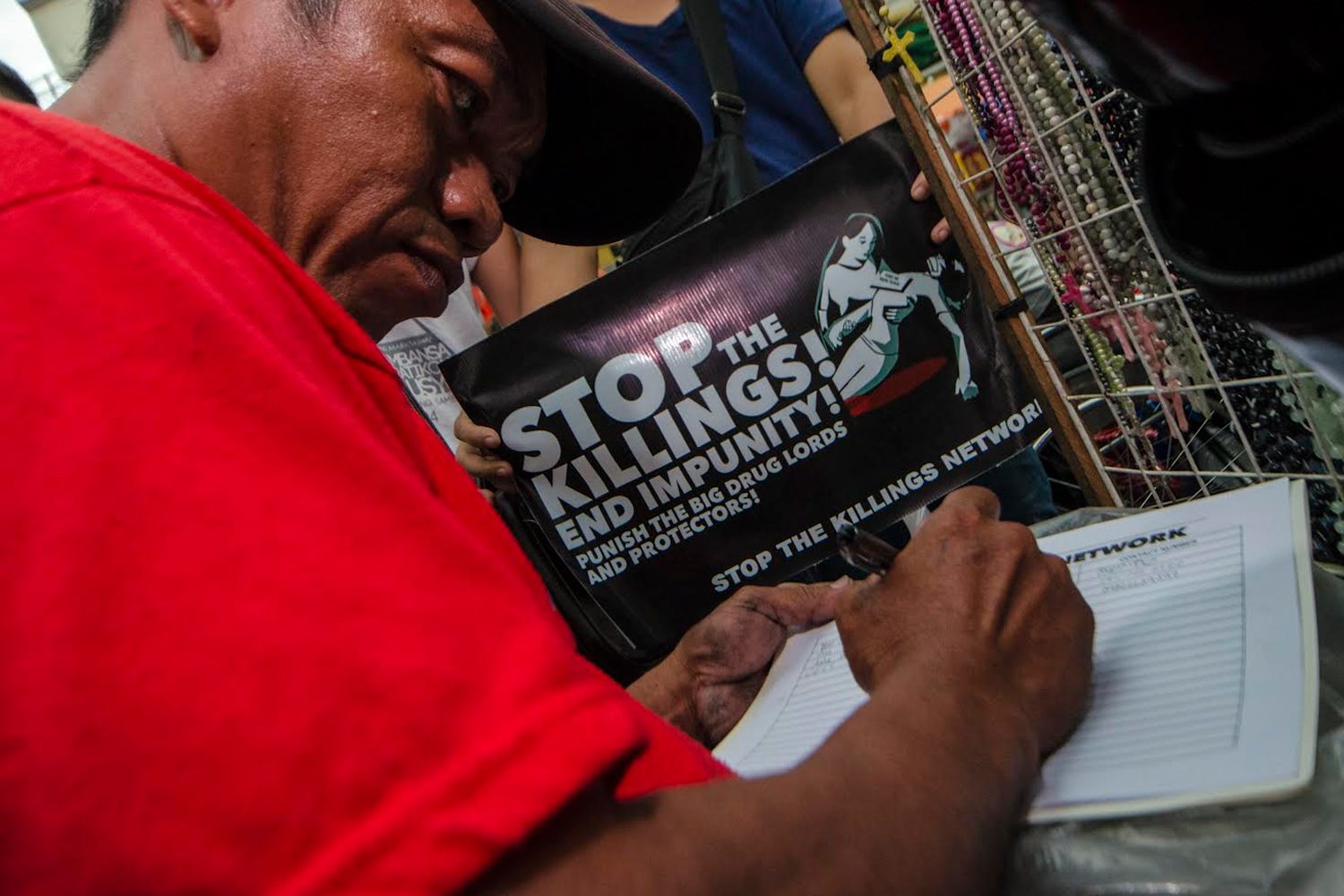 MANILA, Philippines – It has been a common refrain between the government and its critics: the latter decries President Rodrigo Duterte’s “shoot-to-kill” orders against alleged drug users, while the former denies there ever was such a thing.

As human rights groups, international media, and diplomats begin to take increasing notice of the number of drug-related deaths in the Philippines, it comes with criticism against what they perceive as the government’s tacit endorsement of extrajudicial killings.

The harrowing images have been splashed across international news outlets: photos of slain people with their faces wrapped in tape, usually beside a cardboard sign saying: “I’m a drug pusher, do not emulate me.”

But the relatives of some of the victims insist that their loved ones did not fit the profile of a drug user, or were simply at the wrong place at the wrong time.

One US senator said Duterte was endorsing “what amounts to mass murder.” Human rights groups point out that vigilantes have grown emboldened because of Duterte’s many statements defending and even promoting the killing of alleged drug users who fight back.

Even before the start of the campaign period for the May 2016 polls, Duterte had already promised to order the killing of criminals. But he emphasized that this should only be done if they fight back.

This caveat has been the government’s consistent defense against criticism that it endorses extrajudicial killings.

Duterte has long been vocal about his hardliner stance against illegal drugs. His campaign threats to kill drug users, he said, were not rhetorical.

Several months since the May polls, the Philippines is seeing the concrete evidence of that statement: thousands have been killed in Duterte’s bloody war on drugs, some of them under questionable circumstances. (READ: ‘Nanlaban sila’: Duterte’s war on drugs)

In May, shortly after winning the elections, Duterte said he would give security forces “shoot to kill” orders against those who resist arrest.

He also said he would offer million-peso bounties for the capture or death of drug lords.

But he was quick to add: “I’m not saying you kill them but the order is ‘dead or alive.'”

The President has made several pronouncements in the same vein, issuing shoot-to-kill orders but immediately clarifying that it should only be done if the suspects resist arrest.

He has made this call not only to law enforcers, but to ordinary citizens. In June, during a thanksgiving party in Davao City, Duterte endorsed the idea of ordinary civilians engaging in do-it-yourself arrests.

“Kayong nandiyan sa neighborhood ninyo (Those among you in your respective neighborhoods), feel free to call us, the police, or do it yourself if you have the gun, you have my support,” he said.

If a suspect resists arrest, “you can kill him,” Duterte said.

The President added, “Only if your life is in danger, at lumaban, at may baril din at kutsilyo, barilin mo (and there is resistance and the suspect is armed with a gun or knife, shoot). I’ll give you a medal.”

Aside from issuing shoot-to-kill orders, Duterte has vowed to protect the policemen who do their duty, even if they kill a thousand people in the course of their work.

That message was said even during the campaign period, when Duterte said he would pardon policemen convicted of killing criminals and civilians while performing their duties.

In August, the President acknowledged that some of those killed in the war on drugs were victims of extrajudicial killings.

He then echoed the police’s defense, insisting that those killed in police operations all fought back.

In September, however, Duterte’s message took on a different tone. In contrast to his earlier pronouncement that only those who resist arrest should be killed, this time, Duterte told soldiers that criminals should be killed whether or not they fight back.

(If they pull out a gun, kill them. If they don’t, kill them still, son of a whore, so it’s over, lest you lose the gun. I’ll take care of you.)

But it’s unclear whether the President meant it, because he would later flip-flop on his own statement by saying he would never order the military to commit illegal acts.

“Hindi ako mag-order ng illegal. ‘Wag kayong maniwala diyan. (I won’t order anything illegal. Don’t believe that.) I did not order you and the police to perform punitive police action. I have declared war against the drug syndicates in this country. You know what is war. War is war,” he said.

But this shoot-to-kill order has been slammed by critics, including Senator Leila de Lima. De Lima, a former justice secretary and former chairperson of the Commission on Human Rights, said that such an order should only be a last resort of law enforcers.

Senator Panfilo Lacson also agreed with De Lima, saying that shoot-on-sight or shoot-to-kill orders not used for self-defense would be murder.

In the face of mounting criticism over the death toll in the war on drugs, Malacañang has defended itself by saying that extrajudicial killings are not a policy of the Duterte government.

“Notwithstanding the accusations hurled against him, no formal charge of human rights violations has been filed. Alleged EJKs (extrajudicial killings) are not the policy of his administration,” Presidential Spokesman Ernesto Abella said last month.

Abella also told the United Nations that Duterte, as a lawyer and former prosecutor, “knows the limits of the power and authority of the presidency.”

Various groups, such as Human Rights Watch (HRW), pointed out however that Duterte’s statements constitute an “implicit” support of killings in violation of the rule of law.

He added, “President Duterte must publicly recognize that respect for rule of law and fulfilling the human rights of Filipinos extends to all Filipinos, including criminal suspects and those implicated in the drug trade.”

Should the President’s statements be interpreted as a tacit approval of drug-related killings? In his public statements, Duterte is careful to add that killing should be done only if necessary. But with 2,294 victims of extrajudicial killings as of latest figures – and with investigations into these deaths still pending – these drug-related killings remain a cause for concern for the Philippine government. – Rappler.com