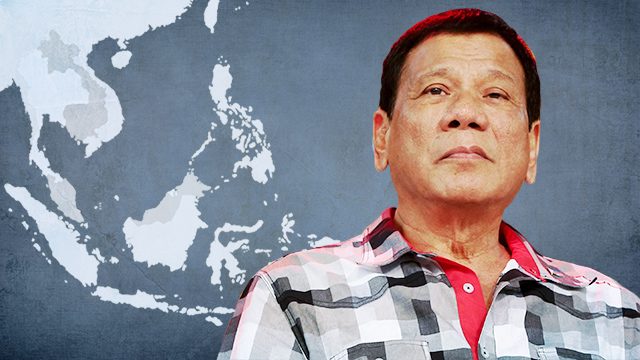 Facebook Twitter Copy URL
Copied
Duterte went to 24 military camps and bases, where he talked to the troops and attended situation briefings. He debuted on the international stage in Laos during ASEAN.

MANILA, Philippines – From military and police camps to summits and festivals, from light moments to serious meetings, President Rodrigo Duterte personally reached out to many Filipinos here and abroad in his first 100 days in office.

His travels across the country have so far spanned from Isabela to Sulu. He gave impassioned talks to soldiers and policemen, comforted mourning families and wounded survivors, and connected with the masses through dinners and speeches.

Below is a map of the places that President Duterte has visited in his first 100 days in office. Click on the top left icon to see the full list. You can also zoom in on the map and click on the icons for more details about each visit.

Notably, Duterte went 27 times to a total of 24 military camps and bases, where he talked to the troops and attended situation briefings. Rappler looked into this occurrence in an article following his 14th visit to a military camp in less than a month.

Duterte also spoke before the police, which plays a key role in his administration’s campaign against illegal drugs.

He has been in the Philippine National Police headquarters in Camp Crame twice: during the assumption of command of PNP chief Ronald dela Rosa on July 1, and at the celebration of the 115th anniversary of the Philippine police service in August. Then, since September 22, Duterte has gone to 3 PNP regional offices in Mindanao.

He has likewise visited the wakes of fallen men in uniform and checked on recovering soldiers in hospitals.

Malacañang Palace in Manila is the President’s official residence, but Duterte returns every week to Davao City, where he served as its longtime mayor. In his home city, he holds office and meetings in either the Department of Public Works and Highways (DPWH) depot compound in Panacan or at the Matina Enclaves.

In Duterte’s first 100 days as president, Davao City had its share of the spotlight in the news.

On September 2, an improvised bomb exploded in the middle of a busy night market in Duterte’s home city killing 14. Duterte, who was in the city at the time, rushed to the explosion site and declared a state of lawlessness nationwide.

On September 18, Norwegian hostage Kjartan Sekkingstad was released by his Abu Sayyaf captors and presented to Duterte and the press there.

The President likewise figured in light and serious moments elsewhere in the country.

Among others, he performed the ceremonial toss in a basketball game featuring the Philippine team, and had solidarity dinners with the poor in Manila and in Davao. He also attended local festivals, graced the opening of power plants and a container terminal, and welcomed back overseas Filipino workers at the airport.

He delivered his 1st State of the Nation Address (SONA) in July at the House of Representatives, met with alleged drug lord Peter Lim in Davao City, and visited a shabu lab in Arayat, Pampanga.

Duterte had traveled to 3 countries in Southeast Asia for international commitments, all taking place in September:

– with reports by Pia Ranada/Rappler.com