What Typhoon Yolanda foreign aid looks like without US, EU, and UN

Oct 9, 2016 8:15 PM PHT
Jodesz Gavilan
Facebook Twitter Copy URL
Copied
Donations from the United Nations, European Union, and the United States in the aftermath of Typhoon Yolanda reached $231,587,655 (P11.19 billion) or 26.77% of the total foreign aid received by the Philippines 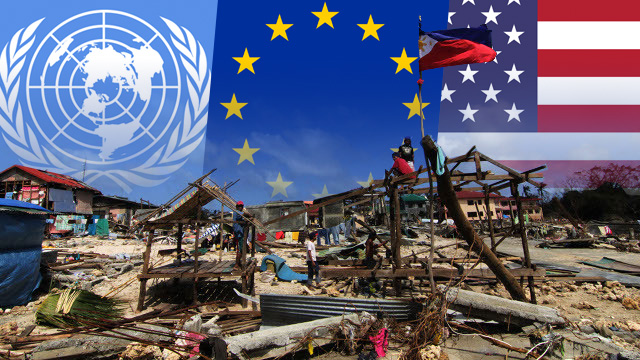 MANILA, Philippines – The United States embassy in Manila recently posted a series of photos and videos depicting the relief operations conducted in several areas across the Philippines.

These relief operations were done in the aftermath of the Zamboanga siege and Super Typhoon Yolanda (Haiyan), both in 2013.

The online posts came amid recent tirades by President Rodrigo Duterte against the US, among other nations, ever since the US became critical of Duterte’s war on drugs.

On Tuesday, October 4, Duterte said he would never “kneel” before the US and even told President Barack Obama to “go to hell.”

The European Union (EU) and the United Nations (UN) have also been targets of Duterte’s invectives, following their criticism of the rising death toll as the administration’s campaign against illegal drugs intensifies.

Many officials have cautioned Duterte to be careful with his words against foreign leaders and international bodies. US Senator Patrick Leahy in September already warned the Philippines of “further conditions” on US aid over the rise of extrajudicial killings.

But Duterte has stayed firm on his stand, even asking other nations to “go away” and “bring their money to somewhere else.”

On Thursday, October 6, Duterte said the Philippines can survive without foreign assistance, telling the US and the EU: “If you think it’s high time for you guys to withdraw your assistance, go ahead. We will not beg for it.”

He added that if ever the loss of aid happens, he would be the first one to go hungry and die but “we will never, never compromise our dignity as Filipinos.”

But what’s really at stake if the US, EU, and UN no longer help the Philippines? What would Filipinos lose, especially during catastrophes?

The support of other countries during natural disasters in the Philippines was notably seen in the aftermath of one of the strongest and most destructive typhoons to hit the country.

Super Typhoon Yolanda claimed 6,201 lives as it tore across the Visayas in November 2013.

For the families in hard-hit communities, there was also more suffering in the days, weeks, and months to come.

Donations from foreign governments and non-governmental organizations, however, poured in for the 1,472,251 affected families and helped ease their burden.

According to the United Nations Office for Coordination (UNOCHA), the total aid given for Yolanda survivors reached $865,151,866 (P41.8 billion).

The top government donor is the United Kingdom with $57,558,810 (P2.8 billion). Other countries and organizations affiliated with the EU also offered donations.

Donations from EU member-states and the EU Commission amounted to $130,493,521 (P6.3 billion) – 11% of the total foreign aid received by the Philippines in the aftermath of Super Typhoon Yolanda.

The huge monetary donations funded several projects in Yolanda-affected areas such as rehabilitation and livelihood programs, among others.

If the UN, EU member-states, and the US did not donate, the Philippines and the survivors of Super Typhoon Yolanda would have received only $633 million (P30.6 billion).

The US, EU, and UN have also given aid to the Philippines to help survivors of other natural disasters.

The EU has also released €74.7 million for emergency relief interventions following natural disasters in the Philippines since 1997.

Aid, however, is not limited to natural disasters.

The US, EU, and UN have been actively supporting the implementation of various projects in the Philippines. These projects are scattered across the country and are usually focused on health, education, peace, poverty alleviation, and food security, among others.

In fact, since 2001, the Philippines has received $1,527,905,996 from the US through the United States Agency for International Development alone. The amount does not include those coursed through other agencies such as the military.

The EU, meanwhile, has given €24.7 million to help victims of armed conflicts in the Philippines since 1997. In 2016, it channeled €1 million to help improve access to quality education in conflict-ridden areas in Mindanao.

The longtime presence of the UN in the Philippines has led to several projects that undeniably improved the lives of many Filipinos.

These projects are implemented through its various agencies such as the World Food Programme (WFP), Food and Agricultural Organization (FAO), and the World Health Organization (WHO), among others. (READ: What did the UN do for PH? Disaster response, health programs, and more) – Rappler.com