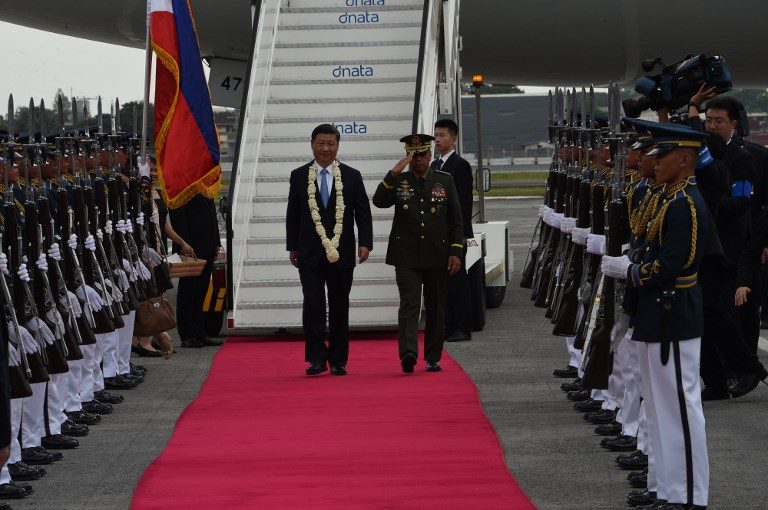 Facebook Twitter Copy URL
Copied
(UPDATED) China's 'One Belt, One Road' initiative is a revival of the ancient silk road trading route that would link Asian markets with economic circles in Europe

Editor’s Note: This story was originally published on October 21, 2016. Rappler is republishing this piece in time for Chinese President Xi Jinping’s trip to the Philippines this month. Follow Rappler’s special coverage of Xi’s state visit to the Philippines.

MANILA, Philippines (UPDATED) – The Philippines is expected to formally join China’s Belt and Road Initiative (BRI) during Chinese President Xi Jinping’s state visit to the Philippines from Tuesday to Wednesday, November 20 to 21.

Philippine Foreign Secretary Teodoro “Teddyboy” Locsin Jr had said a memorandum of understanding (MOU) on the BRI “will be on the table” for President Rodrigo Duterte and Xi to sign.

China’s much-touted “One Belt, One Road” initiative is a revival of the ancient silk road trading route that would link Asian markets with economic circles in Europe.

This “trade and infrastructure network” is seen as the center of China’s “economic diplomacy.”

What is China’s Belt and Road initiative?

China’s “One Belt, One Road” initiative aims to link the economic circles in East Asia and Europe, connecting China – on land and over water – to  partners in Asia, Europe and Africa.

Xi first introduced the concept in 2013 during a visit to Kazakhstan.

Xi said that with nearly 3 billion people inhabiting areas covered by the proposed economic belt, it “represents the biggest market in the world with unparalleled potential.”

The Chinese government said the initiative aims to promote “common development and prosperity and a road towards peace and friendship by enhancing mutual understanding and trust, and strengthening all-round exchanges.”

It added that the “ambitious” initiative requires countries to work together to improve infrastructure in the region, establish a network of free trade areas, create a secure and efficient network of land, sea and air passages, and promote mutual understanding and friendship among countries.

What will it comprise?

According to the vision and action plan released in 2015, the initiative comprises the Silk Road Economic Belt and the 21st Century Maritime Silk Road.

The Silk Road Economic Belt will link China, Central Asia, Russia and Europe (the Baltic). China will be connected to the Persian Gulf and the Mediterranean Sea through Central Asia and West Asia. It will also be connected to Southeast Asia, South Asia and the Indian Ocean.

It will focus on “jointly building smooth, secure and efficient transport routes connecting major sea ports along the Belt and Road.”

China has secured the support of several countries along the route of the proposed economic belt. In February 2014, China reached a consensus with Russian President Vladimir Putin on the construction of Russian railways across Europe and Asia.

China has also announced that it would pour $46-billion worth of energy and infrastructure projects in the China-Pakistan Economic Corridor, which would link Gwadar in Pakistan to Kashgar in China.

In Kazakhstan, a new transit railway aims to link the East and West, facilitating the flow of goods along the ancient silk road trade route.

For its maritime silk route, China secured the support of the Maldives – which straddles major international shipping lanes – with both countries promising to “enhance cooperation in other areas, such as marine, economy, and security.”

China is also courting support among ASEAN countries, which are key partners for the success of its maritime silk road initiative.

But a stumbling block here is China’s tensions with neighboring countries over claims in the contested South China Sea. Experts in Indonesia, for example, have warned that China may have a “hidden agenda,” and that the Asian superpower might use the route to expand its military powers.

“China needs ASEAN so they can start with their Maritime Silk Road, which passes through the South China Sea. China needs the rest of the world in their One Belt, One Road plan. They need our support for their Asian Infrastructure Investment Bank. Why will these countries support China if China is grabbing their maritime zones?” Carpio pointed out in 2015.

China is claiming virtually the entire South China Sea, and has been at odds with the Philippines over this issue. Earlier this year, the Philippines won a favorable ruling from an international tribunal over the sea dispute, but China has been adamant about its refusal to recognize the ruling.

The Philippine government under the new Duterte administration, however, has softened its stance toward using the favorable ruling to press its claim. Before his state visit to China, Duterte had said he wanted a “soft landing” when dealing with China over the controversial issue. – Rappler.com