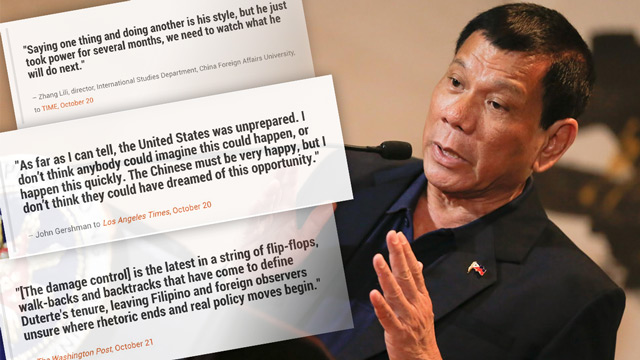 MANILA, Philippines – During his visit to China, President Rodrigo Duterte announced on Thursday, October 20, that he would be “separating” from the United States in economic and military aspects.

“I announce my separation from the United States, both in military, but economics also,” Duterte told Chinese officials and businessmen in Beijing.

His statement sent shockwaves not only in the Philippines and the US, its longtime ally, but also throughout the world.

However, upon his return to the Philippines, the President clarified that he would not exactly “cut ties” with the US.

“It’s not severance of ties. Severance is to cut diplomatic relations. I cannot do that. Why? It’s for the best interests of my country that we maintain that relationship,” Duterte explained. (READ: Palace: Don’t ‘interpret’ Duterte split from US)

Malcolm Cook, a senior fellow at Singapore’s ISEAS-Yusof Ishak Institute, told The Wall Street Journal that Duterte’s shift “complicates China policy for its Southeast Asian neighbors,” especially those that have claims in disputed islands in the West Philippine Sea or South China Sea.

In July, the Philippines won a historic case against China in the Permanent Court of Arbitration over the said maritime dispute.

“Claimants like Vietnam and Malaysia can no longer piggyback on the Philippines’ arbitration win as a vehicle for countering China’s territorial assertions.”

The Washington Post expounded on the Philippines’ plans for closer cooperation with China as Duterte renounced the US.

Following the President’s clarification, the Post wrote that 4 months into Duterte’s term, his plans and platforms “are still in question.”

“Every few days, he makes a comment that could, if pursued, redefine the regional order. The next day, one of his ministers or spokesmen is forced to walk the comment back.”

“[The damage control] is the latest in a string of flip-flops, walk-backs and backtracks that have come to define Duterte’s tenure, leaving Filipino and foreign observers unsure where rhetoric ends and real policy moves begin.”

The paper said that Duterte’s latest pronouncement “is a blow to the Obama administration’s much-heralded ‘pivot’ to Asia.”

John Gershman, a professor at New York University’s Wagner School of Public Service, told the Los Angeles Times that President Duterte’s statements “came as a surprise to the Chinese and the Americans.”

“As far as I can tell, the United States was unprepared. I don’t think anybody could imagine this could happen, or happen this quickly. The Chinese must be very happy, but I don’t think they could have dreamed of this opportunity.”

Gershman added that Duterte “doesn’t like Western finger-wagging over human rights and he is not going to get that from China.”

Duterte had earlier criticized US President Barack Obama for planning to question his strategy to eliminate illegal drugs in the Philippines.

TIME marked the “stunning about-face for the Philippines” in terms of Duterte’s approach in dealing with China on the West Philippine Sea ruling.

TIME also said that China “will be wary of Duterte’s notoriously mercurial nature,” citing his shifts in public statements on his state visit. “The former Davao mayor has gone from saying that the South China Sea would not be discussed, to that it would be brought up ‘in passing,’ to Thursday’s landmark agreement.”

“Saying one thing and doing another is his style, but he just took power for several months, we need to watch what he will do next.”

TIME also wrote that Duterte’s move is “certainly risky” as he will face “strong resistance within his own government and military.”

But it is the Filipino people “who may be even harder to assuage,” said TIME, explaining that the country “remains the world’s most pro-American nation and staunchly anti-Chinese, blaming the Asian superpower for aggressively targeting Philippine fishing stocks.”

“The rhetoric is inexplicably at odds with the warm relationship that exists between the Filipino and American people, and the important cooperation that’s existed between the US and the Philippines at a government and military level for decades.

We haven’t heard any specifics from the Filipino government about what precisely President Duterte means when he refers to a separation, but those comments are creating unnecessary uncertainty in our relationship.”

Earnest then said the US will continue to honor its commitments and obligations to the Philippines. (READ: By ‘separation’ from US, Duterte meant ‘rebalance’ to Asia – Pernia)

The Associated Press reported that the US State Department would be “seeking an explanation” of the President’s comments. “It’s not clear to us exactly what that means and all its ramifications,” said spokesman John Kirby.

Daniel Russel, the US State Department’s Assistant Secretary for East Asian and Pacific Affairs, is visiting Manila from October 22 to 25 to “have a discussion about the scope of the relationship between the United States and the Philippines.” – Rappler.com