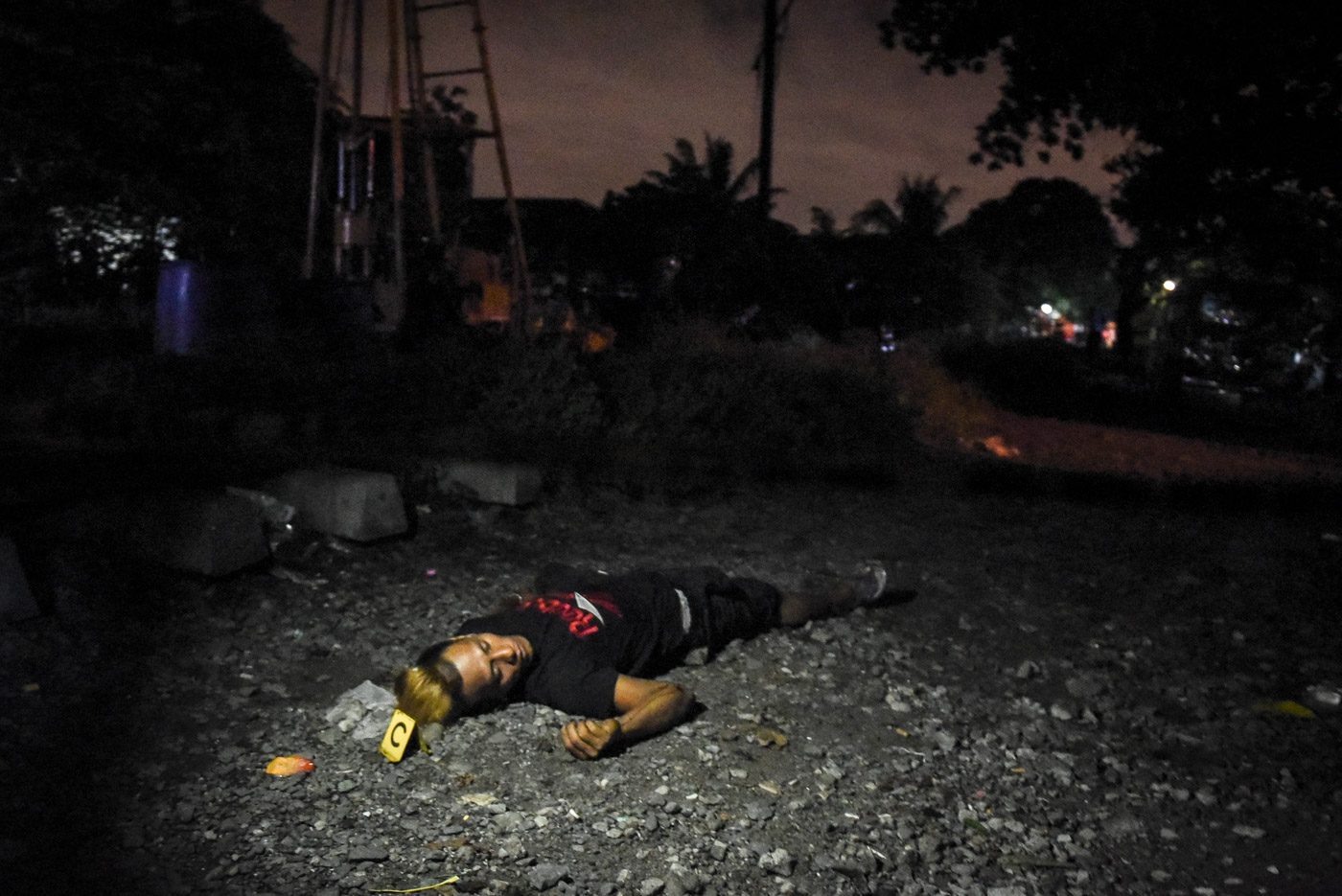 Two international human rights groups recently released findings that the police are behind the spate of extrajudicial drug-related killings in the Philippines.

They bring us back to the time in 2016 when President Rodrigo Duterte scoffed at the warning aired by International Criminal Court (ICC) chief prosecutor Fetou Bensouda that the ICC would be closely monitoring incitements for mass murder. As of end-January 2017, the fatalities have reached more than 7,000 (and still counting) in the country.

ICC Prosecutor Bensouda warned: “Let me be clear: any person in the Philippines who incites or engages in acts of mass violence including by ordering, requesting, encouraging or contributing, in any other manner, to the commission of crimes within the jurisdiction of the ICC is potentially liable to prosecution before the Court.” (READ: Things to know about Duterte’s pet peeve ICC)

What Duterte fails to appreciate is that at this day and age the doctrine of command responsibility has been institutionalized and operationalized both in the international and domestic criminal law regimes. He can be investigated, prosecuted, arrested, and tried for crimes against humanity. And the doctrine of command responsibility will indispensably figure prominently in those proceedings.

Contrary to his pronouncements, Duterte as head of state lacks the mantle of immunity from prosecution either by Philippine authorities (arguably) or the ICC for gravest breaches of international human rights law. (READ: Duterte threatens PH withdrawal from ICC)

Two criminal law frameworks apply to the ongoing mass murders in the Philippines: one domestic, another international.

RA 9851 characterizes as “other crimes against humanity” the unabated mass murders “when committed as part of a widespread or systematic attack directed against any civilian population, with knowledge of the attack.”

As commander-in-chief, President Duterte can be held liable under Section 10 (Responsibility of Superiors) of RA 9851. It provides that “a superior shall be criminally responsible as a principal for such crimes committed by subordinates under his/her effective command and control, or effective authority and control as the case may be, as a result of his/her failure to properly exercise control over such subordinates, where:

(a) That superior either knew or, owing to the circumstances at the time, should have known that the subordinates were committing or about to commit such crimes;

(b) That superior failed to take all necessary and reasonable measures within his/her power to prevent or repress their commission or to submit the matter to the competent authorities for investigation and prosecution.”

According to the Philippine Supreme Court in the Boac v. Cadapan en banc decision dated May 31, 2011, RA 9851 enunciated “command responsibility as a form of criminal complicity in crimes against international humanitarian law, genocide and other crimes.”

In this case, the Supreme Court underscored, “It bears stressing that command responsibility is properly a form of criminal complicity, and thus a substantive rule that points to criminal or administrative liability.”

The law imposes the penalty of reclusion perpetua (technically maximum imprisonment of 40 years) and P500,000 to P1 million fine upon those found guilty of the crime of other crimes against humanity of willful killing, considering “the extreme gravity of the crime, especially where the commission of any of the crimes…results in death…and considering the individual circumstances of the accused.”

Rome Statute of the ICC

No one has criticized President Duterte’s supposed avowal to fight narco-traffickers per se.

The apparent method, however, is inherently reprehensible, “shocking to humanity’s conscience,” and offends our collective and most fundamental sense of decency and humanity. These characterize the very crimes codified in the Rome Statute of the International Criminal Court, namely, war crimes, genocide, crimes against humanity, and crime of aggression.

We effectively domesticated this international treaty by enacting RA 9851 ahead of our country’s ratification of the Rome Statute of the ICC.

At the international level, the continuing mass murders constitute a crime against humanity of murder under the Rome Statute of the International Criminal Court.

Adopted by the Rome Conference on July 7, 1998, the Rome Statute of the International Criminal Court established the ICC as the world’s first permanent criminal court. It entered into force on July 1, 2002, or 60 days after its ratification by the 60th state party. Ten states simultaneously deposited their instruments of ratification with the United Nations Secretary General, who acts as treaty depositary, raising to 66 the total number of state parties, triggering the Rome Statute to enter into force.

We are subject to the ICC’s jurisdiction. We were, in fact, one of the pioneers behind the creation of this first-ever global criminal court, being a state party to the Final Act of The United Nations Diplomatic Conference of Plenipotentiaries on The Establishment of An International Criminal Court held in Rome on July 17, 1998.

Our country – represented by then Deputy Permanent Representative to the United Nations in New York Enrique Manalo – signed the Rome Statute of the ICC on December 28, 2000. The Philippines ratified the Rome Statute on August 30, 2011. We thus became the 117th state party to this treaty,  the second ASEAN country to do so.

In March 2011, ICC President Judge Sang Hyun Song visited the country. Then President Benigno Aquino III signed the Instrument of Ratification on May 6, 2011. Casting their vote, members of the Philippine Senate concurred with then President Aquino on August 23, 2011, in ratifying the Rome Statute.

The Permanent Mission of the Philippines to the United Nations deposited our Instrument of Ratification with the UN Secretary General on August 30, 2011.  By virtue of Article 126 (Entry into force), the Rome Statute’s date of effectivity in the Philippines starts on November 1, 2011.

Then Philippine Permanent Representative Ambassador Libran Cabactulan articulated the significance of the Philippine ratification of the statute, stating: “The Philippines, a democracy that champions international law and the rule of law, views being party to the Rome Statute of the ICC as a vital part of the ongoing global campaign to end impunity and violence against individuals and to further strengthen a rules-based international system, specifically in relation to international human rights law and humanitarian law.”

Cabactulan added: “It is a clear signal of the importance the Philippines [attaches] to this treaty…. The ICC also serves as a deterrent against genocide and other heinous crimes and ensures that all perpetrators of these serious crimes of concern are held accountable.”

Historically, civil society organizations in the Philippines had also lobbied for its ratification.

ICC’s jurisdiction over the Philippines

The statute became effective and applicable to the Philippines 60 days after the deposit of our Instrument of Ratification, or on November 1, 2011, as provided for under Article 126.  The crime against humanity of murder allegedly perpetrated by state actors therefore falls under the jurisdiction and is cognizable by the International Criminal Court, inasmuch as the continuing mass murders occurred after November 1, 2011.

This principle of jurisdiction, however, interplays with the principle of complementarity. It means national jurisdictions, just like the Philippines, have primacy over the ICC, as far as investigating, prosecuting and trying cases – like the crime against humanity of murder under the Rome Statute of the ICC – are concerned. Hence, in the context of the open-season murder of drug suspects, the Philippines, and not the ICC, is the one that theoretically has primacy to carry out investigations, prosecutions, and trial.

But such state-initiated investigations, prosecutions, and trials should not be a mere facade, but rather an impartial, honest, and good faith investigation, prosecution, and trial. Otherwise, the ICC can step in, pursuant to the principle of complementarity, if the Philippines is shown to be unwilling or unable to investigate, prosecute, and try in good faith.

We have an adequate legal system to carry out domestically this obligation to prosecute, try, and punish perpetrators under the Rome Statute of the International Criminal Court, given our own RA 9851 – Philippine Act on Crimes Against International Humanitarian Law, Genocide, and Other Crimes Against Humanity.

We have duly-constituted and fully functioning criminal courts and a hierarchy of judicial review.  Section 18 (Philippine Court, Prosecutors and Investigators) of RA 9851 provides regional trial courts with original and exclusive jurisdiction over crimes punishable under RA 9851. Our Supreme Court also has the power to “designate special courts to try” such cases, according to Section 18.

Section 18 further provides that “the Commission on Human Rights, the Department of Justice, the Philippine National Police or other concerned law enforcement agencies shall designate prosecutors or investigators.”

Will our own executive department be willing and sincere in carrying out an honest, thorough, and good faith investigation, prosecution, and trial of the killers, particularly the mastermind, the planner, and the direct perpetrator?

It seems that only the Commission on Human Rights can carry out an impartial and independent investigation into the mass murders.

It’s this factual element that can potentially bring about in the future an active and direct ICC involvement in investigating the spate of mass atrocities in the country. An ICC prosecutor can conduct a preliminary examination to see if adequate information exists to warrant the opening of an investigation into crimes within the ICC’s jurisdiction.

ICC prosecutor Fatou Bensouda can initiate such a preliminary investigation motu proprio or on her own accord “on the basis of information on crimes within the jurisdiction of the Court,” per Article 15(1) of the Rome Statute, as she herself has warned.

The ICC merely serves to complement the Philippines’ primary jurisdiction over the gravest crimes punishable under the Rome Statute – the crime against humanity of murder in the case of the Philippines. The ICC, however, will likely step in, if Philippine authorities fail to act on the killings, as crimes against humanity undermine the rule of international human rights law.

Failure or refusal on the part of the ICC to act will constitute a betrayal of its mandate to dismantle the wall of impunity by holding notorious human rights violators accountable before the bar of international justice. – Rappler.com

The author serves as the Associate Director of Graduate Programs of Indiana University Robert H. McKinney School of Law (stated only for purposes of showing affiliation). He holds a Master of Laws degree in Human Rights (University of Hong Kong; Honors) and a Master of Laws in American Law for Foreign Lawyers (Indiana University Robert H. McKinney School of Law). He worked as a journalist of Ang Pahayagang Malaya, The Manila Times, The Philippine Post, Pinoy Gazette, UCANews and ISYU Newsmagazine. He is a lifetime member of the Integrated Bar of the Philippines. The views expressed here exclusively belong to the author.