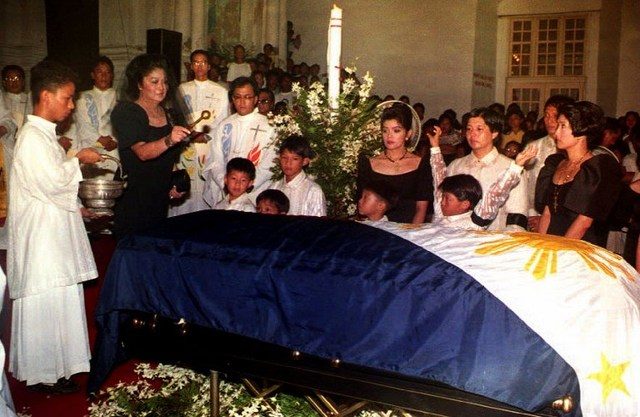 MANILA, Philippines (3rd UPDATE) – The long-running issue of whether or not former president Ferdinand Marcos should be buried at the Libingan ng mga Bayani (Heroes’ Cemetery) has finally been put to rest.

Marcos was stealthily buried at the Heroes’ Cemetery past noon with full military honors.

Just 10 days earlier, the Supreme Court on November 8, decided that the late dictator can be buried at the Libingan – nearly 3 months after President Rodrigo Duterte gave his marching orders for burial preparations. Martial Law victims had filed petitions to block it. (READ: Martial Law 101: Things you should know)

The 21-year administration of Marcos is notorious for its many human rights abuses. Amnesty International recorded about 70,000 people imprisoned, 34,000 tortured, and 3,240 were killed from 1972 to 1981 – the years when the Philippines was placed under Martial Law. (READ: Worse than death: Torture methods during martial law)

In the past 27 years, the final resting place of Marcos had been highly debated but on November 18, it was silenced. (READ: From Hawaii to Ilocos Norte: The long journey of Ferdinand Marcos’ remains)

The Marcos administration was toppled through the People Power Revolution. Marcos, his family, and several of his allies were flown to Hawaii, United States.

Three years into exile, Marcos passed away at the age of 72 on September 28, 1989 due to complications brought by kidney, lung, and heart ailments.

Aquino, however, did not allow Marcos’ body to be returned to the Philippines “in the interest of the safety of those who will take the death of Marcos in widely and passionately conflicting ways.” The US Federal Aviation Administration also issued an order preventing the operation of any aircraft carrying Marcos’ body from the US to the Philippines.

Unable to return to the Philippines due to the government ban, Marcos’ body was interred on October 15, 1989 in a private mausoleum at the Valley of the Temples Memorial Park in Hawaii.

The funeral Mass for Marcos in the state’s largest Roman Catholic church was attended by “more than 1,500 people.”

Imelda Marcos and her family returned from exile to the Philippines but without the body of the family patriarch.

Marcos’ body was flown via a chartered Continental Airlines jet direct to his home province, Ilocos Norte, on September 7, 1993 as part of the deal signed by the Philippine government headed by then newly-elected President Fidel V. Ramos and the Marcos family.

After a festive gathering that was attended by thousands of supporters, the former dictator’s body was interred in a glass crypt in the Marcos Museum and Mausoleum in Batac City.

Then President Joseph Estrada abandoned his plan of finally burying Marcos at the Libingan ng mga Bayani, supposedly scheduled on July 11, 1998, after it was met with “various emotions and sentiments that flared up.”

Jejomar Binay, then vice president, recommended to then president Benigno Aquino III to let Marcos be buried in Batac City with full military honors. In 2016, Binay said that Aquino did not act on it. (READ: Aquino sat on Binay proposal to bury Marcos in Ilocos)

After consistently declaring that the late dictator deserves to be buried at the Libingan ng mga Bayani, President Rodrigo Duterte on August 7, 2016 gave the orders to go on with the process on the grounds that he was a “former president and a soldier.”

Duterte’s plan was opposed by several stakeholders, especially by the victims of abuse during the Martial Law period.

He, however, argued that his decision was consistent with upholding the law, stating that the Aquinos and their supporters should have passed a law banning a hero’s burial for Marcos.

A total of 6 petitions to strike down the order were filed at the Supreme Court. It held oral arguments on August 31 and September 8.

On August 23, just before the first day of the oral arguments, the SC issued a status quo ante order (SQAO) on the interment of the former president. It was the first of 3 SQAOs released that effectively extended the postponent to November 8.

After several extensions, the Supreme Court ruled 9-5, with one abstention, on Tuesday, November 8, that Marcos’ body can be buried at the Libingan ng mga Bayani. (READ: Supreme Court allows hero’s burial for Marcos)

The High Court’s decision cleared all legal obstacles to a Marcos burial.

Albay 1st District Representative Edcel Lagman filed a manifestation before the SC on behalf of all petitioners. They said they have yet to receive full copies of the decision and opinions, thus preventing them from challenging the ruling in court. Lagman asked that SC justices consider reissuing another status quo ante order on Marcos’ burial until they are able to submit their motion.

Lagman also asked the High Court to advise the Armed Forces of the Philippines or the defense department to hold implementation of President Duterte’s order to begin preparations for the Marcos burial until the SC ruling becomes final.

Marcos’ body was interred at the Libingan ng mga Bayani after being flown from Ilocos Norte. The exact date of the burial was never publicly confirmed prior to Friday, November 18.

According to reports, media who were at the Heroes’ Cemetery thought that there would be a rehearsal only until Philippine National Police chief Director General Ronald dela Rosa arrived. He confirmed the burial and said that the Marcos family requested “simple and private” funeral rites.

As of early afternoon protests are being organized by groups against a hero’s burial for Marcos. – Rappler.com