The House’s ‘climax’ congressmen: Who are they? 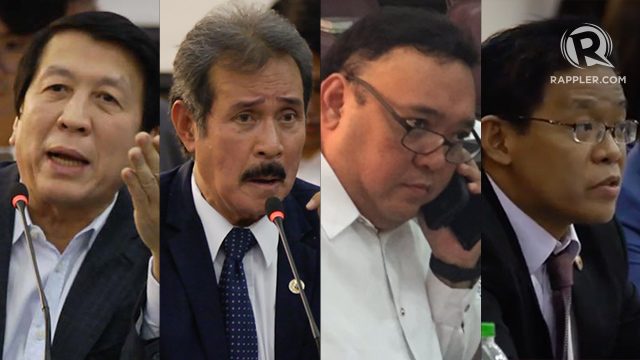 Facebook Twitter Copy URL
Copied
Long-time politicians, a former law school dean, and a neophyte legislator who advocates for the rights of the marginalized ask De Lima's former aide Ronnie Dayan questions the hearing could have done without

MANILA, Philippines – Lawmakers in the House of Representatives crossed the line on Thursday, November 24, as they pounded Ronnie Dayan with questions about his intimate relationship with his former employer Senator Leila de Lima.

The former aide and ex-lover of De Lima faced the House committee on justice two days after he was arrested in La Union. He has been accused of being De Lima’s bagman in the illegal drug trade.

Netizens were quick to criticize legislators who asked Dayan |irrelevant questions that sought to bring out juicy details about their relationship, but which had nothing to do with the issue they were supposedly investigating. (READ: Netizens on Dayan, De Lima questions: ‘Papa Jack’, ‘crossing the line’)

But it was still possible to investigate De Lima’s alleged involvement in the drug trade without having to ask Dayan to divulge private and intimate details about their relationship. Several lawmakers were able to do so.

Who are these legislators who asked questions the hearing could have done without?

During the hearing, House Majority Leader Rodolfo Fariñas asked Dayan the typhoon signal that approximates his relationship with De Lima.

Fariñas graduated from the Ateneo Law School in 1978 after 7 years. In a Newsbreak piece first published in 2011, his prolonged stay at the Ateneo was because of then law dean Fr Joaquin Bernas, who allegedly thought the scion of a rich Ilocano family was “making a mockery” of the school’s standards.

Fariñas’ first foray into politics was in 1980 when he became the youngest mayor in the history of Laoag City. In 1986, he became governor and held the spot for 10 years before finally joining the House of Representatives in 1998.

His life, however, was not without issue.

Fariñas was allegedly an abusive husband when his wife, former beauty queen Maria Theresa Carlson, was still alive. According to a 2001 Newsbreak piece, abuse allegedly started as early as the late 1980s.

The Ilocano politician vehemently denied these allegations and claimed all were spread by detractors wanting to destroy his reputation.

In 1996, however, Carlson accused her husband of domestic abuse during an interview with the Probe Team. But a week later, she took back everything she said when she appeared in Magandang Gabi Bayan with Fariñas.

In 2001, Carlson leaped to her death from the 23rd floor of a condominium in Greenhills, San Juan City. A Philippine Star report said she and her maid went to Malacañang hours before her death to give then president Gloria Macapagal Arroyo a video tape allegedly showing Fariñas hurting one of their children.

Her death inspired Task Force Maria which supported the passage of Republic Act 9262 or the Anti-Violence against Women and their Children Act in 2004.

A long-time voice of Capiz in the House, Castro has served for at least 13 years in Congress. He was first elected legislator in 2001 and served for 3 terms until 2010.

Castro once again gained a seat in the House in 2013 and was elected again in the 2016 elections.

The 65-year-old is a lawyer by profession. A graduate from San Beda College, Castro was admitted to the Philippine Bar in 1976.

Among the bills he authored is the reimposition of the death penalty, lowering the minimum age of criminal responsibility, and the anti-dynasty bill.

His line of questioning, however, appears to depart from his party-list group’s goal of “meaningful changes in our educational system.”

Before 1-Ang Edukasyon, Belaro was a nominee for Oragaon, a sectoral group for Bicolanos, in 2010. The party-list group failed to get enough votes to secure a seat that year.

Just like De Lima, Belaro is a lawyer who hails from Camarines Sur. He was previously a Commissioner of Bar Discipline of the Integrated Bar of the Philippines (IBP) and headed the St Dominic Savio College of Law.

Lawyer Harry Roque represents Kabalikat ng Mamamayan (KABAYAN) in the House. His party list hopes to contribute to the “full realization of the economic, social and cultural rights of all Filipinos, particularly the marginalized.”

Prior to entering Congress, Roque handled high-profile cases with the Center for International Law (CenterLaw) – cases of families of the Maguindanao Massacre victims, of slain journalist and environmental activist Gerry Ortega, of slain transgender Jennifer Laude, among others.

Roque was also the lawyer of at least 70 members of the Malaya Lolas group composed of victims of rape and sexual slavery during the Japanese Occupation.

But during the hearing on Thursday, November 24, Roque’s line of questioning focused on De Lima’s alleged “frailties of a woman.”