FAST FACTS: The JASIG in the peace talks 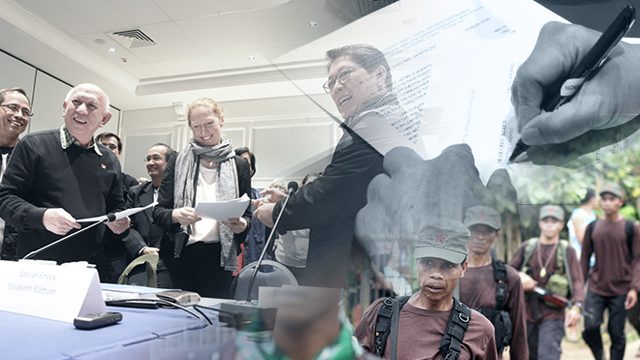 Facebook Twitter Copy URL
Copied
What is the Joint Agreement on Safety and Immunity Guarantees (JASIG) all about in relation to the failed peace negotiations?

MANILA, Philippines – The administration of President Rodrigo Duterte was poised to be the “friendliest” with the Communist Party of the Philippines (CPP) given the positive developments in the peace talks.

However, on Saturday, February 4, Duterte announced the termination of negotiations after he cancelled the ceasefire with the CPP’s armed wing, the New People’s Army (NPA).

The self-proclaimed “leftist” president tagged the people behind Asia’s longest-running insurgency as “spoiled brats” and the NPAs as “terrorists.” (READ: Duterte: Communist rebels are terrorists)

The obliteration of what was supposed to be a flourishing relationship reached a new low on Tuesday, February 7, when the Duterte administration terminated the Joint Agreement on Safety and Immunity Guarantees (JASIG).

What is the JASIG anyway? How important is it in the big picture of the peace talks? Here are some highlights:

JASIG is an agreement signed by the Philippine government and the National Democratic Front of the Philippines (NDF) in 1995. (FAST FACTS: The CPP-NPA-NDF and the Oslo talks)

It essentially guarantees the immunity and safety of individuals involved in the peace talks.

They are subject to “free and unhindered passage” across the Philippines and also outside the country in relation to their responsibilities in the negotiations. In addition, they are also immune from “surveillance, harassment, search, arrest, detention, prosecution and interrogation or any other similar punitive actions.”

Guaranteeing immunity and safety not only prevents untoward incidents that may jeopardize the negotiations, but also protects negotiators and consultants, among others, from any threat that may affect the way they carry out their responsibilities.

The JASIG likewise allows parties involved to freely go to their constituents on the ground to consult and discuss the terms of the peace talks.

Before anyone can invoke the joint agreement, they need to be identified and duly accredited by their own party first.

Among those who can be covered by the joint agreement are negotiators, consultants, and members of staff and security of each party. They are given identification documents or the safe conduct passes.

Aside from an identifying number, safe conduct passes also bear the official seal of the issuing party and include these details: name, sex, photo, birthday and birthplace, height, hair and eyes color, distinguishing physical features, designation or duty in the negotiations, and period of validity.

In 2014, however, CPP top leaders Benito and William Tiamzon were arrested even when they were supposedly protected by the JASIG at the time. The Left claimed their arrest was a violation of the joint agreement because after talks hit a snag in 2013, no “special notice of termination” that would have served to lift the joint agreement was issued.

Following this, members of leftist organizations said the JASIG has turned into a “bounty list” for the government.

Then government chief negotiator in 2012, Alex Padilla, said the Tiamzons were not granted immunity because the verification process in that year failed. (READ: CPP chief, wife not covered by ‘immunity’)

During the peace talks held in the Netherlands in 2012, the file containing the names of “underground” individuals protected by the JASIG was corrupted. This file supposedly included the Tiamzons.

Only one list that included 34 members of the NDFP negotiating panel was verified and eventually covered by the joint agreement.

At least 20 consultants were temporarily released in August 2016 as part of the formal resumption of the peace talks – an effort of the administration to end the conflict that has claimed thousands of lives. (READ: WHO’S WHO: Political prisoners released for Oslo peace talks)

Prior to the resumption of the peace talks, the NDF has constantly called out the imprisonment of its consultants over alleged trumped-up charges. The arrested consultants, they claimed, were protected by the joint agreement.

As the freedom granted by the courts to some freed consultants was expiring, the Philippine government, in a joint statement after the 3rd round of talks, said that it has committed to “file immediately the necessary manifestations in support” of extending the temporary liberty for the duration of the peace negotiations.

However, things now look very different as Duterte – after he declared the cancellation of the peace talks – also said he now wants to put back behind bars NDF consultants who were released.

NDF legal consultant Edre Olalia said a legal process has to be followed before they can be put back in jail. This process involves the issuance of court orders. (READ: NDF: No basis to arrest released communist rebels)

“Only the courts which granted them temporary liberty by virtue of cash bails can act or order whether or not they can be validly rearrested, if at all, and not by the unilateral action of the police nor the military, much less even by the mere instructions of the GRP President,” he said on Monday, February 6.

It will also take 30 days for the termination of peace talks to take effect. Will the 3 rounds of negotiations both parties engaged in the past 6 months amount to nothing? – Rappler.com