TIMELINE: The PNP’s use of the term ‘deaths under investigation’ 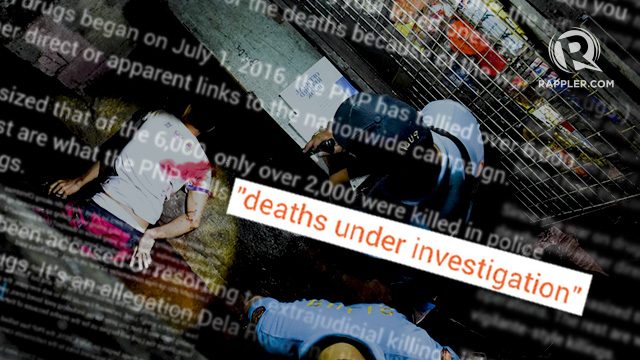 Facebook Twitter Copy URL
Copied
(UPDATED) We track how the PNP has released data on DUIs, and try to explain all the confusion it has generated

MANILA, Philippines (UPDATED) – The “war on drugs” under the administration of President Rodrigo Duterte has turned out to be – to borrow his words – bloody.

As of January 2017, over 2,500 suspected drug personalities have been killed in police operations alone.

One issue that has generated a lot of debate in the death count related to the war on drugs is how to interpret the numbers that the Philippine National Police (PNP) has tagged as “deaths under investigation” (DUI).

The police had never used the term “deaths under investigation” until after the Duterte administration assumed office. Reporters who have been covering the beat for a long time will also confirm that this had never been used in police statements and releases. Even Google search results yield negative results on the use of this term by authorities before August 2016.

Reporters covering the police beat started reporting more frequently in the first few months of the anti-illegal drug campaign about people found dead in the streets, some appearing to have been killed vigilante-style. Some of the early corpses were shown bound in packing tape with cardboard signs labelling them as drug pushers.

The highlights of this timeline reveal the following:

The Philippine Daily Inquirer published its “Kill List,” which tracks killings related to the anti-drug war monitored by its reporters. The list includes vigilante-style killings and individuals killed as a result of police operations.

ABS-CBN published its MAP, CHARTS: The Death Toll of the War on Drugs.

Senator Leila de Lima, who then chaired the Senate committee on justice, delivered a privilege speech about the killings which triggered a Senate investigation on the issue.

Dela Rosa used the term “deaths under investigation” (DUI) for the first time in a hearing by the Senate committee on public order regarding possible revisions to laws that would help anti-illegal drug efforts.

The PNP chief said there were 899 deaths falling under this category from July 1 to August 15. Among these, 22 cases were filed in court. These DUIs, added Dela Rosa, took place outside legitimate police operations.

In a press briefing after the hearing, Dela Rosa further described the term DUI.

In a Senate hearing on reported EJKs, Dela Rosa said not all DUIs are drug-related. He also said motives in at least 757 deaths at the time had yet to be determined. Rappler published its “In Numbers” story, tracking the number of deaths or victims linked to the “war on drugs”, based on data sent by the PNP to reporters.

There was no breakdown for the motives of these DUIs, whether drug-related or not, because these were not reflected in the data given to reporters. This continued until the suspension of Project Double Barrel in January 2017.

In the PNP PIO’s DUI data update, it added this note: “DUIs are not automatically extrajudicial killings nor vigilante/summary killings. DUIs are murder and/or homicide [cases] that are still under investigation.”

The PNP sent a letter to Rappler, saying that cases of DUIs “cannot all be attributed to the ‘war on drugs’, unless it is determined as such through proper investigation.”

Police Superintendent Henry Libay, head secretariat of PNP’s Task Force Usig explained, “Out of 1,866 deaths under investigation, only 685 are drug-related.” Libay mentioned other motives like personal grudge and robbery or theft, but did not provide a breakdown.

The PNP replied to a Rappler researcher, denying a request for specific details of those killed during legitimate and outside police operations “because it may compromise our ongoing investigations, operations and other related activities in relation to Project Double Barrel.”

The administration launched its eFOI portal. A number of individuals filed requests for progress on “deaths under investigation.”

PNP chief Dela Rosa told reporters that only a third of over 3,000 DUI cases at that point were drug-related. The rest “are normal cases of murder, homicide, [those killed by riding-in-tandem suspects], parricide.”

(For example, it was validated that you were not really involved in drugs, but you died, so that’s death under investigation because your killer or assailant was unknown. It appeared now that your death wasn’t drug-related.)

He likewise claimed some of the deaths were caused by guns-for-hire taking advantage of the anti-illegal drug campaign.

In a document showing a recapitulation (summary) of the DUI figures, the PNP defined DUI as “murder cases outside police operations, regardless of the motive which [has] yet to be cleared or solved.”

The PNP PIO gave the last update on DUI to police beat reporters.

It showed that there were 3,603 victims in 3,271 cases or incidents of DUIs. There were also 922 victims in 875 cases with investigation concluded and filed in court. There is no breakdown as to how many victims died in drug-related and non-drug-related incidents. Below is a graph of DUI figures received from the PNP PIO from September 2016 to January 2017.

After the suspension of Project Double Barrel Alpha on January 30, the PNP did not release a document showing breakdowns for DUI and IC [investigation concluded] figures, at least in terms of motives, to PNP beat reporters.

They only mentioned these breakdowns in press briefings and statements.

The PNP reacted via a statement to an Amnesty International report, which detailed stories of alleged police corruption and abuse in the war on drugs:

“… [O]f the 4,744 murders under investigation that both local and foreign observers wrongfully refer to as ‘extrajudicial killing’, 3,459 were determined to be non-drug related incidents, 662 of which were motivated by personal grudge, 15 were related to property dispute, 16 were crimes of passion, 10 were ‘rido’ or family feud, 11 were work-related, and 2 were atrocities committed by threat groups.”

Notice, however, that the breakdown of non-drug-related incidents only add up to 716, leaving 2,743 deaths unaccounted for.

“On the other hand, only 1,285 incidents had something to do with the victim’s association with drug activities,” the PNP’s statement said.

PNP spokesperson Senior Supt. Dionardo Carlos disputed Vice President Robredo’s use of the 7,080 figure. He said, out of over 4,000 DUIs, only 682 cases were found to be drug-related. The rest “are regular crimes happening on the street.”

Curiously, the number of drug-related cases appears to have “decreased”, from 1,285 in its statement in response to the Amnesty International report.

A document obtained upon request by Rappler shows an updated summary of the figures.

In the summary, the PNP once again changed the way they described the deaths. The document now refers to DUIs as “homicide cases under investigation” (HCUI) and IC as “filed in court” (FC).

The PNP also said there are 3,560 incidents with “motive to be determined.”

The data appears to have included statistics for Project Double Barrel Reloaded. Note that the PNP released a breakdown only for incidents in terms of drug-related and non-drug-related ones.

Some incidents documented in the previous months resulted in multiple victims.

The breakdown given for victims was not according to motive, but according to whether the cases were “cleared” (suspect was identified and charged in court) or “not cleared.”

On March 23, Rappler requested for a breakdown of the number of victims in DUI/HCUI and IC/FC cases by motive.

In its response on March 27, however, the PNP only released statistics similar to the one shown above, with no breakdown of victims by motive.

The document also does not isolate the numbers recorded between July 1, 2016 and January 31, 2017 – or during the first round of PNP’s anti-illegal drugs campaign – as requested by Rappler. This mixes up categories used in a previous data set with a newer data set released this March, creating even more confusion in the interpretation of the data. – with Michael Bueza, Bea Cupin, Gemma Mendoza and Wayne Manuel/Rappler.com