FAST FACTS: What is the PCOO? 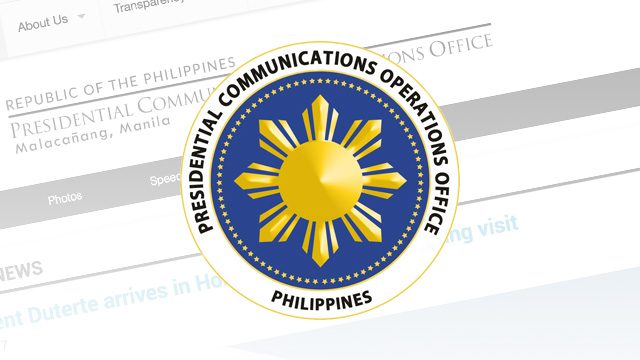 Facebook Twitter Copy URL
Copied
What are the roles and functions of the government agency that dancer-turned-blogger Mocha Uson will soon be a part of?

Uson, a staunch defender of the President, will be assistant secretary for social media, a new post created for her in the office responsible for disseminating information about the government’s messages and programs. (FAST FACTS: Who is Mocha Uson?)

While past Philippine presidents have long had officials in charge of presidential messaging, the current office was created in September 1986 through Memorandum Order No. 32, signed by former president Corazon Aquino.

Her successors reorganized the Office of the Press Secretary (OPS) and modified the information agencies under the executive branch from time to time, with former president Fidel V. Ramos restructuring the OPS in January 1996, and former president Joseph Estrada abolishing the position of presidential spokesperson. Under former president Gloria Macapagal-Arroyo, this position was restored.

In 2010, former president Benigno Aquino III signed Executive Order No. 4. It reorganized the OPS into the PCOO – in charge of dissemination of the government’s messages – and the Presidential Communications Development and Strategic Planning Office (PCDSPO), in charge of the messaging.

Under the new Duterte administration, the PCDSPO was folded into the PCOO. It is currently headed by Secretary Martin Andanar, a former newsreader.

The PCOO’s related agencies include the Philippine Information Agency, News and Information Bureau, People’s Television Network Inc, Bureau of Broadcast Services, and the National Printing Office, among others.

According to Executive Order No. 4 issued in 2010, the PCOO’s functions include the following:

With the advent of technology, the PCOO also functions as the social media arm of the government for its digital visibility, managing the Facebook page of the President and other social media websites.

As the newly appointed assistant secretary for social media, Uson said she would focus on using the power of social media to reach Filipinos abroad.

But while Uson’s supporters lauded the President’s move to appoint her, others have questioned the move, pointing out that Uson has been accused of spreading fake news and propaganda in her own social media account. (READ: Photo used by Duterte camp to hit critics taken in Brazil, not PH)

Some have also questioned why a sexy dancer and celebrity blogger was tapped for the role.

But Duterte has dismissed the criticism, saying Uson is “bright and articulate,” also adding that her history as a dancer does not make her incompetent for her role in the PCOO.

He also said that his decision was payment of a “debt of gratitude” for Uson’s support for his presidential run. – Timothy Gucilatar and Bianca Ishbelle Bongato/Rappler.com