If you’re arrested or detained, know these rights

May 26, 2017 9:34 AM PHT
Michael Bueza
Facebook Twitter Copy URL
Copied
The Constitution remains in effect even in times of emergency, such as during martial law. This means that rights during arrest or detention remain in place. 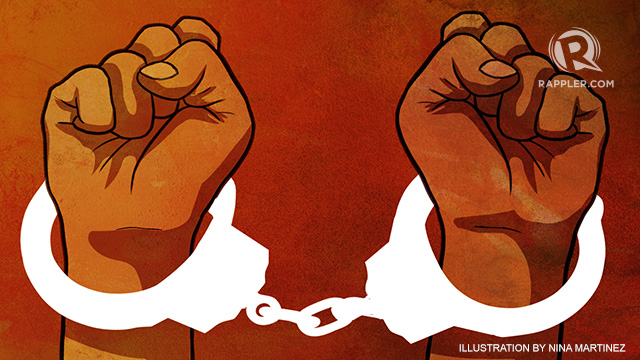 MANILA, Philippines – The 1987 Constitution guarantees that no Filipino shall be deprived of life, liberty, or property without due process of law.

As long as a citizen abides by the law, he or she should not be in trouble.

But what if you’re apprehended by authorities for some reason – or in times of emergency, like the recent declaration of martial law in Mindanao – you’re picked up due to supposed security concerns?

Article III, Section 12 of the 1987 Constitution (also known as the Bill of Rights) states that any person under investigation for the commission of a crime or offense “shall have the right to be informed of his right to remain silent and to have competent and independent counsel preferably of his own choice.”

If you can’t afford a lawyer, the state will provide you with one.

The right to remain silent is emphasized because any statement you give can be used against you in court.

Likewise, it is your right to call or have access to a lawyer at all times throughout the ordeal of arrest or detention.

These rights cannot be waived “except in writing and in the presence of counsel,” says the Constitution.

If you’re being arrested you should know these additional rights:

A manual on law enforcement for citizens prepared by the Philippine National Police, in fact, says that prior to release or any change of custody, “you will…be physically examined.”

Lawyer Marlon Manuel of the Alternative Law Groups, a coalition of legal resource non-governmental organizations, said that physical examination is already part of the police’s booking procedures immediately after an arrest.

The Free Legal Assistance Group (FLAG), in its primer on human rights, also recommends that you stay calm, not resist arrest or offer any physical resistance, and ask a relative, friend or even anybody to witness the arrest. Make sure to get the witness’ name and address.

FLAG also suggests you ask the arresting officer where you will be brought, and be accompanied by the witness of your arrest. Do not agree to be blindfolded.

If authorities invite you for questioning, say you will first consult your lawyer, who will arrange a date, time, and place for your questioning. If they insist on taking you with them, their acts become tantamount to an arrest.

“In short, if the invitation [for questioning] is not really an invitation but more of a deprivation of liberty, it becomes equivalent to custodial investigation,” he added.

Authorities may conduct a warrantless arrest, but only on the following grounds:

If you’re arrested without a warrant, you can only be detained for:

As a general rule, inquest proceedings – where a civilian prosecutor determines the legality of an arrest – are included in these time periods.

If you are arrested or detained, you are entitled to the following rights, according to FLAG:

According to Republic Act 7438, a person arrested, detained or under custodial investigation shall be allowed visits by:

RA 7438 defines a person’s immediate family as “his or her spouse, fiancé or fiancée, parent or child, brother or sister, grandparent or grandchild, uncle or aunt, nephew or niece, and guardian or ward.”

The following acts are illegal, according to the Bill of Rights of the Constitution:

References: 1987 Constitution, International Covenant on Civil and Political Rights, Republic Act 7438, Republic Act 9745, a 2001 advisory of the Commission on Human Rights, “Know Your Rights” primer by the Free Legal Assistance Group (FLAG), “Know Your Rights: A Citizen Primer on Law Enforcement” by the Philippine National Police and Hanns Sidel Foundation