What were Duterte’s favorite words in his speeches? 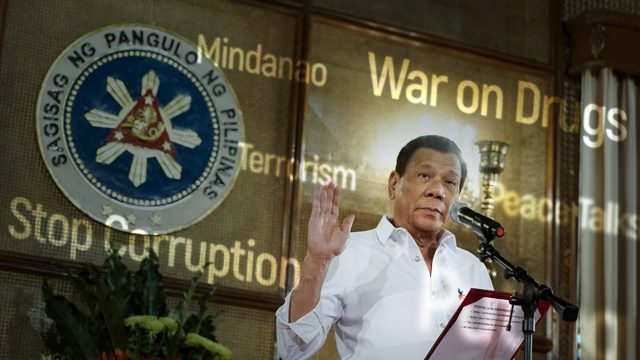 MANILA, Philippines – “I have a prepared speech here, two pages. But this kind of thing would not inspire me tonight if I do not give you my sentimyento ko sa buhay (sentiments in life).”

Such goes most of the speeches of President Rodrigo Duterte. Extemporaneous and off the cuff, many of his speeches run for nearly half an hour – some clocking over an hour – with a dash of expletives when he feels strongly about a topic.

He can also tend to ramble on various topics, and often repeats his thoughts across multiple speeches.

The President says his office writes his speeches for every event, but he believes a prepared speech “does not show the person. It cannot transmit the emotion which I would like to feel.”

For instance, he inserted ad libs in his first State of the Nation Address (SONA), his 2nd longest speech so far, at over 9,400 words, as of June 26. The President even instructed the teleprompter operator to skip some parts of his SONA.

Nonetheless, as President, Filipinos hang on to his every word, listen to his anecdotes, and cling to his promises and aspirations.

In his first year in office, Duterte has, as of Tuesday, June 27, delivered at least 302 speeches (both prepared and extemporaneous), statements, messages, and remarks. This is equal to an average of 25 speeches per month.

We used the transcripts available at the websites of the Presidential Communications Operations Office (PCOO) and Radio Television Malacañang (RTVM), compared against the list of videos in RTVM’s Youtube account. We also manually transcribed 9 speeches and remarks that did not have transcripts on either the PCOO or RTVM website. (Read the methodology used for this story here.)

The President had the most speaking engagements in December 2016, with 36 speeches and statements. In this month, Duterte flew to Cambodia and Singapore, talked to US President Donald Trump over the phone, and delivered his Christmas and New Year message to Filipinos.

It is followed by October 2016, with 34 speeches. This was when Duterte made official visits to Brunei, China, and Japan. He also talked to the troops at the Philippine Army headquarters and to policemen in two regional police offices in Mindanao.

In third place is August 2016, with 33. Major events in August include his disclosure of names involved in illegal drugs. He likewise went to many military camps and visited the wakes of soldiers killed in action.

Length as of June 26

Based on our count, his speeches have an average length of around 2,880 words. On short bond paper using 12-points, Times New Roman, this would be about 6 or 7 pages, single space.*

The words were counted via the Word Count tool of Microsoft Word, and double-checked at wordcounter.net. We also performed some clean-up on the transcripts, like removing en (–) and em (—) dashes, and taking out words representing audience reactions or visual cues such as “[applause]”, among others.

The longest speech the President has delivered so far is 11,186 words long, at the 35th anniversary of his political party, PDP-Laban, in March 2017.

In 3rd place is his speech at the 9th National Biennial Summit on Women in Community Policing in September 2016 in Davao City, at 9,077 words.

He also speaks at length during his many talks to soldiers and cops at military and police camps, and in meetings with Filipino communities abroad, on the sidelines of his official and state visits.

On the other hand, his shortest statement is his opening remarks at the 12th Brunei Darussalam-Indonesia-Malaysia-Philippines East ASEAN Growth Area (BIMP-EAGA) Summit in April 2017, at only 69 words.

The second shortest is only 86 words long, when he issued a public statement on the terrorist attack in Nice, France, in July 2016. Coming in third is his 98-word toast to members of the diplomatic corps in his first day in office on June 30, 2016.

Many of his shortest speeches are prepared statements and messages, as well as opening statements in bilateral meetings and press conferences.

Here’s a “word cloud” of the top 365 words Duterte has used in his speeches in his first year:

Excluding “stop words” or common English and Filipino words like “I, the, and na“, the word the President said the most was “time”, mentioned 1,860 times.

This word was used in multiple contexts, from anecdotes (“A long time ago…”) to promises (“…it will not happen during my time.”) to invoking the Lord’s name (“In the fullness of God’s time…) to assertions (“It’s time for a cessation of hostilities.”)

Other words in the Top 10 include:

Duterte’s speeches are infamous for a multitude of curses.

In transcripts, his curses are either spelled as is or converted into asterisks (*). They have also been marked as “(expletive)” or “(expletives)” – which happened in a combined 114 instances.

Here’s a summary of some of his favorite curse words in his speeches. The counts include variations in spelling and usage of each curse word:

In his inaugural address, Duterte stressed the urgency of fighting corruption, criminality, and the sale of illegal drugs. This became part of his main agenda during his administration.

In his speeches, he mentioned the word “drugs” 674 times, its singular form “drug” an additional 661 times, and its Filipino translation “droga” 453 times. “Anti-drug(s)” was mentioned 4 times.

Included in the count for “drug” are variations of “drug lord” (with or without a space, and in singular or plural form), which were mentioned a total of 161 times.

He said “shabu” (methamphetamine) and other derivatives of the word 451 times, “cocaine” 35 times, and “marijuana” 16 times.

Duterte also frequently mentioned the number of drug addicts in the country, ranging from 3 million to 4 million. He has cited these figures at least 113 times.

The President did not forget the wrongdoers themselves, saying the word “criminals” 162 times and “kriminal” 79 times. “Criminal”, which can be both a noun and an adjective, was mentioned 227 times.

Various spellings of its Filipino translation are also reflected in the transcripts: “korapsyon” (16 times), “korupsyon” (7) and “korap” (1). Another word for corrupt persons, “kurakot“, was mentioned 7 times.

He also plugged the 8888 hotline in his speeches, mentioning it 40 times. In 6 separate instances, though, he misstated the hotline as “888”.

Duterte also spoke of death to those behind the scourges of society like drugs and criminality.

While Duterte once said, “I hate to kill a human being. I am not just up to it actually. It pains me to see grief in anybody’s heart,” he also argued, “When has it been a crime to say, ‘I will kill all the criminals who will harm our people?’ When was it wrong to say, ‘Do not destroy the next generation of my country, or else, I will kill you.'”

He has used the Filipino verbs “patayin” and “papatayin” 271 times and 151 times, respectively. The root word “patay“, which can be a noun and an adjective, has been used 415 times, again in different contexts.

Duterte has directed the police to hunt down criminals and drug addicts, and vowed to protect them in the performance of their duties. “Do your duty, go out and find for these criminals, arrest them if possible. But if they offer a violent resistance, and you think that your life is in danger, patayin mo (kill them). And that is my order until now.”

Combatting terrorism (mentioned 180 times in speeches) was also among the President’s talking points.

He mentioned the word “terrorist(s)” 52 times, “terror” 13 times, “counter-terrorism” 5 times (with and without the hyphen), “anti-terrorism” once, the Filipino words “terrorismo” 4 times and “terrorista” twice.

He first spoke of the Maute Group on September 19, 2016, in a speech weeks after a bomb exploded in a Davao City night market, killing 15 people. Since then, he has mentioned “Maute” 73 more times.

The Maute Group clashed with government forces in Marawi City, Lanao del Sur, prompting the President to declare martial law in Mindanao on May 23. (Side note: Duterte has mentioned the phrase “martial law” 222 times.)

Terrorist group Abu Sayyaf was mentioned 130 times, while ISIS or IS got mentioned 190 times.

On the other hand, the President continued to pursue peace with rebel groups. He has mentioned the word “peace” 433 times, which includes 21 times for “peace talks” and twice for “peace talk.”

MNLF founder and leader Nur Misuari, whom Duterte usually called by first name in his speeches, was mentioned 190 times.

“NPA”, the acronym for armed group New People’s Army got mentioned 197 times, plus 42 more for “NPAs”. Compare this to its mother organization Communist Party of the Philippines or “CPP” which only got 8 mentions and to the National Democratic Front or “NDF”, with 15 mentions.

Duterte spoke about his main critic Senator Leila de Lima at least 85 times in his speeches. Senator Antonio Trillanes also got a tongue-lashing from the President 25 times.

Duterte criticized ABS-CBN and the Inquirer initially for the issue of extrajudicial killings, then later in early 2017 for carrying the story on alleged large deposits made to his bank accounts, which was exposed by Trillanes during the 2016 presidential election campaign. (READ: Duterte tells ‘rude’ media: Beware of ‘karma’)

He also usually spoke highly about some of his Cabinet secretaries. Using the search terms in bold font, their names appeared on the transcripts the following number of times:

The President’s partner Honeylet Avanceña and ex-wife Elizabeth Zimmerman got mentioned 5 times each.

His nicknames “Digong” and “Rody” were mentioned only twice and 13 times, respectively.

Here are other notable words and phrases in the President’s speeches, along with the number of times he mentioned each:

Ultimately, whatever words he chooses, Duterte makes clear his commitment to serve the country. In at least 37 instances, he said, “I will put at stake my honor, my life, and the presidency itself.” – Rappler.com

*Note: This computation is based on the Words per Page tool of wordcounter.net. We also used one of the President’s speeches of similar length and pasted it on Microsoft Word.