What’s the fuss about the Grab, Uber regulation issue? 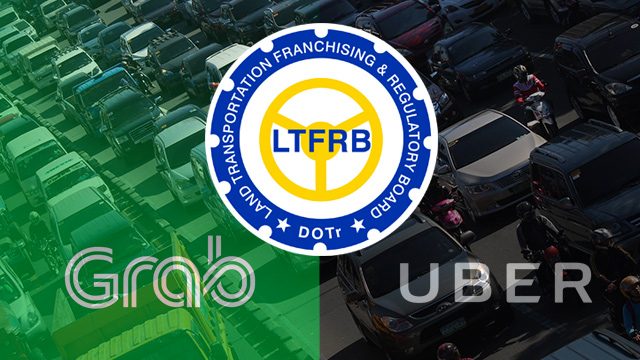 Facebook Twitter Copy URL
Copied
What's happening between the LTFRB and ride-hailing services? Here's a rundown of the ongoing controversy

MANILA, Philippines – Over the past couple of days, Filipino commuters took to social media to express their anger and frustration over reports that the operations of Grab and Uber may be adversely affected following a government regulatory body’s crackdown on unregistered drivers using the ride-hailing platforms.

The issue sparked fierce debate on both sides – with commuters saying Grab and Uber are essential to metro life and much more reliable than ordinary taxis, while the government insists that these need to be regulated to ensure accountability.

What’s the issue about? Here’s a rundown of the ongoing controversy.

Ride-hailing services Grab and Uber are considered Transportation Network Companies (TNCs), based on new transport categories created by the government back in May 2015.

Vehicles under Grab, Uber, and other similar ride-sharing services are considered part of the Transportation Network Vehicle Service (TNVS). The TNVS covers vehicles that provide pre-arranged transportation services for compensation.

The Land Transportation Franchising and Regulatory Board (LTFRB) approved Grab and Uber as TNCs in July 2015 and August 2015, respectively.

The TNCs are required to screen and accredit their drivers and register them with the LTFRB.

The LTFRB, meanwhile, is in charge of issuing permits to TNVS drivers: the provisional authority (PA), or a temporary permit valid for 45 days, and the Certificate of Public Convenience (CPC) franchise, which is valid for a year. On July 21, 2016, the LTFRB released Memorandum Circular 2016-008, which suspends the acceptance and processing of applications for Uber, Grab, and other ride-sharing services.

The order essentially stopped the release of temporary permits to Grab and Uber vehicles while the LTFRB further studied how to regulate the growing industry.

On July 11, 2017 the LTFRB ordered Grab and Uber to pay a fine of P5 million each for letting drivers with no permits or expired permits to still operate on their platforms.

Grab and Uber admitted that they accepted new drivers despite the LTFRB’s earlier order, citing strong passenger demand. Both companies said about 80% of their active drivers don’t have a PA or CPC franchise.

But some Grab and Uber drivers say it’s not their fault they are considered “colorum.” They point to the LTFRB’s earlier order stopping the processing of TNVS applications.

They also claimed that some 7,000 drivers who were already accredited did not get their PAs renewed last year. Because of this, many drivers had expired PAs by the end of 2016.

Aside from the hefty fine, the LTFRB also ordered Grab and Uber to clear out unregistered drivers by July 26 or face more fines.

But Grab and Uber filed separate motions for reconsideration. The LTFRB later agreed not to apprehend unregistered TNVS until it decides on the appeal.

While this came as a relief to Grab and Uber users and drivers, this decision did not sit well with operators of taxis, jeeps, and vans: they slammed what they called the LTFRB’s preferential treatment, saying they too should be spared from apprehension while waiting for the approval of their franchise applications.

For the LTFRB, the problem began with Grab and Uber. LTFRB chief Martin Delgra III said the TNCs may have deliberately withheld telling their “partner drivers” to come to the LTFRB to get a franchise before operating.

And despite public outrage on social media, the LTFRB said it’s standing firm on its position, saying the TNCs should explain to their peer operators why they were allowed to operate on the platform even without the proper permits.

LTFRB spokesperson Aileen Lizada also said that Uber and Grab trips represent a “minority” in the total number of trips in Metro Manila – they account for only 2% of the 21.5 million trips per day recorded in 2015.

But despite this, the LTFRB also acknowledged that the riding public will be harmed if it simply cancels the accreditation of the TNCs.

Adding to the controversy were statements made by Transportation Secretary Arthur Tugade, who said that the government should have a share from the income of Grab and Uber. The LTFRB later clarified that Tugade was referring to the unregistered vehicles.

Stoking more reactions was LTFRB’s admission that it lost the accreditation papers of Grab and Uber. The two companies’ accreditations are still pending renewal. Grab’s accreditation expired last July 3, and Uber’s is set to expire in August. How did the public react?

With the LTFRB’s crackdown on unregistered Uber and Grab vehicles, an estimated 15,000 drivers at most can remain on the road, out of the estimated 56,000 drivers.

Both Grab and Uber are seeking the support of their users, launching online campaigns. On Twitter, the hashtag #WeWantGrabUber trended as commuters expressed their anger and frustration.

Citing bad experiences with taxis, some netizens say Grab and Uber remain the safest way for them to commute. (READ: Cracking down on Uber and Grab will hurt commuters, not protect them)

Even the former LTFRB chief chimed in to say that the new government should listen to actual users of these ride-sharing services.

But some backed the government’s move, citing the need for accountability. During a House hearing, one lawmaker asked whether TNCs can be held accountable if a crash happens involving one of their vehicles.

Others also questioned the surge pricing system that they say needs to be further regulated.

Still, some questioned the very model of Uber and Grab. While its original idea was ride-sharing – those going a certain way can pick up co-passengers heading in the same direction – it quickly became a way to make profit, with some operating them similar to a taxi fleet. (READ: Let us go beyond #WeWantUberGrab)

Because of this, some point to TNVS units as just an addition to traffic, a position the Metropolitan Manila Development Authority chief also takes.

As of Wednesday, July 26, the LTFRB ordered all Grab and Uber drivers who registered with the service after June 30, 2017 to be deactivated.

The LTFRB is continuing meetings with the TNCs. The regulatory agency also plans to consult with Congress for a comprehensive law regulating the ride-hailing services. – Rappler.com