MANILA, Philippines – A huge mural and bust depicting Jose “Ka Pepe” Diokno greet visitors as they enter the halls of the Commission on Human Rights (CHR) in Quezon City.

Aptly called “Bulwagang Ka Pepe” (Ka Pepe Hall), the grand efforts of the Commission to memorialize the former senator aren’t unfounded – he is, after all, considered the father of human rights advocacy in the Philippines.

“No cause is more worthy than the cause of human rights. They are what makes a man human. Deny them and you deny man’s humanity,” Diokno once said. (READ: Hate human rights? They protect the freedoms you enjoy)

On Thursday, September 21, 43 years since he was released from prison, the CHR is set to unveil a monument honoring Ka Pepe who, together with other Filipinos, fought back during the “darkest years of Philippine history.”

Born on February 26, 1922, Diokno was somehow destined to be a lawyer despite setbacks such as the war.

The young Jose often tagged along with his father, lawyer and eventually Supreme Court associate justice Ramon Diokno, while he worked at the provincial courts.

It was also in his father’s law office where he continued studying as the war interrupted his law studies at the University of Santo Tomas.

In 1944, despite having no law degree, the Supreme Court allowed him to take the bar exams which he eventually topped – together with Jovito Salonga, who also went on to become senator. He worked in a law firm before public service called his name.

Diokno was appointed justice secretary by then president Diosdado Macapagal in 1961. He later became a senator under the Nacionalista Party – the same political party as Ferdinand Marcos – in 1963 until the declaration of Martial Law in September 1972. (READ: Martial Law 101: Things you should know) Often praised for his work at the Senate, Ka Pepe’s stint as a legislator focused on upholding human rights, pro-Filipino economic policies, and Philippine sovereignty. Above all, he believed that government officials serve the Filipino people.

“We must view public office as a way to serve the people, not to profit at their expense,” he once said.

But Marcos’ declaration and suspension of the writ of habeas corpus forced Diokno to resign from the party.

Despite the dark clouds enveloping Philippine politics then, he continued to work in the streets, often joining massive demonstrations against abuse of human rights and civil liberties, among others.

On Martial Law, he wrote: “And so law in the land died. I grieve for it but I do not despair over it. I know, with a certainty no argument can turn, no wind can shake, that from its dust will rise a new and better law; more just, more human and more humane. When that will happen, I know not. That it will happen, I know.”

Diokno’s move to side with the opposition against tyranny led to his arrest on September 23, 1972 –among the first arrests made under military rule.

He was first held at Fort Bonifacio before being transferred to Fort Magsaysay, Nueva Ecija, along with fellow senator Benigno “Ninoy’ Aquino Jr.  (READ: Remembering Alpha and Delta)

Diokno was imprisoned for two years, without charges, in Fort Magsaysay. 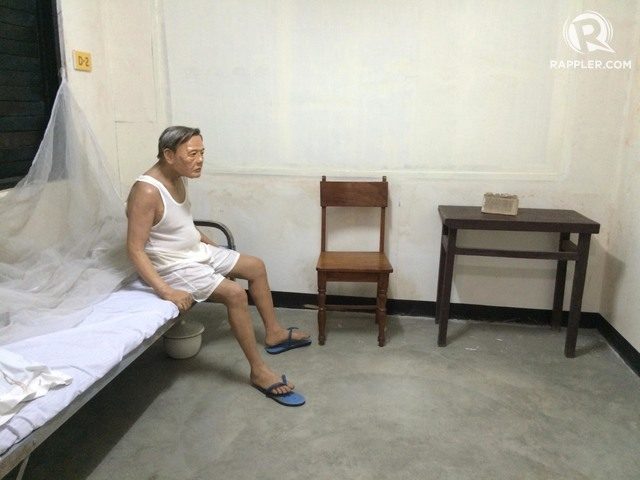 On September 11, 1974, he was released from imprisonment.

Wasting no time and undeterred by the continuing threats and the confinement he just experienced, he established the Free Legal Assistance Group (FLAG).

Composed of a small group of lawyers, FLAG provided pro-bono legal advice to political prisoners and other victims of Marcos’ reign. The group expanded its coverage to help indigenous people threatened by military presence, peasants, and other social workers.

His work was guided by his belief that “there is one dream that we all Filipinos share: that our children may have a better life than we have had. To make this country, our country, a nation for our children.”

In 1986, after the downfall of the Marcos dictatorship, Diokno was appointed to head the Presidential Committee on Human Rights – which would later become the Commission on Human Rights.

He was also involved in peace negotations, even leading the government panel in its talks with the National Democractic Front of the Philippines.

Despite working with the government, Diokno was not afraid to go against the decisions of then president Corazon Aquino.

Jose Dalisay quoted Diokno in his essay as saying:

“Above all, we can strengthen the President by pointing out what she is doing that is wrong. I think we weaken her if we support everything she does even when we do not agree with that she is doing. Yes-men are not compatible with democracy. People expect our President and public officials to make mistakes – but of course, to correct them as soon as they are convinced that they have erred. How can they know they have erred, if we do not tell them so?”

A little over a month after, on February 27, 1987, the country’s forefront human rights advocate succumbed to lung cancer. He was 65. Continuing the fight vs oppression

The legacy of Ka Pepe lives on 3 decades since his passing. His children continue to work anchored on the advocacies their father fought for during his years as a politician, lawyer, and human rights defender.

In recent years, the group has condemned the revival of the death penalty and the violent anti-illegal drugs campaign of the government, saying it has “spawned a nuclear explosion of violence that is spiraling out of control and creating a nation without judges, without law and without reason.”

Diokno’s descendants have also been very vocal about their stand.

In a statement following the death of 17-year-old Kian delos Santos in August 2017, Diokno’s 10 children, 18 grandchildren, and 10 great-grandchildren condemned Duterte’s bloody war against drugs and the extrajudicial killings it spurred.

“The Diokno family, guided by the principles of our parents, pledges to stand for justice and human rights. We lend our voices to the raging cries of the thousands killed and call on the government to comply with the Constitution and laws of our country, and stop the bloody war on drugs, which has only resulted in death, and has not reduced the influx of drugs into the country,” his daughter Maria Serena Diokno said.

During his 30th death anniversary in February, his children said that if the former senator were alive today, he would urge people to “stand firm, find our voice, and not seal our eyes.”

This is true, after all, as Ka Pepe believed in the power of the people in fighting oppression:

“Tell me, for I have never come across it: at what period in our history did our people stop fighting oppression? Armed with little more than an enduring heart, an ear for music and an eye for beauty that betray a fascination with harmony, and a longing for justice without which there could be no harmony, they have for centuries, pursued a dream that will not die: the dream of a noble society.”

“They have been – they still are – deceived and deprived, defeated and defamed,” he added. “Yet they struggle on, however bumbling, mistaken or misguided their efforts may at times seem to us.”

Now, more than ever, we need to live by Ka Pepe’s words. – Rappler.com