Pets for mental wellness: How dogs play a role in healing, therapy 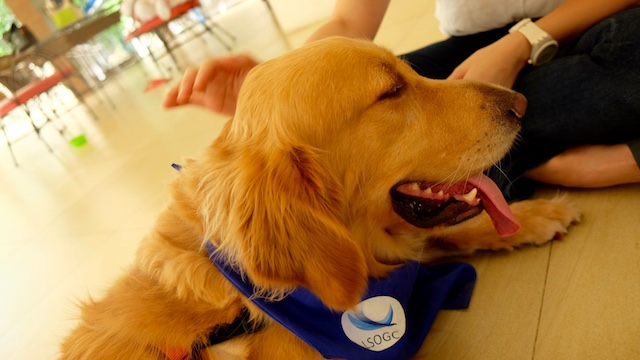 MANILA, Philippines – He turns heads when he walks down the school corridors. Students stop in their tracks and break into smiles at the sight of him. His sessions at the university’s guidance office get filled up faster than some professors’ classes – because it’s not every day you get a chance to play with a dog while in school.

Ateneo de Manila University’s guidance office has been getting a lot of attention in recent months, thanks to its newest member, who happens to be 3 years old and extremely cuddly.

Meet Bubu, a 3-year-old golden retriever who works as a therapy dog for the Loyola Schools Office of Guidance and Counseling (LSOGC). He’s the resident therapy animal of Communitails, an organization founded in 2014 that seeks to improve people’s health and well-being by tapping into the human-animal bond.

Using dogs for therapy isn’t new. The Philippine Animal Welfare Society has been helping bring comfort and happiness to orphanages and cancer ward patients since 1997 through its Dr Dog program. In other countries, therapy animals are part of the treatment process for a host of health problems.

In the Philippines, though, it’s a relatively underexplored and untapped field, said Carla Azucena, president of Communitails and a medical doctor by training.

But with Filipinos becoming more aware of the importance of mental health, Azucena sees the potential of animal-assisted interventions (AAI) to become part of the treatment options for those suffering from mental health issues.

That’s where therapy animals can come in – with them around, patients can feel a little more relaxed and at ease, bridging the gap between patient and doctor.

Animal lovers know all too well the surprising ways pets uplift their mood and bring joy and comfort, but there’s more to AAI than just warm, fuzzy feelings.

Communitails co-founder and doctor Camille Ann Asuncion said several studies have explored the psychological and physiological benefits of AAI to help treat a host of health problems – from anxiety to depression to post-traumatic stress disorders, to name a few.

AAI taps into these positive benefits by designing activities that make the animal part of the treatment process.

With a dog present in the room, for instance, patients would tend to give more attention to the dog, or feel more at ease and receptive to therapy, because they feel dogs are less judgmental than humans.

“It’s hard when your therapist or anyone would ask you, ‘How are you feeling?’ But if you have a dog to talk about, then all of a sudden the focus goes to them and not just you and your sad feelings,” Azucena said.

But this doesn’t mean simply owning pets eliminates the need for a mental health professional. AAI, she explained, is just one part of the therapeutic process – not an alternative.

“What therapy animals are supposed to do is to facilitate the interaction between the therapist and the participant. Sometimes as a professional, there’s difficulty in establishing rapport and establishing a safe and comfortable presence with your clients, so that’s what a therapy animal does,” Azucena said.

For Azucena, AAI can also help encourage those with mental health issues to take that step towards getting help.

Therapy dogs can act as that entry point for patients to slowly open up and talk about their concerns. It can be particularly helpful for those who suspect that they may have mental health problems, but hesitate to get professional help.

“We’re hearing now about certain guidance counselors who have clients that start with just talking about dogs and their pets. Just bringing the dog in makes the office more attractive, not just those with existing conditions, but also those predisposed to that,” Azucena said.

“We want as much as possible to make this a wellness approach. Even before they have signs or symptoms, they already have a friendly approach to the guidance office. We’ve heard stories of people who became more open to therapy because there’s a dog coming up,” she added. 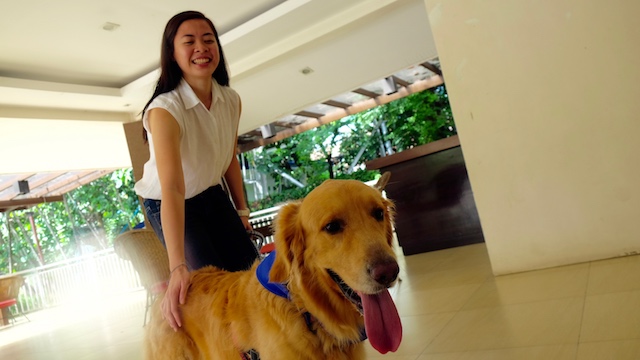 AAI comprises both animal-assisted activities (AAA) and animal-assisted therapy (AAT). Designing AAI programs would usually depend on the goals of the therapy treatment, the mental health professional’s own assessment and recommendations, as well as the dog’s temperament and preferred play activities.

Veterinarian Rohani Cena said a tailor-fit approach is needed for each situation to know what appropriate interventions would be needed.

But once these goals are decided, there are many creative ways to let an animal be part of the healing process.

“If the goal of the client is to improve socialization, the activity would be to allow the client to walk the dog. People would approach them, so he would have to interact. If the objective is to create teamwork, then we can play games with the dog,” Azucena also said.

For their project in Ateneo, Communitails’ preliminary survey found that the student body needed a way to relieve stress and anxiety, so they designed play sessions that would provide a quick bout of stress relief for the students.

For half an hour, students surround Bubu and just play with him: petting and stroking his fur, trying to shake his paw, or getting him to do tricks. They ask about his favorite things and activities, or they just simply sit around and enjoy the presence of a dog relaxed and at peace. At the end of the session, the students end up feeling a little bit calmer and happier.

Unlike AAT, AAA is less structured, and doesn’t have a therapeutic goal.

In the future though, Azucena said they hope to provide AAT sessions with the LSOGC to target students suffering from specific mental health problems like anxiety and depression.

While cuddling a dog as part of therapeutic treatment may sound like an enticing option, it won’t always work for everyone.

Some obvious cases where AAI won’t work as part of the treatment process include clients who don’t like animals or fear dogs, or those who have allergies. AAI is also not ideal for patients with a history of being violent or with severe behavioral changes.

“You don’t want the person to hurt the animal and for him to hurt himself. Animal-assisted therapy isn’t for everybody, and it benefits those who already have a human-animal bond versus those who’ve never had a pet and think the dog will bite them,” Azucena said.

That’s why the role of the mental health professional is important, she added – the therapist should know the patient well enough to assess whether AAI can be a welcome addition to the treatment process.

With AAI, there are also health and safety concerns, particularly the possibility of transferring diseases, but Cena said these risks can be mitigated when designing AAI activities.

There have also been questions on animal welfare – the human may be happy and content, but does the dog feel the same? For now, Bubu only works two sessions a month, with each session split into 30- to 45-minute blocks, to avoid overwhelming him and stressing him out.

The scientific underpinnings of AAI have also been called to question, particularly the soundness of the research methods used in some of the studies to back AAI. Asuncion noted that some questions remain up for additional research and discussion: Can AAI bring about long-term benefits, or will the effects fade away when the animal stops coming in with the therapist? Is there an effective “dose” or amount of animal interaction needed for the results to be seen?

While there have been studies on AAI’s benefits for human well-being, Asuncion also noted that these were all conducted abroad.

“There’s no formal research yet in the Philippines. Aside from our advocacy on the human-animal bond, we also want to conduct research in the local setting. It would back up AAI – because right now, we know about the personal benefits from those who have experienced being around animals. But it has to be more evidence-based,” she said. 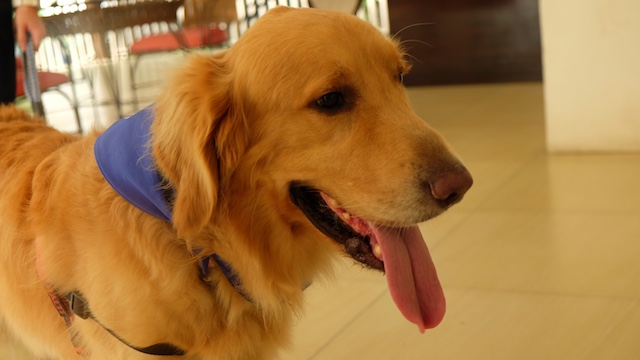 Bubu and the Communitails team have only been spreading cheer around Ateneo for less than a year, but Azucena said the positive response has already been overwhelming. Their Facebook page inbox is filled with requests for Bubu to come visit them, and questions on his next upcoming visit.

There was one particular message though that stood out for Azucena.

“One of the messages said, ‘Thank you for giving me so much hope.’ I thought, ‘What did we do that she felt hope?’ She had major depressive disorder, and she was looking up alternative forms of therapy,” Azucena said.

“In my experience as a doctor, I just hear patients say thank you. But when I’m with Bubu, and we’re just walking along, passing by, people would say ‘Thank you, you made my day.’ Super overwhelming reaction,” she added.

Beyond the therapeutic goals of AAI, though, Azucena hopes that the good vibes and uplifted moods inspired by therapy animals can help build a community of individuals who would look out for each other.