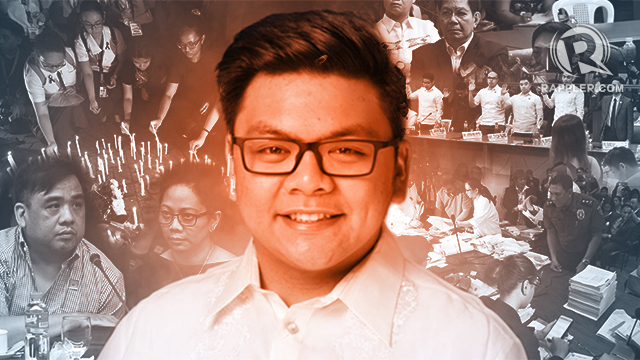 The freshman law student at the University of Santo Tomas is believed to have died from hazing injuries inflicted by members of the Aegis Juris Fraternity.

Separately, the Senate and the Department of Justice (DOJ) are conducting investigations into the incident.

Evidence emerged that fraternity members planned how they would cover up what happened. The law school’s dean, Nilo Divina, is suspected of being the “big brother” referred to by the Aegis Juris members when they were discussing the cover-up, as captured in a Facebook Messenger thread.

One of those implicated has been admitted as state witness, but a senator initially suspects he is a Trojan horse.

Seventeen persons are facing criminal complaints in relation to the incident.

Here’s a recap of what happened:

September 17, 7:50 am – Horacio Castillo III or “Atio” to his family is found lying on a pavement, covered with a blanket, at the corner of H. Lopez Boulevard and Infanta Street in Balut, Tondo, Manila, by medical technologist John Paul Sarte Solano, who claims he was on his way to buy a cigarette.

A red Mitsubishi Strada stops to help him bring the then-unidentified victim to the hospital.

9:21 am – Atio is declared dead on arrival at the Chinese General Hospital.

Evening – Atio’s parents receive an anonymous text, tipping them about their son’s whereabouts. His parents find him at the Archangel Funeral Home in Sampaloc, Manila, with bruises on both arms, cigarette burns, and candle wax drippings all over his body.

He explains that his son was recruited to join the Aegis Juris Fraternity – a fraternity within the University of Santo Tomas (UST) Faculty of Civil Law. Dean Nilo Divina is a member of the fraternity.

Afternoon – Divina bans officers and members of the fraternity from entering the UST campus.

September 19 – The MPD says John Paul Solano will be invited for questioning and will be asked to produce a sworn statement. Sources with access to the fraternity say Solano is also a member of Aegis Juris.

September 20 – The MPD tags as primary suspects Antonio Trangia and his son, Ralph, an official of Aegis Juris fraternity. The red Strada that Solano supposedly flagged down to help bring Castillo to the Chinese General Hospital is found to be registered to Antonio Trangia.

Sixteen Aegis Juris frat men who are suspects in Castillo’s death are put on the immigration lookout list. Solano, who is found to be a member of the Aegis Juris Fraternity, is part of the list.

The Senate orders a probe into Castilo’s death.

The Uber driver Atio booked the day before he died tells the police Castillo seemed to be weary when he booked the trip.

The exchanges show the fraternity members knew they were doing something dangerous and prohibited. There was also an intent to cover up the incident.

September 21 – Ralph Trangia, one of the suspects and identified by the MPD as an officer of the Aegis Juris fraternity, leaves for Taipei. Trangia leaves a day before he and his father, Antonio Trangia, are named by the MPD as among the 3 suspects in the death of Atio.

September 22 – Solano, primary suspect in Castillo’s death, surrenders to Senator Panfilo Lacson. Solano apologizes for giving a “false statement”, claiming he only found Castillo’s body – when, in fact, he is really a member of the Aegis Juris Fraternity.

Solano says his participation in the fraternity hazing was limited only to providing “medical assistance” when needed, and that he was not at the initiation rites.

Solano is turned over to the MPD.

The Taipei Economic and Cultural Office in the Philippines says Trangia was a transit passenger and did not enter Taiwan. He went to Chicago, USA.

September 25 – Castillo’s parents condemn the killing of their son during a Senate hearing. His father cries over how the organization treated their son “like an animal.”

Solano claims an Aegis Juris brother asked him to lie to the police by telling authorities that he just saw Atio sprawled on the road in Balut, Tondo.

During an executive session with senators, Solano identifies 6 fraternity brothers and one non-member who are allegedly involved in the death of Castillo.

A report says the MPD has filed cases of perjury, murder, robbery, obstruction of justice, and violation of Republic Act 8049 or the Anti-Hazing Law against Solano.

Sixteen other suspects are charged with murder, robbery, and anti-hazing law charges, along with some identified members of the Aegis Juris fraternity and its sister organization, the Regina Legis et Juris Sorority.

September 26 – The MPD begins the investigating the Regina Legis et Juris sorority. The sorority’s members deny any knowledge of, much more participation in, the incident.

September 27 – Castillo III is laid to rest at the Manila Memorial Park in Parañaque City. His father refers to him as “a good son, a perfect son, the best son any parent could ever have.”

The Department of Justice orders the release of John Paul Solano.

September 28 – Members of the Scene of the Crime Operatives (SOCO) of the MPD enter the office of the Aegis Juris Law Resources Center on Navarra Street, Sampaloc, Manila. They find paddles with Aegis Juris markings.

Authorities say the place is “most probably” where Castillo was initiated.

The MPD releases Solano, based on the DOJ’s order.

October 3 – The Castillo family, through their lawyer Lorna Kapunan, announces plans to include Dean Nilo Divina and “other officials” of UST in the criminal charges they will file. They accuse UST officials of violating the Anti-Hazing Act for alleged “cover-ups” on the case.

Solano accuses the MPD of falsifying his testimony. His lawyers say there was no qualified policeman to administer a sworn statement when Solano was brought in for questioning at the police station.

October 4 – President Duterte meets with Castillo’s parents in Malacañang. He assures them that justice will be served.

October 6 – Dean Divina files a libel complaint against Kapunan for a television interview where the lawyer said Divina recruited Castillo to Aegis Juris.

The Castillos point out that Divina had heard of Atio’s death a day earlier than they did, but the dean did not bother to reach out to them.

October 10 – Ralph Trangia returns to the country. The DOJ offers witness protection to him.

October 18 – The Senate releases the testimony of Solano recounting the morning Castillo was killed.

The non-fraternity member is the family driver of the Trangias who brought Castillo to the hospital.

Solano also pinpoints Arvin Balag as the head of the fraternity. He says it was Balag who asked him to lie about finding the body of Castillo in Tondo.

MPD Director Joel Coronel cites the chat messages of fraternity members planning to “cover up, conceal, to avoid and evade the prosecution of this case.”

The Senate panel cites Balag in contempt for evading questions during the hearing and orders his detention.

October 24 – The camp of Aegis Juris frat man Solano says Castillo III may have died of a pre-existing heart condition, and not of hazing injuries.

Another Aegis Juris fraternity member and suspect, Mark Ventura, admits to participating in the initiation. He becomes a state witness and tells all.

Ventura says Castillo was beaten up severely until his muscles swelled.

“I trust that Mr. Ventura will tell the whole truth in the spirit of remorse. I hope that others will follow suit,” he says.

Aguirre narrates Ventura’s statement that it was Aegis Juris fraternity master initiator Axel Munro Hipe who called the shots and led the almost 4-hour hazing rites, which led to Castillo’s death. Hipe’s name was in the Facebook group chat where alleged members of the Aegis Juris fraternity planned the initiation rites.

October 26 – The DOJ puts UST’s Nilo Divina on an immigration lookout bulletin, with 63 others.

October 27 – Solano’s camp shows Castillo’s death certificate indicating that the “provisional cause of death” was Hypertrophic Cardiomyopathy or HCM.

Castillo’s father disputes Solano’s claims and says the autopsy on his son would show he died of blunt trauma resulting from hazing.

October 30 – Lead frat man Arvin Balag says in his counter-affidavit that there was no witness to Castillo having been abused or dealt with superior strength.

Balag cites Castillo’s pre-existing heart condition as a possible cause of his death.

UST’s Divina also files his counter-affidavit with the DOJ, denying any liability in Castillo’s hazing death.

Divina shows CCTV footages that can serve as proof he did not meet with Castillo days before the initiation rites, contrary to the claim of the boy’s parents.

November 6 – The Senate questions the claim of frat man Solano that Castillo died of a pre-existing heart condition.

Lacson asks the DOJ if they have considered the possibility that Ventura is being used to deceive investigators or conceal the truth. The senator takes back his comment. He says the fact that Ventura switched lawyers from an Aegis Juris member to a non-member is an indication that he is severing ties with the fraternity.

He says that fraternity Grand Praefectus Arvin Balag will stay a little while longer in Senate detention.

Senators also grill Divina and Office for Student Affairs director Socorro Guan Hing for allowing Aegis Juris fraternity to continue its activities even though it is not a recognized organization this school year.

During the Senate hearing, Ventura says that it took the fraternity members 30 to 40 minutes before deciding to bring Atio to the hospital. He also details what happens during hazing rites. – Rappler.com

*Editor’s Note: An earlier version of this story mistakenly indicated Castillo’s age as 17. It has since been corrected.