Facebook Twitter Copy URL
Copied
(UPDATED) About P130 billion in proceeds is expected from the first package of the Tax Reform for Acceleration and Inclusion bill, which the Senate and the House of Representatives are set to ratify

MANILA, Philippines (UPDATED) – President Rodrigo Duterte has promised an overhaul of the country’s tax code. Now, over a year into his presidency, the Senate and House of Representatives are set to ratify on Wednesday, December 13, the first package of the Tax Reform for Acceleration and Inclusion (Train) bill.

The Train bill is crucial to funding most of Duterte administration’s ambitious “build, build, build” infrastructure program. The first package, to be implemented on January 1, 2018, is expected to generate P130 billion.

While the Senate and House of Representatives differed on how they wanted to restructure the country’s tax system, both have said they were guided by one objective: to make taxes “simpler, lower, and fairer” for Filipinos.  (READ: Will tax reform really hurt the poor?)

What’s inside the bicameral version of the Train bill? The lowering of income tax is a key component of the tax reform bill.

According to a media briefer from the Senate committee on ways and means, the bicam-approved Train bill sees income tax rates reduced for almost all the 7.5 million individual income taxpayers.

Self-employed professionals will also see new income tax rates with the introduction of an 8% flat tax on gross sales or receipts instead of income tax and percentage tax to be filed once a year.* But with the loss of revenue from income taxes, where is government planning to collect more money?

While the lowering of income tax is expected to increase take-home pay, taxpayers will see a price increase for cars, fuel, tobacco, and some beverages among others. Under Train, a sweetened beverage tax of P6 per liter will be levied on drinks using artificial sweeteners. Drinks using high fructose corn syrup will be imposed a P12-per-liter tax.

The bill excludes all kinds of milk, natural fruit and vegetable juices, and medically indicated beverages from the sweetened beverage tax.

Instant coffee is also exempted from the tax since it is among the most consumed food items of ordinary Filipinos, according to the Senate committee on ways and means.

Higher fuel prices are also to be expected under the new tax reform package. Incremental price increases for diesel, liquified petroleum gas (LPG), and gasoline over a 3-year period will see a tax of P6, P3, and P10 per liter, respectively, by 2020.

Train also cites a safeguard provision that would suspend the increases if Dubai crude oil exceeds $80 per barrel.

It also grants the Department of Finance (DOF) the power to require fuel making in order to combat oil smuggling. Finance Secretary Carlos Dominguez had said the hike in prices of automobiles would mainly impact the higher social classes who could afford to buy luxury cars.

Tobacco will also be more expensive under the Train bill. 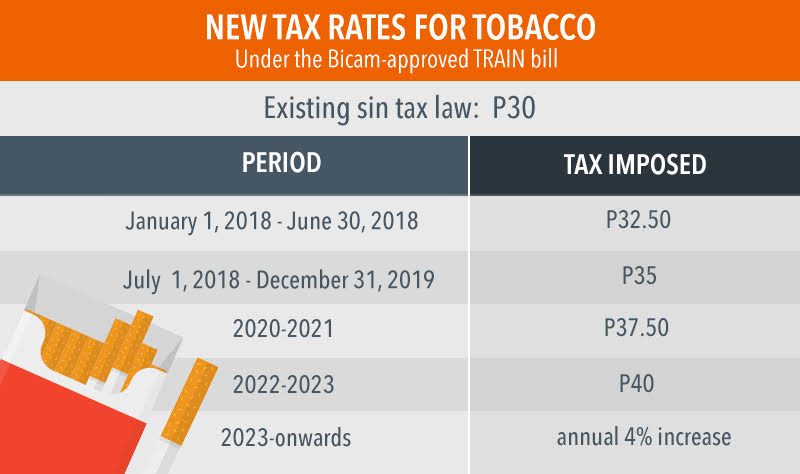 Increases in coal tax are also to be expected under the Train bill.

Excise tax rates on indigenous petroleum will also increase from 3% to 6%.

Under Train, procedures needed to address deformities from congenital or developmental defects or abnormalities, personal injury, accidents or trauma, disfiguring diseases, tumors, viruses or infections will not be taxed.

Under Train, an increase in the value added tax (VAT) threshold from P1.9 million to P3 million is also expected. This would mean small business with annual sales of P3 million and below would be exempt from paying VAT, which would hopefully encourage growth and job generation from the due tax relief.

The following sectors and individuals are also exempted from VAT: Three years into the effectivity of Train, the following items will be VAT-exempt:

In addition to this, instead of being granted VAT exemption, government-owned and controlled corporations, state universities and colleges, and national government agencies will shift to a form of subsidy through the tax expenditure fund under the national budget.

A flat rate of 6% for estate tax and donor’s tax will also be imposed under the bicam-approved Train bill.

Estate tax – or the tax on the right of a person to transfer his or her state to lawful heirs and beneficiaries at the time of death or on certain transfers – was previously levied based on a tax schedule where an estate worth P200,000 and over was taxed between 5% to 20%.

It will now be subject to a flat rate of 6%. 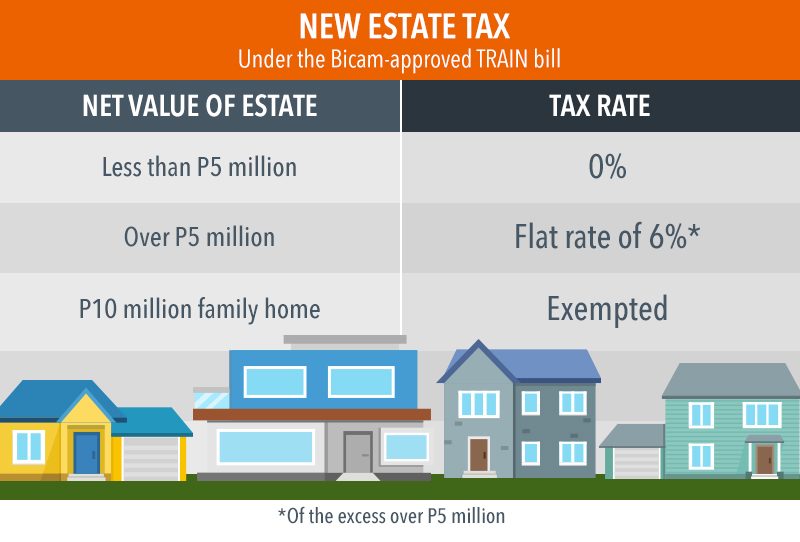 Family homes that are worth up to P10 million, however, will be exempted from estate tax. Currently, family homes worth P1 million are exempted.

Passive income and other taxes

New rates for the documentary stamp tax and final tax on currency deposit units are included in the bicam-approved Train bill.

Tax rates for stocks not traded in the stock exchange as well as the stock transaction tax are increased under the bill. 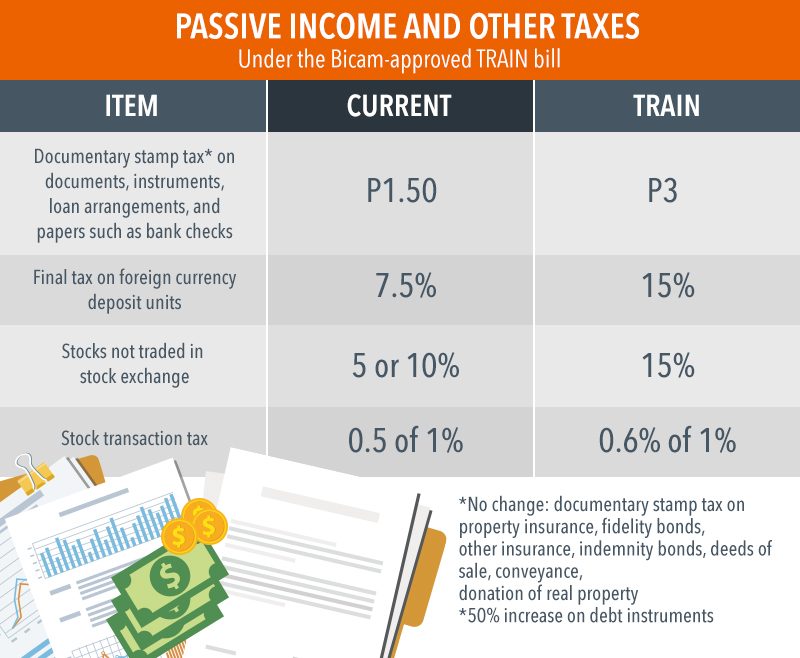 Where will tax revenues go?

According to the bicameral committe, here is how taxpayers money will be spent: About P130 billion in proceeds is expected from the first package of the tax reform program. – Rappler.com

All graphics by Alyssa Arizabal

* (EDITOR’S NOTE: In an earlier version of this report, the info graphic about self-employed professionals indicated that those earning more than P3 million would be taxed a flat rate of 8%. The office of Senator Juan Edgardo Angara, sponsor of the bicam-approved Tax Reform for Acceleration and Inclusion (TRAIN) bill, clarified that this segment would instead be taxed following the income tax rates indicated in the table in the article. We’ve replaced the graphic with the correct information.)