Apart from the “MRT experience” of waiting in line and squeezing in like sardines in a can, operations were somehow “regularly” disrupted, forcing passengers to get off the train or walk along the tracks.

According to MRT3’s service status page, the railway system suffered 516 glitches from January 1 to December 31 in 2017 – an average of 10 breakdowns a week.  (READ: MRT woes: How often do they happen?)

It was built to provide a speedy, comfortable ride to the riding public but has since become a source of exhaustion and frustration of many metro commuters. (READ: The MRT Survival Guide)

Are you a regular MRT3 rider? Rappler looked back on some of the worst incidents that happened on the train system in 2017:

31 breakdowns in a week

The line suffered a record 31 breakdowns within the week. The same month also has the most incidents in 2017 at 61 – of which 57 incidents are due to “technical problems”, according to the MRT3 website. (READ: #AnimatED: Tragic rides, drastic steps for the MRT) 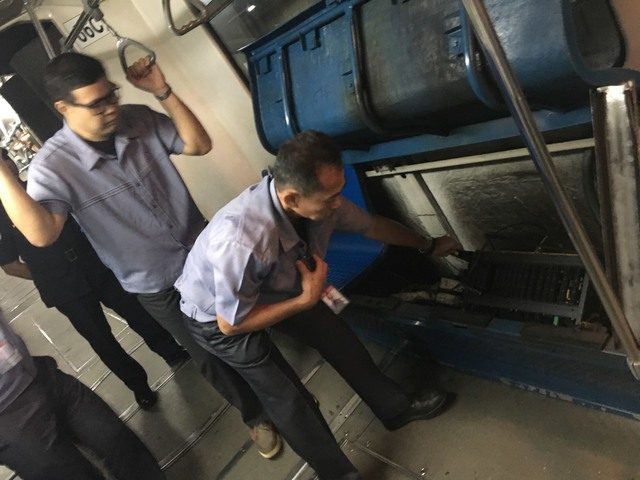 On September 18, following the worst week to ride the MRT3, a passenger seat inside the train caught fire around 6 am at Santolan Station.

According to authorities, the regulator board under the seat inside coach 66 caught fire. The driver of the train put out the fire with an extinguisher.

There were passengers on the train car but no one was injured.

Operations halted due to a diaper On October 23, a used adult diaper caught in one of MRT3’s power lines along Ayala Station stalled rush hour operations.

Then Transportation Undersecretary Cesar Chavez said they had no idea how the diaper landed on the power line.

The incident halted operations from Taft Avenue to Boni Stations around 6:16 am, affecting thousands of commuters that day. Normal operations resumed more than an hour after, around 7:43 am.

A woman lost her arm Perhaps the most shocking MRT3 incident in 2017 was when a passenger’s right arm was severed in an accident at the Ayala Station on November 14.

The victim felt lightheaded as she alighted from the train and then got caught in between the first and second train cars of the MRT3. Her arm got severed in the process.

A day later, on November 15, doctors were able to successfully reattach the passenger’s arm, thanks to another MRT passenger, a medical intern, who helped secure the victim’s right arm. (READ: ‘Do not panic in accidents,’ says medical intern who helped MRT victim) Commuters were forced to walk along the MRT3 tracks several times in 2017 due to technical problems but the November 16 incident was quite different.

Around 9 am, about 140 passengers walked from Ayala Station to Buendia Station as their train car got detached from the main train body. (READ: Commuters share most horrible MRT experiences)

MRT3 management claimed possible sabotage, as the detachment is only possible through human intervention. This claim was supported by National Bureau of Investigation after a technical inspection on November 29.

After being involved in a year-long squabble with previous maintenance provider Busan Universal Rail Incorporated, DOTr ended the contract with BURI and filed a graft case against former transportation secretary Joseph Emilio Abaya and the company.

As glitches got worse throughout the year, lawmakers urged Transportation Secretary Arthur Tugade to resign over MRT woes but he refused and said “not all problems can be addressed with resignation.”

Days after Tugade was asked to resign, Chavez submitted his resignation letter out of “delicadeza (sense of priopriety).” At the time, Chavez was transportation  undersecretary for railways. (READ: Senators laud Railways Usec Chavez after resignation)

Transportation officials also shunned calls for a temporary suspension of MRT3 operations until all glitches could be fixed, as this would only cause great inconvenience to commuters. Instead, operating hours were reduced to add more time for maintenance checks.

MRT3 Director for Operations Mike Capati assured the public that the MRT3 is safe amid the glitches.

Malacañang promised a better MRT3, saying that President Rodrigo Duterte will “apply the same political will” he showed in the campaign against illegal drugs to address the railway system’s problems.

Will Metro Manila finally experience an improved MRT3 in 2018?– Rappler.com