What you need to know about Charter Change 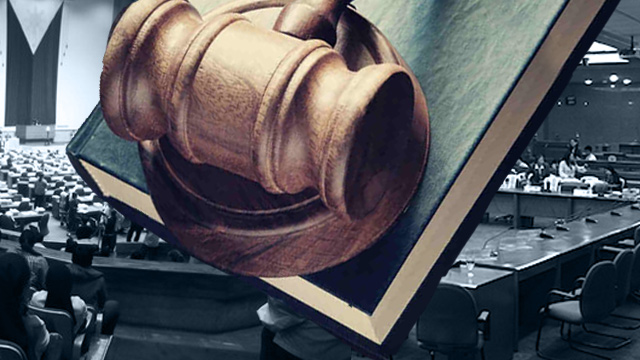 MANILA, Philippines – President Rodrigo Duterte has been pushing for a shift to federalism even before he was elected into office in 2016. Now, with the aid of his allies in Congress, the process of constitutional reform has begun.

The two houses of Congress are looking into convening into a Constituent Assembly (Con-Ass) but that would need a vote of three-fourths of all members. The Senate and the House of Representatives, however, differ on whether to vote jointly or separately as the 1987 Philippine Constitution is silent on the manner of voting.

This is just one of the many issues that need to be threshed out in the bid to amend the Constitution, a process that needs to be closely monitored, according to constitutional law experts Rappler talked to.

What are the other important questions that need to be raised?

What is Charter Change?

What are the changes that can be implemented?

Bodies can either propose amendments or revisions to the 1987 Constitution.

Amendments refer to changes that do not affect the overall structure and basic principles of the Constitution. Revisions are changes that involve alterations in the structure.

For example, changing the provision on the term limit of the President is an amendment while an overhaul of the government structure to federalism is a revision.

How can the 1987 Philippine Constitution be changed?

The process of changing the Constitution, according to retired Supreme Court (SC) justice Vicente Mendoza, can be categorized into two stages – the proposal stage and the ratification stage.

In the first stage, changes are proposed by a Con-Ass or a Constitutional Convention (Con-Con), or through a People’s Initiative.

Congress, through a vote of three-fourths of all members, can convene into a Con-Ass. This body can propose both amendments and revisions.

A Con-Con is made up of elected delegates and can propose both amendments and revisions. Congress, by a vote of two-thirds of its members, can call for an election of its members.

A People’s Initiative can only propose amendments through a petition of at least 12% of the total number of registered voters, according to Article XVII of the  Constitution. The process is provided in Republic Act 6735 or the Initiative and Referendum Act.

What’s a more ‘suitable’ method among the 3 ways to propose changes?

For retired SC justice Adolfo Azcuna, one of the framers of the 1987 Philippine Constitution, “all are suitable.”

“All are suitable, one is not considered as exclusive,” Azcuna told Rappler. “They can be resorted to as needed so hindi naman na dapat ganito lang (it’s not necessarily just this way)….They’re all equally good and effective means if pursued properly.”

The dominant move right now is for the Congress to convene into a Con-Ass because, according to Speaker Pantaleon Alvarez, it is “cheaper and faster.” In fact, on Monday, January 15, Senator Panfilo Lacson filed Senate Resolution 580 for the Senate to constitute itself into a component of the bicameral Con-Ass.

While there is no best way to amend the Constitution, UP law professor Dante Gatmaytan noted that Duterte allies dominate Congress.

“An assembly beholden to the President may not necessarily produce the best document,” he said. “Any project that involves drafting the fundamental law of the land will benefit from serious deliberation founded on contending views, not a mere collection of yes men.”

Mendoza, meanwhile, preferred a Con-Con even if the process is costlier, considering the envisioned end-product of the process – a shift to federalism.

“A change to a federal system is a real paradigm shift in our constitutional order requiring the calling of a Con-Con, and the expense of holding it in order to have a real representative assembly of the people to undertake such a momentous change should not deter us from holding one,” he told Rappler.

“If we can spend billions of pesos on infrastructure projects, we should be willing to spend a fortune on the infrastructure of government for the nation,” Mendoza added.

But there are two chambers in Congress. How will they vote in a Constituent Assembly?

Unfortunately, Article XVII of the 1987 Philippine Constitution is silent on the manner of voting. It does not indicate whether the two chambers should vote jointly or separately during the process of changing the Constitution.

While there are proposals from the House to vote jointly, senators have expectedly opposed the move. It has become a “unifying issue” among members of the majority and minority bloc in the Senate. (READ: Joint voting on Cha-Cha? Senate’s problems, plans against it)

Some senators have agreed to convene Congress into a Con-Ass on the condition that the two houses vote separately.  With the nearly 300-member House against the 23-member Senate, the voice of the Senate would be deemed irrelevant in a joint vote.

“Voting jointly means that the House alone decides the issue because they outnumber the senators,” Gatmaytan said. “That is why the Senate wants ‘separately’ especially if the proposal is to make a unicameral Congress.”

He also said that the issue on voting will most likely reach the High Court.

Azcuna, for his part said, “We have still a system under this Constitution that an interpretation can be made by those implementing it and ultimately by the Supreme Court.”

After the body approves the proposals, what happens now?

Once the proposals are “approved” in the first stage – regardless of whether done through a Con-Ass or Con-Con – these will be subject to a national plebiscite.

Amendments or revisions are only valid once ratified by a majority of votes, according to Article XVII of the Constitution.

The schedule of the national plebiscite, to be set by Congress, should be within 60 to 90 days after the body approves the proposal.

According to Mendoza, the period before the national plebiscite is ideally the time proposals are discussed with the public. This information dissemination would help the people decide on  how to vote.

“There should be a public discussion in the newspapers, in the schools, wherever people gather,” he said. “The idea is for them to keep talking within that period, that’s the study period and it’s the duty of the people, as citizens of an independent nation, to study the proposals very well.”

A national plebiscite is an exercise in the “power of the people” when it comes to the law.

“To change the Constitution, the power is with the people. Not even Congress – Congress can only propose changes but the change must be done by the people so it is what you call the constitution of sovereignty. Sovereignty is the highest power of the people to make or change the law.

What should the public watch out for?

The Constitution is the supreme law of the land and will affect each individual in the country, including future generations. It is necessary then to keep a close watch over the Cha-Cha process.

According to Gatmaytan, the public should monitor “every aspect of the amendment process” and be wary of watered-down and abusive provisions such as those on  accountability of public officials and term limits.

“We should maintain a strong system of checks and balances that prevents the abuse of political powers,” he explained.

Mendoza, meanwhile, encouraged the people to monitor the proceedings “from the very start,” particularly the proposal stage, to lead to a “success of constitutional government in this country.”

“How many times do we have to remind ourselves that eternal vigilance is the price we have to pay not only for our liberties but to have good government?” he said. “Bad government is what we get for public indifference to the most important task of writing the basic document of our nation.”

Mendoza said anyone who is against any proposal should speak up immediately and not wait until the last minute.

“The point is, if you are opposed to the proposal, doon pa lang sa umpisa ay kontrahin mo na (oppose it from the very start) by all means available to you,” he said. “Write about them, oppose them in public assemblies. Do not wait until ratification kasi late na iyan (because it would be too late.)”

For Azcuna, there is a need to monitor the transitory provisions.