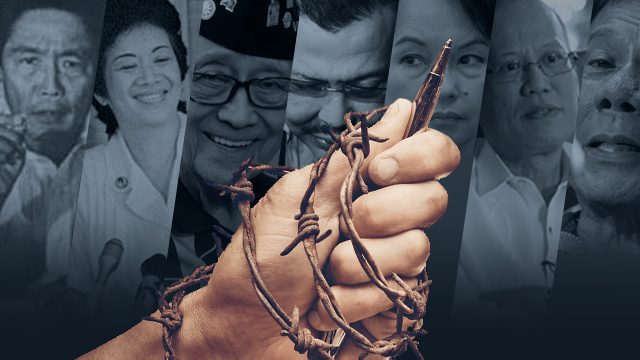 Facebook Twitter Copy URL
Copied
Press freedom is a continuous battle in the Philippines. The recent move of the administration of President Rodrigo Duterte is one of the worst against the media since Martial Law.

MANILA, Philippines – More than 3 decades after Filipinos reinstated democracy, press freedom is once again under siege in the Philippines.

On Monday, January 15, the Securities and Exchange Commission (SEC) revoked the registration of Rappler for allegedly violating the Constitution and the Anti-Dummy Law – a move seen as nothing short of harassment aimed at stifling media in the country.

Seen as an extension of various threats by President Rodrigo Duterte against media organizations, this action by the administration will surely just be the beginning.

It is also one of the worst moves against the media since the declaration of martial law by the dictator Ferdinand Marcos. But what did each administration do that threatened press freedom? Press freedom was one of the main victims when the Philippines was placed under Martial Law by then president Ferdinand Marcos in September 1972. The dictator, fearing the power of the media, made sure that his dictatorial government had full control over all news agencies. (READ: Marcos’ Martial Law orders)

After signing Proclamation No. 1081, Marcos released Letter of Instruction No. 1 which ordered the “takeover and control” of all newspapers, magazines, and radio and television facilities.

Among media outlets in the country affected were the Manila Daily Bulletin, ABS-CBN, the Manila Times, Philippine Free Press, Philippine Graphic, and the Daily Mirror, among others.

Marcos justified the order by saying that it was meant to “prevent the use of privately-owned newspapers, magazines, radio and television facilities, and all other media of communications for propaganda purposes against the government.”

Aside from this, through his various Presidential Decrees, he penalized the printing of materials that “can undermine integrity of the government” and cancelled franchises and permits of media facilities.

Information relayed to the public were highly censored and subject to approval by a government body. Those who refused to go through the process – or were deemed to have published or written materials subversive to the government – were arrested and denied due process. The People Power Revolution of 1986 toppled the Marcos dictatorship and made Corazon Aquino – the widow of opposition figure Benigno Aquino Jr – president.

Under her administration, jumpstarted by the formulation of the 1987 Philippine Constitution, the freedoms previously taken away by Marcos were reinstated.

But the years after the reinstatement of democracy were marred by plots to overthrow the Aquino administration. These actions were spearheaded by members of the military. The way the government handled these attempts were also heavily criticized.

According to the Reporters Without Borders, in dealing with the media, Aquino was “uncomfortable with it but managed to deal with it conscious of the vital role of media in a democracy.”

She, however, filed a libel case against journalist Luis Beltran over his column that said Aquino hid under the bed during one mutiny in August 1987. The National Telecommunications Council, in 1989, also ordered the closure of two radio stations for airing “rebel propaganda” but the orders were eventually lifted the same month.

At least 21 journalists were killed under her administration, according to data from the Center for Media Freedom and Responsibility (CMFR). Reporters Without Borders also said that the administration of Fidel V. Ramos recognized the role of the media in pursuing and upholding democracy.

However, CMFR monitoring showed that at least 11 members of the media were killed under the Ramos administration. While Aquino and Ramos had amicable relations with the media, Reporters Without Borders described Joseph Ejercito Estrada as “less tolerant.” He, after all, used his influence to put pressure on several media outlets deemed critical of him and his administration.

In 1999, the Philippine Daily Inquirer (PDI) saw itself at the receiving end of pressure when it was openly criticized by Estrada for alleged bias.

Advertisers, prompted by the President, withdrew from the country’s largest broadsheet. In a report by the Committee to Protect Journalists (CPJ), the Inquirer told the media watchdog that 3 government-run corporations, also withdrew their advertising.

More than a decade later in 2011, Estrada apologized to the newspaper.

While the Inquirer “survived” the ad boycott, things were much worse for the Manila Times which was hit by Estrada over a story which described him as an “unwitting ninong (godfather)” to a government contract.

The story, written by business reporter Joel Gaborni, was published on February 16, 1999. Less than a month after, on March 9, Estrada filed a P100-million libel suit against the newspaper claiming that it was an attack against “reputation, honor, and dignity” and “honesty and integrity as a public official.”

Under pressure from the former president, on April 8, the Gokongwei family, then owners of The Manila Times, ran a front-page apology to Estrada. That apology triggered the resignation of senior editors and writers and sparked media debate on press freedom.

Estrada withdrew the libel charge against the newspaper yet continued government pressure on the Gokongweis. The family eventually sold the newspaper to Katrina Legarda and Reghis Romero, who only served as a front for Estrada crony Mark Jimenez.

On July 23, 1999, The Manila Times printed its last issue under the Gokongwei family. The new owners resumed operations a few months after. The administration of Gloria Macapagal Arroyo was marred by libel suits, a raid, and the single deadliest attack against the media. (READ: Arroyo’s Fortress and the Nosy Press)

Meanwhile, then first gentleman Jose Miguel Arroyo actively filed libel suits against the press over articles linking him to alleged wrongdoing. He filed a total of 50 cases against 46 journalists, according to the Philippine Center for Investigative Journalism.

In fact, in November 2006, then Malacañang reporter (and now Rappler editor) Mia Gonzales was nearly arrested while inside the Palace grounds in relation to a libel case filed by Arroyo against her over a 2004 Newsbreak report.

Not taking the threats sitting down, journalists – from Newsbreak, the Philippine Daily Inquirer, Malaya, and the Daily Tribune – filed a class civil suit amounting to P12.5 million against Arroyo. The libel cases, they said, created a “chilling effect” on the Philippine press.

The move by the presidential spouse who had been in the middle of controversies relating to corruption and use of influence was condemned by local and international rights groups.

In 2007, Arroyo dropped all libel cases.

The Daily Tribune was also subjected to harassment when in February 2006, the police raided its office after alleging that it was a “possible source of destablization materials.” The Supreme Court, in May 2006, declared the raid “plain censorship.”

The end of 2009 was a terrible year for press freedom when the single deadliest attack against the media happened when 32 journalists among the 58 killed in a massacre in Ampatuan, Maguindanao province. They were attacked, brutally killed, and buried using a government-owned backhoe.

The powerful Ampatuan clan – ally of the Arroyo administration – was believed to have plotted the massacre to derail the candidacy of political rival Esmael “Toto” Mangudadatu in the 2010 gubernatorial elections.

More than 8 years later, none of the 188 accused have been convicted. (READ: What has happened to the Maguindanao massacre trial 8 years later?)

Many groups refer to the Arroyo administration as the period when media killings peaked post-Marcos. Data from CMFR shows that 83 media workers were killed from 2001 to 2010. While there was no concrete policy or action against the media, then president Benigno Aquino III was known for his constant appeals to the press for “balanced” reporting.

In an exclusive interview with Rappler in July 2017, Aquino said that he wanted to control the media “in all honesty” but instead of a clampdown, his administration instead repeatedly “appealed” for fairer media coverage. His appeals, he said, led to nothing.

The problem, however, lies in the huge number of journalists killed under his administration.

At least 31 members of the press were killed during the Aquino presidency – 2nd to Arroyo in terms of magnitude post-Marcos – according to data from the CMFR. Even before President Duterte took his oath of office in 2016, he was known to have a “colorful” relationship with the media.

In a press conference in May 2016, he said that journalists are legitimate targets of assassination “if you’re a son of a bitch.”

“Just because you’re a journalist you are not exempted from assassination, if you’re a son of a bitch,” Duterte said when asked how he would address the problem of media killings in the Philippines.

That was just the start of his tirades against the media. Barely two years into his presidency, Duterte and his government have continuously threatened, harassed, and made antagonists out of several media outlets.

In March 2017, Duterte called certain media entities “bastos” (rude) for writing supposedly unfair news about him and his administration.

In a thinly veiled threat, the President said that karma is sure to catch up with newspaper Philippine Daily Inquirer and television network ABS-CBN and their owners, the Prietos and Lopezes, respectively. (READ: Duterte tells ‘rude’ media: Beware of ‘karma’)

These threats continued in the next months.

In April 2017, Duterte said that he wants to block the renewal of ABS-CBN’s franchise, further accusing the network of “swindling” after it did not show his already paid political ads during the 2016 campaign season. (READ: Duterte’s ace against ABS-CBN, the Philippines’ biggest network)

In July 2017, Duterte turned his ire on the Inquirer and threatened to do an “exposé” against the country’s largest broadsheet. He accused the owners of not paying the correct taxes for their Mile Long property. He also tried to link an ex-official with a huge salary to the Inquirer.

The same month, after being at the receiving end of threats, the Prieto family announced it was in talks with Ramon Ang, head of San Miguel Corporation, for the sale of its majority stake in the Inquirer. Ang was also described by Duterte as his friend.

The move, according to the family, was a “strategic decision” but insiders said it was due to continued harassment and pressure.

During his second State of the Nation Address (SONA) in July 2017, Duterte claimed that social news site Rappler is “fully owned” by Americans, warning the company that this violates the 1987 Constitution.

This claim reflects the disinformation directed by pro-Duterte bloggers and various allies of the administration against Rappler even during the election period. The news outlet has consistently debunked this claim. (READ: Debunking lies about Rappler)

Almost 6 months after, the Securities and Exchange Commission (SEC) revoked Rappler’s registration for allegedly violating the Constitution and the Anti-Dummy Law.

This move is nothing short of harassment aimed at stifling press freedom in the Philippines. On December 14, 2016, the Office of the Solicitor General wrote the SEC, asking it to investigate Rappler over its Philippine Depositary Receipts (PDRs).

Rappler, however, assured its readers that it will continue to operate as it files the necessary motions for reconsideration with the courts. (READ Rappler’s statement: Stand with Rappler, defend press freedom)

Several organizations – both local and international – have called out this action as an act against press freedom.

Meanwhile, according to data from the CMFR, 4 journalists have been killed so far under the Duterte administration. This is only a part of a huge culture of impunity dominating the Philippines. – Rappler.com

Photos from Agence France-Presse, The Official Gazette, and Rappler files