Mar 6, 2018 10:00 AM PHT
Jodesz Gavilan
Facebook Twitter Copy URL
Copied
Requests for documents related to the government's anti-drug campaign by various local bodies were mostly rejected and the reasons cited – if their letters were even given a reply at all – all point towards protecting national security 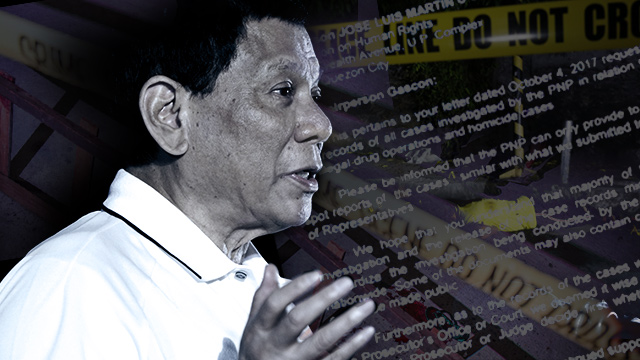 MANILA, Philippines – It took a Supreme Court order for the administration of President Rodrigo Duterte to signify intent to finally provide documents on drug war deaths.

Prior to this, the government had been uncooperative with bodies that want to probe into drug war deaths, contrary to claims of being transparent and open to investigations.

Most of the requests by various local bodies for documents related to the government’s anti-illegal drug campaign were rejected owing to reasons related to national security. In some cases, letters did not even get any replies.

In fact, last March, Philippine National Police (PNP) chief Ronald dela Rosa even said that all requests for documents must go through Duterte.

This should not be the case as most requesting bodies are mandated to investigate and should be granted. Some documents, such as spot reports, are also considered public, and should therefore be easily accessible.

The past two years, however, have shown otherwise. When were the instances that the government refused to give in to requests for drug war documents?

Solicitor General Jose Calida initiall refused to give full documentation of the drug war deaths to the Supreme Court (SC) – even asking the High Court, through a motion for reconsideration filed in December 2017, to recall the order given to him.

The motion for reconsideration came after he initially responded positively to the verbal order by Senior Associate Justice Antonio Carpio during oral arguments on the drug war in December 2017. The order would have tested the government’s claim that it is investigating each death recorded under the drug war.

The documents requested in the SC order included drug watchlists, lists of warrantless arrests, or copies of the warrants of arrest, pre- and post-operation reports that involved death, and documents related to other petitions.

Calida, in his motion, said that the documents that were requested contained sensitive information that “in the long run will have undeniable effect on national security.”

“It could spell the success or failure of follow-up operations of police and other law enforcement bodies, aside from endangering the lives of those on the list as well as those already in custody,” he said.

But on Tuesday, April 3, the SC en banc denied his appeal and compelleged the government to provide to the SC full documentation of the 3,000 deaths that arose from legitimate police anti-drug operations.

Malacañang on Wednesday, April 4, said it will comply with the SC order.

2. The Commission on Human Rights

Requests for case documents lodged by the Commission on Human Rights were perhaps the most rejected by the PNP.

Since the start of the Duterte administration, the Commission has repeatedly tried to reach out to policemen for documentation that can aid them in their own investigations as mandated by the 1987 Philippine Constitution. (READ: Accountability and human rights: The role of the CHR)

They were initially only provided a “matrix” or lists from the police force which was inadequate for their probes, according to CHR Commissioner Gwendolyn Pimentel-Gana during a Senate hearing in August 2017. They also failed to offer more cooperation in investigations. (READ: ‘Puro dribble’: CHR hits PNP for not cooperating in drug war probes)

But in September 2017, then interior undersecretary (and current Dangerous Drugs Board Chair) Catalino Cuy said that Duterte ordered the police to not share case folders with the CHR.

LOOK: Latest reply from PNP chief Director General Ronald dela Rosa states that the police can only give spot reports to the Commission on Human Rights. The release of case records “might prejudice, preempt, or jeopardize” ongoing investigations, he said. @rapplerdotcom pic.twitter.com/NfWBpjGPNG

In a letter in November 2017, Dela Rosa also told the CHR that they can only provide spot reports and not the requested case records because the release could “prejudice, preempt, or jeopardize” the investigations conducted by policemen.

Gascon, however, said that as of March 5, the Commission has yet to receive even the spot reports mentioned by Dela Rosa.

“Even the spot reports they said would be made available have not been fully given to us after our task force had requested for them,” he told Rappler.

Magdalo Representative Gary Alejano, however, said that some PNP regional offices were able to provide spot reports to the House of Representatives.

3. Integrated Bar of the Philippines

The Integrated Bar of the Philippines (IBP) filed administrative and criminal complaints in September 2017 against policemen involved in the killing of teenager Kian delos Santos.

According to IBP national president Abdiel Fajardo, the organization had a hard time obtaining documents from the PNP that they needed to aid their investigation.

After sending letters requesting information from at least 20 police stations, Fajardo said that they were only referred to higher-ups. The PNP leadership, however, failed to respond to the IBP’s request.

If the police operations conducted against suspected drug personalities were legitimate, Fajardo said that providing documents and other pertinent information to bodies that seek to investigate should not be a hard task for the PNP.

“You must realize that if these were indeed legitimate police operations, there must be a record from the very beginning up to the end, and up to the actual investigation because it’s par for the course,” he explained in a previous Rappler Talk. “If they cannot produce it, then there must be something wrong.”

Rejecting requests does not make the government look good.

“There’s presumption in law that when evidence is suppressed, that’s not favorable,” Fajardo said.

The above-mentioned rejections are in line with the dominant stance of Duterte against any probes into his drug war. In fact, on March 1, Duterte ordered the PNP to ignore the United Nations rapporteurs who will be sent to investigate human rights abuses under his administration, adding that they have no right to “interfere in the way I would run my country.”

According to Human Rights Watch (HRW), blatantly telling state actors to ignore independent probes reflect badly on the administration and its stand for justice.

“It’s not only a bad reflection on the administration as it affirms what we and others have been saying all along: That the war on drugs is a state policy of widespread murder that can now be considered a crime against humanity,” HRW Asia Division’s Carlos Conde told Rappler.

“This is consistent with his previous pronouncements and actions to frustrate the quest for justice and accountability for these killings,” he added. – Rappler.com