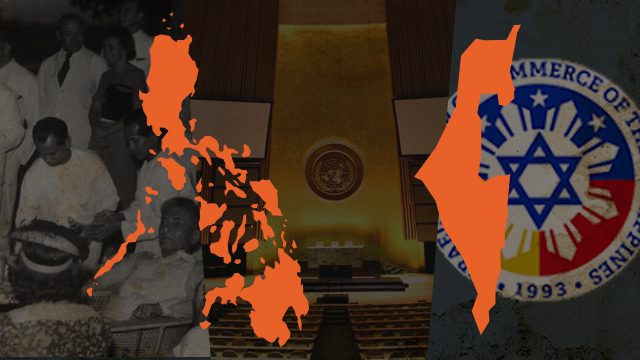 MANILA, Philippines – The State of Israel and the Republic of the Philippines both share a deep history as allied countries.

On February 26, 1958, Israel and Philippines signed the Treaty of Friendship in the spirit of “perpetual peace and firm and lasting friendship,” following several events prior to the signing that helped boost the connection between the two nations.

Relations between the two countries were further solidified as President Rodrigo Duterte made an official state visit to Israel and Jordan last Sunday, September 2.

The visit marked the first time a sitting Philippine president has ever set foot in both countries. The Philippines was one of the few countries which opened its doors to refugees when the anti-semitic National Socialist German Workers’ Party propaganda led by Adolf Hitler put millions of Jews in concentration camps in the 1930s.

Under the leadership of President Manuel Quezon, the government implemented the “open-door policy,” which transformed Manila into a safe haven for refugees as it granted visas to Jews escaping the Nazi regime.

The Philippines has welcomed up to over 1,200 Jewish refugees, also known as the “Manilaners”, who fled during the Holocaust. (READ: Duterte, dubbed ‘Hitler admirer,’ visits Israel Holocaust memorial)

To this day, Filipinos continue to reap the fruits of extending help towards the Jews. Israel has granted visa-free entry valid for 90 days for Filipino tourists since 1969.

Ally for creation of Israel

In 1947, the United Nations General Assembly proposed Resolution 181 on the partition of Palestine and the creation of the State of Israel.

The resolution sought to address the conflicting ideals and claims between nationalist movements of Jews and Palestinians.

Out of 33 countries that voted in favor for the establishment of the State of Israel, the Philippines was the only Asian country who voted for the resolution.

The approval of the resolution also facilitated the establishment of full diplomatic relations between the Philippines and Israel, and the opening of respective embassies in Tel-Aviv and Manila in 1962.

Excluding recently pronounced agreements, the Israel Chamber of Commerce of the Philippines lists 14 major bilateral agreements between the two countries.

Both countries also engage in trade exports and imports, with products of electronics, industrial materials and machineries topping the list.

Israel also benefits from Philippine overseas workers, primarily within the area of caregiving. The number of Filipino care workers working in Israel in the 1980s reached a high of 100,000, or about 7% of the Israeli work force.

In an interview with the Manila Bulletin, Philippine Ambassador to Israel Nathaniel Imperial said that 24,000 out of 29,000 Filipino workers currently in the country are caregivers.

“I am one of those families, Mr. President. My late father, who died at the age of 102, in his later years received incredible care by a caregiver from the Philippines, Lee, a woman of exceptional compassion and intelligence,” Netanyahu said.

“I, like many, many Israeli families, am deeply moved by this show of humanity,” he added.

With the recent visit of President Duterte, relations between Israel and the Philippines are expected to tighten further. –Rappler.com