Facebook Twitter Copy URL
Copied
According to PAGASA, Typhoon Ompong may potentially become a super typhoon. Here's how it compares to previous destructive typhoons that hit the country.

MANILA, Philippines – Typhoon Ompong (Mangkhut) threatens to ravage areas in Northern Luzon, as it picks up speed with maximum winds of 205 km/h as of Friday evening, September 14.

Ompong is expected to make landfall around the Cagayan-Isabela area early Saturday morning, September 15, possibly between 1 am to 3 am.

While Ompong has not yet been classified as a super typhoon, the Philippine Atmospheric, Geophysical, and Astronomical Services Administration (PAGASA) said that it may still strengthen into one, if its wind speeds hit 220 km/h.

This puts Ompong near the likes of other super typhoons like Yolanda (Haiyan) in 2013 and Lawin (Haima) in 2016, which affected millions of individuals and damaged billions worth of properties.

At least 5.2 million people are projected to be affected by the typhoon, with around 983,100 living below the poverty line, according to the National Disaster Risk Reduction and Management Council.

Exactly how strong is Typhoon Ompong? Here is a look at various indicators to compare Ompong with other strong typhoons in Philippine history. 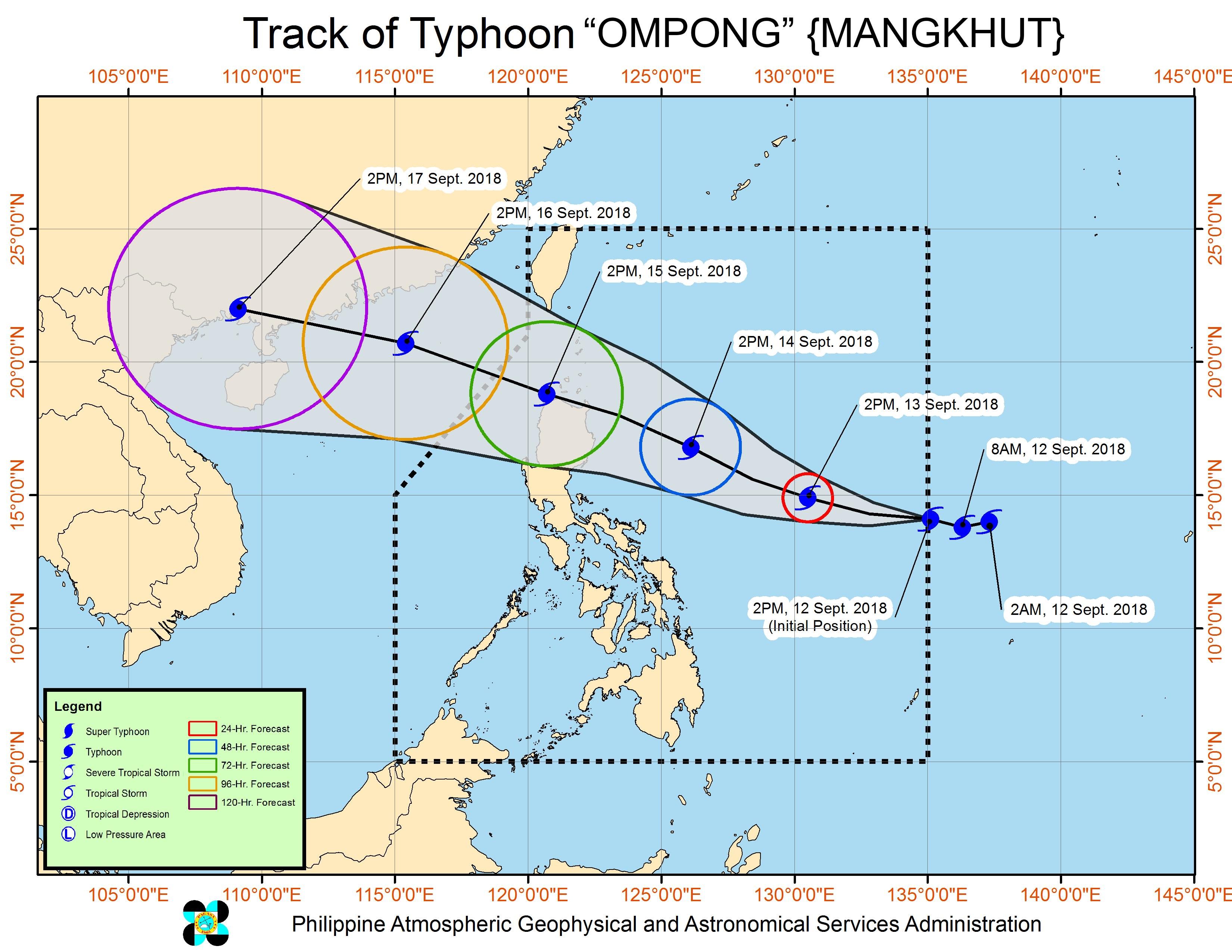 Ompong maintains its direction towards the northern part of Luzon, particularly in the Cagayan-Isabela area. It takes a slightly similar path to Super Typhoon Lawin that hit land in Cagayan, but headed more toward its southern areas.

Other deadly typhoons that hit the same area in previous years were Pepeng (Parma) in 2009 with sustained winds of 120 km/h, and Mina (Nanmadol) in 2011 with maximum winds of 195 km/h.

Both Pepeng and Mina triggered several landslides and floods across the region. Ompong currently has maximum winds of 205 km/h and gustiness of 255 km/h. It is presently far weaker than other destructive typhoons that hit land in the country.

Ompong’s strength is more reminiscent of the following typhoons:

They were all classified as Category 3 under the Saffir-Simpson Hurricane Wind Scale for having recorded maximum winds of 178–208 km/h upon entry to the Philippine Area of Responsibility.

While these tropical storms were not super typhoons, some were still considered to be among the Philippines’ most destructive typhoons.

Glenda, which reached maximum sustained winds of 140 km/h near the center and gusts of up to 170 km/h, battered Southern Luzon. It resulted in the death of 106 people and incurred damages of up to about P31.6 billion.

Pedring reached wind speeds of 194 km/h when it lashed Luzon in September 2011. Damaged properties amounted to about P15 billion.

As of 6 pm Friday Ompong has a vast diameter of 900 kilometers. Thus strong winds and heavy rain were felt in provinces all over Luzon. In terms of diameter, Ompong measures wider than most super typhoons, including Yolanda, which had a diameter of 600 kilometers.

Ompong is significantly bigger than Super Typhoon Yolanda which left a trail of destruction across Eastern Visayas in 2013.

It is also 100 km wider in diameter than Lawin, to which PAGASA has compared the current typhoon, as they both share similarities in strength and direction. (READ: Will Typhoon Ompong be the same as Super Typhoon Lawin?)

According to PAGASA reports, storm surges brought by Ompong are expected to measure up to 6 meters or 19 feet high.

Ompong’s storm surge numbers are at par with Typhoon Yolanda, which generated storm surges between 4 to 6 meters, or 13 to 19 feet.

This is significantly higher than anticipated storm surge heights under Typhoon Lawin in 2015 at only two meters (6 feet, 5 inches high), according to Project NOAH. – Rappler.com