What you need to know about DepEd’s foreign language electives MANILA, Philippines – The Department of Education on Sunday, November 18, clarified that the Korean language will be taught only as an elective.

The clarification was made amid confusion that it would replace the Filipino subject previously required in schools.

The clarification also came after the Supreme Court’s decision that lifted a 2015 temporary restraining order on a higher education directive removing Filipino and Panitikan as required subjects in college.

But according to DepEd, the basic education curriculum indeed will still put a premium on the Philippine national language by “continuously strengthening the teaching and learning of Filipino as part of the K to 12 Program.”

At the same time, the education department is currently implementing the Special Program in Foreign Language (SPFL) classes in public schools. So what is this about?

What is the Special Program in Foreign Language?

The Special Program in Foreign Language, according to DepEd, “helps learners develop skills in listening, reading, writing, speaking, and viewing that are fundamental in acquiring communicative competence in a second foreign language.”

It’s a long-running program by DepEd, first implemented in select schools in 2009 and which initially only offered Spanish. Since then, the program expanded to include Nihongo, French, German, Mandarin, and the latest in 2017, Korean.

DepEd added that the program “aims to enhance the ability of learners to engage in meaningful interaction in a linguistically and culturally diverse global workplace.”

Who are these classes for?

SPFL classes are open to Grade 7 to 12 students.

What is important to note is that it is considered only an elective, meaning it is not mandatory and does not replace Filipino as subject.

The classes are only encouraged and recommended to those who have shown English competence based on their National Achievement Test (NAT) results. Students will also be assessed if they are “capable of learning another foreign language.”

According to DepEd in 2017, each foreign language class is allotted 4 hours per week “as an additional subject.”

Data from the education department also shows that there are at least 10,526 SPFL students across the Philippines. 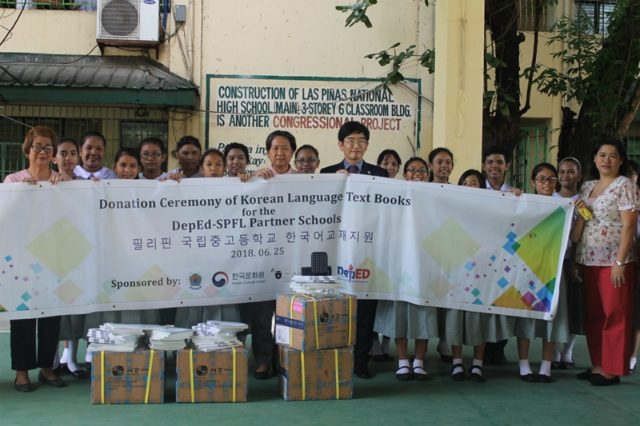 Who are teaching these electives?

Teachers and volunteer teachers are the ones responsible for leading foreign language classes.

Since the program was first implemented, DepEd has partnered with several institutes to help train teachers in a specific foreign language they are supposed to teach. These organizations include:

In fact, Takahiro Matsui, one of the creators of the manga series Jose Rizal, oversaw the teaching of Nihongo in public high schools in Central Visayas. He said it was the time when his interest in the Filipino hero caught his interest. (READ: Manga creators: Jose Rizal more than a Filipino hero)

Won’t the existence of foreign language electives set aside Filipino and other Philippine languages?

While the fate of the Filipino subject at the tertiary level is in limbo following the SC decision, DepEd remains firm that its place in the basic education curriculum is secure.

According to Education Secretary Leonor Briones, the subject Filipino “remains to be among the core subjects in basic education while the teaching of Panitikan in the Filipino subject serves as a springboard for discussion of grammar lessons and a way of strengthening the Filipino identity and culture.”

The 1987 Philippine Constitution also says that the “government shall take steps to initiate and sustain the use of Filipino as a medium of official communication and as language of instruction in the educational system.”

There is also the Mother Tongue-Based-Multilingual Education (MTB-MLE) which is part of the K to 12 basic education program for Kindergarten, Grades 1, 2, and 3. Under this, 8 major languages in the Philippines are offered as learning area and languages of instruction. – Rappler.com