Facebook Twitter Copy URL
Copied
The Cathedral of Our Lady of Mount Carmel in Jolo, Sulu, has been the target of many attacks through the years

MANILA, Philippines – The explosions that rocked the Cathedral of Our Lady of Mount Carmel on Sunday, January 27, are the latest attacks against the church in Jolo, Sulu.

Since 2000, there have been at least 10 attacks directly against or near the cathedral, Rappler’s research showed. Many of these were allegedly perpetrated by the Abu Sayyaf Group.

A grenade is thrown at the cathedral. The attack comes amid negotiations for the release of hostages taken by the terrorist group in Mindanao.

The terrorist group initially targets the Jolo Cathedral but eventually bombs the nearby multipurpose cooperative building. A Philippine Star report quoted police investigators as saying that the plan shifted because the store “serves both as a religious and commercial target.”

The blast leaves at least 5 dead and 17 wounded. A improvised explosive device (IED) detonates in front of a shop just 100 meters away from the cathedral, killing at least 6 people and injuring 40.

Authorities also discover at least two other IEDs within the area lodged inside a motorcycle parked 100 meters from the cathedral.

The blast is one of at least 4 that rocked Mindanao within a 12-hour period, according to a report by the Philippine Daily Inquirer.

A grenade explodes just outside the cathedral before the lunch time rush. No one is injured in the attack, which leaves damaged properties.

A grenade explodes in front of the cathedral late night on New Year’s Eve, wounding a soldier.

A grenade explodes just outside the church wall early Sunday morning, 20 minutes before the day’s first Mass. No casualties were reported.

According to witnesses, as quoted by the Catholic News Agency, an unidentified man threw the grenade at the tombs of late bishops Francis Joseph McSorley and Benjamin de Jesus.

A grenade explodes in a public plaza in front of the cathedral, damaging its gate. No injuries are recorded.

A grenade lands and explodes on the roof of the cathedral but leaves no casualties.

A grenade explodes outside the Jolo Cathedral, leaving at least one injured. 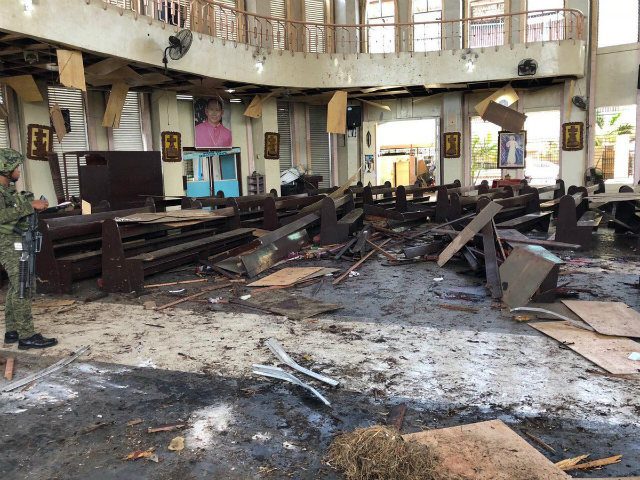 Twin bombings rock the Cathedral of Our Lady of Mount Carmel. At least 21 people are killed and more than a hundred others injured.

Western Mindanao Command chief Arnel dela Vega says the primary suspect behind the bombing is still the terrorist Abu Sayyaf Group based on previous threats, but this is subject to “further assessment and validation.” – Rappler.com