EXPLAINER: When should one get vaccinated against measles? MANILA, Philippines – Among the top reasons behind the huge increase in measles cases in the country is parents’ hesitation to have their children vaccinated, the Department of Health (DOH) said on Monday, February 11.

“Loss of public confidence and trust in vaccines in the immunization program brought about by the Dengvaxia controversy has been documented as one of the many factors that contributed to vaccine hesitancy in the country,” Duque said.

The next leading cause of low vaccination coverage was lack of time to have children vaccinated.

This has led to a rise in measles cases, with 4,302 verified cases recorded all over the Philippines as of Sunday, February 10. Data from the DOH’s epidemiology bureau likewise showed there were at least 70 deaths due to the disease as of Monday, February 11.

Of the 70 deaths, Duque said 79% or almost 8 out of 10 individuals did not have any history of being vaccinated against measles. Vaccines have been proven to be the best defense against the highly contagious disease.

WATCH: Duque says hesitation of parents to vaccinate their children is mainly due to the Dengvaxia scare. Parents’ lack of time to have kids is the second reason for rise in unvaccinated children @rapplerdotcom pic.twitter.com/uBccCoV0Oo

With outbreaks declared in Metro Manila, Central Visayas, Western Visayas, and other parts of Luzon, the DOH urged the public to get the vaccine against measles to protect themselves and others.

But when should children be vaccinated? Is it safe to get a measles vaccine even when you’re an adult? Read this quick explainer.

Are measles vaccines safe? The DOH, along with health professionals, advocate vaccination for children because it has long been proven to be effective. Years of scientific research have shown it is the best defense against the disease.

This is because it builds immunity against a specific disease by exposing an individual to a weakened version of a virus so that the body can build resistance to it. This means the next time an individual comes into contact with the virus, his or her body will know how to protect itself. When should one get vaccinated against measles? Medical experts suggest giving infants the first dose of measles vaccination at 9 months. This should be followed by a second dose at 12 months old.

Scientific research has shown that this is the age among infants when the vaccine is most effective. Administering the measles vaccine at 9 and 12 months old has been proven to result in seroconversion among 85% to 90% of patients, respectively. Seroconversion is the portion of people who develop protective antibodies against the measles virus after being vaccinated.

If infants as young as 6 months old are given the vaccine, seroconversion is pegged at only half (50%) of those who get the vaccine.

In an outbreak situation, though, health workers immunize infants as young as 6 months old to protect children.

But DOH Expanded Immunization Program head Wilda Silva said infants as young as 6 months old who receive the vaccine will still be considered as an individual with “zero dose.”

This means that at 9 months, infants should receive another measles shot, and again at 12 months.

“We give the first dose at 9 months because very young babies [at 6 months] when given a measles shot, only 50% will be protected from measles because their immune system is not yet mature,” Silva said in an interview with Rappler on Monday.

EARLIER. Duque gives measles vaccines to babies at least 6 months old. The DOH says babies 1-5 months old should be isolated if measles suspected as they are too young to be vaccinated. Duque assures it is safe and the body will naturally combat measles at this age @rapplerdotcom pic.twitter.com/4Kg0DXFDVc

What about children 5 months old and below? Duque said children in this age bracket should be isolated if suspected of having measles, as they are too young to receive the vaccine.

Duque gave assurances this was safe, as the body will naturally fight the virus. As a protective measure, infants should also be isolated if staying in an area where measles cases are known to exist.

“It is contra-indicated when you have an ongoing infection, like for example, you are sick [with] pneumonia – it means your resistance has gone down also because you contracted the disease – whatever disease that is,” Silva said.

The body needs to be healthy enough to build resistance against the weakened virus in a vaccine.

The World Health Organization said pregnant women, people living with HIV, and those with serious illnesses should also avoid the vaccine. 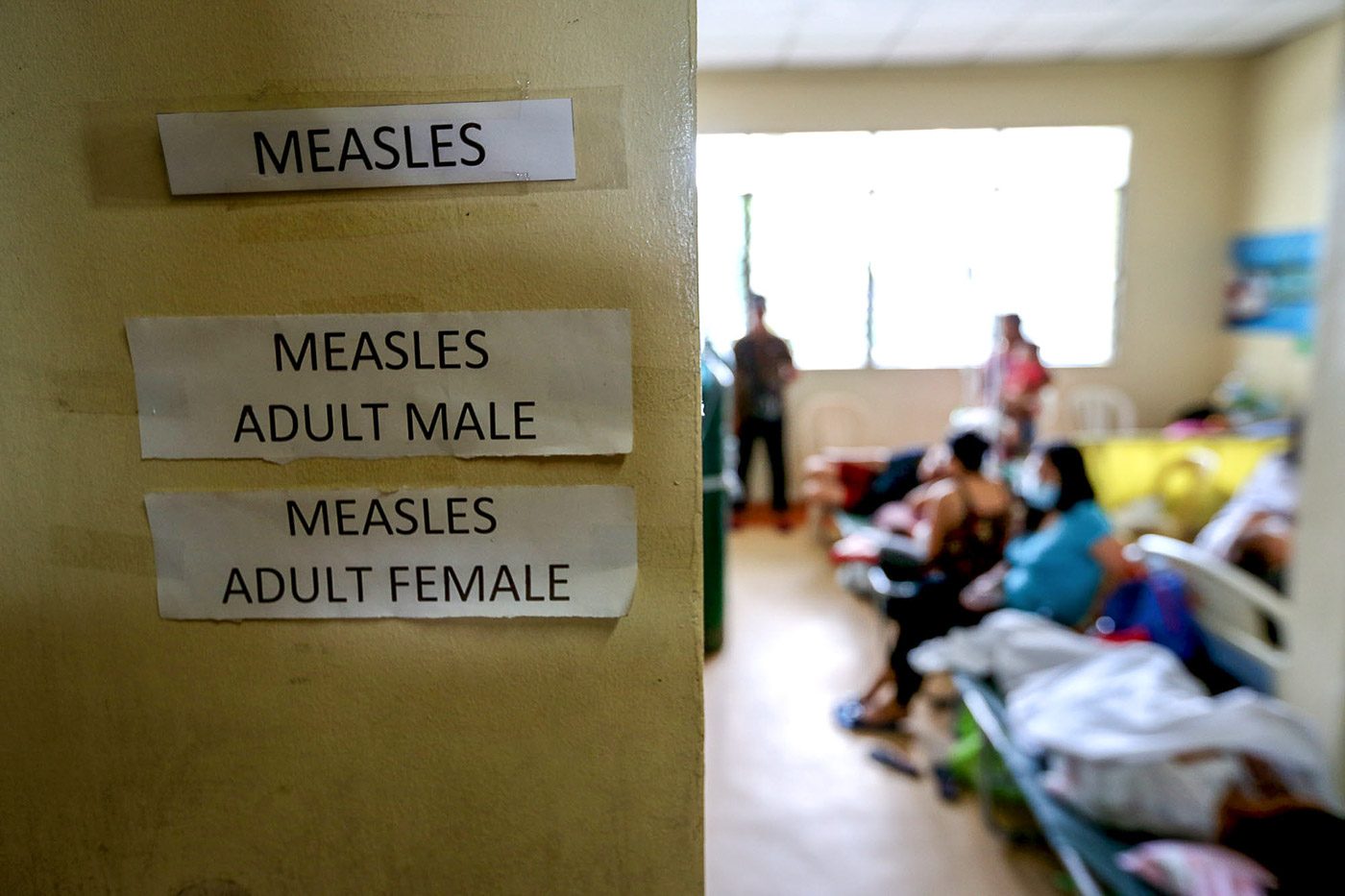 Can one get vaccinated against measles as an adolescent or adult? Measles vaccination is safe and effective for adults, Silva said.

Medical experts suggest getting vaccinated if one has never gotten immunized against measles.

In the event of an outbreak, the DOH said those without immunity against measles should also get vaccinated.

Duque and Silva assured the public that while children will be prioritized, there is enough supply of measles vaccines to respond to the outgoing outbreak. – Rappler.com