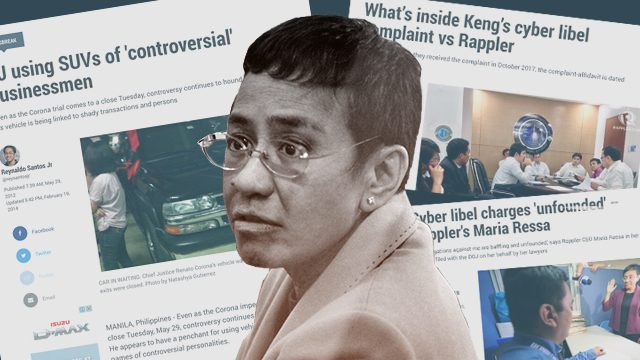 The case stemmed from a 7-year-old story that was published before the cybercrime law took effect. Several groups slammed the arrest as an attack against the press amid seeping threats to democratic institutions in the Philippines.

What happened to this case? Here’s a rundown of events leading up to the guilty verdict.

The article in question is published. The story says that former chief justice Renato Corona used a vehicle registered under the name of businessman Wilfredo Keng, who, based on previously published stories and intelligence reports, had alleged links to illegal drugs and human trafficking.

Republic Act (RA) No. 10175 or the Cybercrime Prevention Act of 2012 is signed into law. Lawyers and media organizations decry its ambiguities and the power it affords the justice department. It gives the department the power to shut down a website on the basis of prima facie evidence. A temporary restraining order is issued against it after a total of 15 petitions are filed questioning the law’s constitutionality, among other things.

Two years later, the SC upholds as constitutional most of the provisions of RA 10175, including cyber libel, but only in cases where it covers persons other than the original author. It also strikes down a provision that allows the justice department to take down online content without a court warrant.

The investigative report is updated. Changes include correction to a wrong spelling of the word “evasion” and modifications to the URL of images.

Through his lawyer, Keng reaches out to Rappler about the story. Part of Keng’s defense is a 2016 certification from an officer of the Philippine Drug Enforcement Agency (PDEA) clearing him of illegal drug involvement.

Keng files a libel complaint with the National Bureau of Investigation’s (NBI) cybercrime division. He claims that “the article was published by Rappler without observing the ethical standards of journalism. It contained malicious imputations of crimes, with bad intentions, purposely to malign, dishonor and discredit my character and good reputation.” (READ: What’s inside Keng’s cyber libel complaint vs Rappler)

The counter-affidavits also argue that online libel “is not a new crime” and is the same as the old crime of libel in the 1930 Revised Penal Code (RPC). Article 90 of the RPC extinguishes criminal liability within one year.

Keng, according to an Inquirer report, files a supplemental affidavit saying “the prescriptive period for crimes falling under Section 4(c) (4) [of the Cybercrime Prevention Act of 2012] is 15 years” and not one year.

The NBI recommends to the Department of Justice on March 1 that Rappler be prosecuted for cyber libel, reversing its earlier dismissal of the complaint. It argues that the earlier dismissal was “prematurely disclosed.” The DOJ receives the referral on March 2.

NBI chief Dante Gierran denies that there was a reversal, saying, “I discovered recently that the interview with the chief of the Cybercrime Division was only a casual giving of information on a matter that was not yet terminated. It was not yet finished.” (READ: Rappler to NBI: Why revive case you already dismissed?)

Ressa submits a counter-affidavit to the justice department, saying that the allegations against her were “baffling and unfounded.” The counter-affidavit is filed through her lawyers, as she is in South Korea for a Reporters Without Borders (RSF) report on the state of global press freedom. Santos also submits his counter-affidavit.

The justice department recommends the filing of cyber libel charges against Ressa and Santos. (READ: Despite NBI flip-flop, DOJ to indict Rappler for cyber libel)

Rappler’s counsel, JJ Disini, says the resolution is dangerous for the media and bloggers.

“If the theory is that if a libelous article is published in the past, and continues to be accessible today, and that constitutes libel today, then no one is safe. Anyone that has a libelous article that continues to be accessible may be charged with libel, and, moving forward, this affects everyone, not just media, even bloggers,” according to Disini.

Agents and lawyers from the NBI cybercrime division descend on the Rappler headquarters to serve Ressa the arrest warrant. Several groups slam the arrest as an affront to press freedom.

Rappler, in a statement, says, “If this is another of several attempts to intimidate us, it will not succeed, as past attempts have shown. Maria Ressa and Rappler will continue to do our jobs as journalists. We will continue to tell the truth and report what we see and hear. We are first and foremost journalists, we are truthtellers.”

Ressa is detained at the NBI for the night after an effort to post bail is refused by Pasay Metropolitan Trial Court Executive Judge Allan Ariola, on the basis of jurisdiction concerns.

Manila RTC Branch 46 issues a release order for Ressa after bail of P100,000 is posted past noon.

Keng releases a statement saying: “… upon seeing the libelous article and prior to resorting to judicial remedies, I tried to formally and informally communicate with Rappler in order to have the said article taken down, clear my name and restore my reputation.”

Manila RTC Branch 46 junks the appeal, saying that the case “is well within the period of twelve (12) year negating the assertion raised by the Accused that the offense already prescribed.”

Ressa is arraigned for one count of cyber libel at the Manila RTC Branch 46.

Manila RTC Branch 46 grants a motion for leave to file demurrer to evidence, allowing Rappler and Ressa to seek an outright dismissal of their cyber libel case.

Rappler, Ressa, and Santos ask the court to dismiss the charges and acquit them, saying that the prosecution failed to prove its case after presenting “self-serving” witnesses and were also unable to prove “beyond reasonable doubt” that he has been defamed.

Manila RTC Branch 46 says it will hand down on April 3, 2020 its verdict on the cyber libel case against Rappler, its CEO Maria Ressa, and former researcher-writer Reynaldo Santos Jr. The order was received by Rappler on February 7.

In a notice received by Rappler lawyers, the court says “only counsels and parties to the case will be allowed inside the courtroom” to comply with safety protocols against the coronavirus.

The earlier schedule, April 3, was postponed due to the coronavirus pandemic.

Manila RTC Branch 46 finds Ressa and Santos guilty of cyber libel, sentencing them to 6 months and 1 day up to 6 years in jail. They are each ordered to pay P200,000 in moral damages and another P200,000 in exemplary damages.

Ressa and Santos are entitled to post-conviction bail while they go through legal remedies in higher courts. The conviction is appealable all the way to the Supreme Court.

Rappler says the Manila court’s ruling sets a dangerous precedent not only for journalists, but for everyone online. The decision further diminishes the space for free press, free speech, and free expression in the country. (READ: Rappler statement on cyber libel conviction: Failure of justice, failure of democracy)