Who’s who in the Bangsamoro Transition Authority 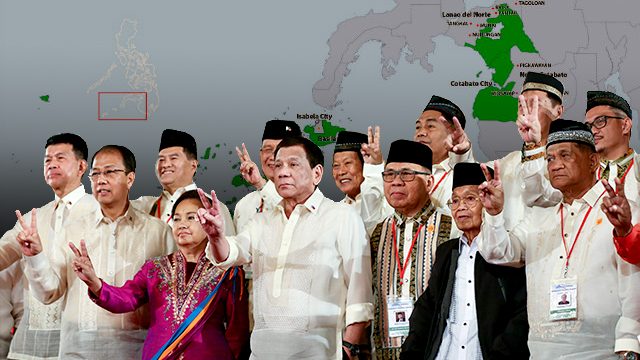 Facebook Twitter Copy URL
Copied
Let's take a look at the composition of the BTA: How many women and men? Which provinces do the members come from, and what are their areas of expertise?

MANILA, Philippines – The Bangsamoro Autonomous Region in Muslim Mindanao (BARMM) will be inaugurated on Friday, March 29, kickstarting the work of the newly-created Bangsamoro Transition Authority (BTA).

The Bangsamoro Parliament, composed of BTA members, also held its First Session on Friday, paving the way for the new region’s laws.

There are at present 75 BTA members, all appointed by President Rodrigo Duterte. They are led by Interim Chief Minister Murad Ebrahim (real name Ahod Balawag Ebrahim).

In this article, we break down the BTA’s composition, looking at how many women and men there are, the background and expertise of each member, and their places of origin.

We did not include in our breakdown the 24 former ARMM (Autonomous Region in Muslim Mindanao) officials automatically included in the BTA but who will be members only until June 30, when their terms end.

Here’s a quick look at our findings:

Hover over the human figures to see the number per gender.

Hover over the spots in the map to see the number of BTA members who come from the province.

Murad has also named the members of his Cabinet who are expected to take their oath this Friday, March 29.

On Friday, the BTA held its First Session as a Parliament where they elected the Parliament officers. They are the following:

What comes next?  Within the first 60 days after the BTA takes charge, Murad will need to submit a proposed transition plan, which will detail next steps as ARMM phases out to make way for BARMM.

The transition plan will contain an organizational plan and implementation schedule, which will then be reviewed and approved by the BTA as a whole. The BTA will have the task of delivering results that the Bangsamoro people expect from the BOL: peace and security, reduced poverty, development of business and jobs, and stability among ethnic clans and economic classes, among others.

What are some of the BTA’s priorities? The BTA will be in charge of governing the Bangsamoro region for the next 3 years.

Its first steps will include crafting laws that will serve as the foundation for its governance, namely administrative, local government, and electoral codes.

It needs to set up the BARMM bureaucracy, especially the line agencies that will be tasked with delivering basic services and implementing key programs – from critical infrastructure to protecting and using natural resources. The Chief Minister and his Cabinet will be in charge of executing laws and programs. The BTA, sitting as a Parliament, will exercise the legislative functions.

Also among the BTA’s 55 powers is the administration of its own justice system, raising of funds through tax collection, alteration of boundaries of municipalities and barangays, and development of culture and education. – Rappler.com