Youth and elections: Is there such a thing as a ‘youth vote’? 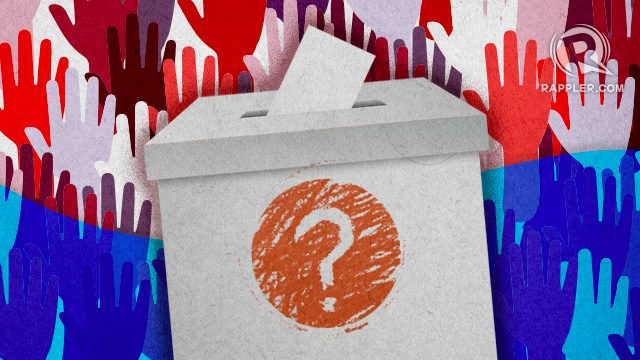 Facebook Twitter Copy URL
Copied
Among the important factors that shape the youth's attitudes on politics are education, religion, family, and class

How will this throng affect the 2019 midterm elections? Or do they care enough about elections to begin with?

The role of education

Ayen Lopez and Ron Reyes work for the Otso Diretso campaign. Lopez works in the communications team, Reyes as a volunteer recruitment officer. Both of them are idealistic, but both are aware of the challenges of campaigning.

With little funds and much work to do, both are admittedly tired but still energized. Gleaming, they spoke of grassroots organizing and alternative ways of campaigning. Both are young and have university degrees.

Aimee Bautista, an assistant professor at the University of the Philippines-Diliman Political Science department, said that university life is one of the main factors of youth politicization. Bautista has done research on youth perceptions of the Sangguniang Kabataan, as well as the likelihood of university students participating in electoral politics.

“We know that [many] college students move from provinces to Metro Manila to pursue tertiary education. During this period, ito yung panahon na malayo sila sa pamilya nila (during this period, they live far from their families),” she said.

“[The] university [becomes] the most influential agent. Initially, it would be the family, but with college life, mas nagiging malaki na ang impluwensiya ng unibersidad (the influence of university education becomes greater),” she added.

Other studies also seem to point to college education as an important factor in political and civic engagement. In a 2013 study by Willhelmina Cabo of the University of the Philippines (UP) National College of Public Administration and Governance, young university students were seen as politically active when encouraged to volunteer for campaign finance monitoring in the lead-up to the 2013 elections.

A 2018 Far Eastern University Public Policy Center study, “Does Gen Z Care?” found that “many Gen Z students are not yet very much inclined to participate in political and civic affairs.” Gen Z would include young people who are voting for the first time in the coming polls.

Many are also “undecided when it comes to the most controversial issues of the day,” according to the study. However, the study found that education, specifically “college experience,” could instill greater social awareness, or at least train young people for better civic engagement.

This seems to be true for the 2019 elections as well. In February, students from the University of Cebu-Banilad campus urged fellow students to vote intelligently by doing research on candidates’ track records.

On Tuesday, April 9, youth movement #WeTheBrave called on fellow-youth to be critical when it comes to candidates’ platforms and campaign promises.

What, then, of other youth who do not have the privilege of a college education?

In a 2017 survey by the Philippine Statistics Authority, 9% of Filipinos aged 6-24 were recorded to be out of school. 83% of the youth surveyed were between 16 and 24 years old. Many are out of school because of family problems, lack of interest, and financial concerns.

“Again, it’s not just the university, it’s actually several other agents of political socialization – family, peers, university, media…I think it holds true that for the youth in general, these factors shape what they think about politics and how they participate in it,” Bautista said.

“Young people remain fragmented and their local experiences matter: unemployment, conflict, discrimination, and lack of education, [for example]. These experiences affect their voting preferences based on whom they think can meet their needs,” Cornelio said.

“The most important variables affecting voting preferences are education, religion, and to a certain extent, class. But even these variables also shift depending on issues of the day,” he added.

Far from apathy, Cornelio would characterize the youth’s attitudes toward elections and politics in general as fragmented, colored by their own backgrounds.

Asked if there is a youth vote, both professors said no.

Above all, she added that it would be most important to look at socioeconomic factors that inform how the youth participate in politics and in elections.

Young people like Lopez and Reyes are cognizant of this fragmentation. “[There are those] who are comfortable, privileged enough to tune out of the political noise,” Lopez said.

In their campaign work, Reyes is the one involved in empowering partner communities to vote and campaign for the Otso Diretso candidates. In his work, he said, he sees the value of face-to-face conversations with people on the ground.

“[Campaigning and politics is] a matter of getting the context of people, so you don’t just get confined in your own echo chamber,” Reyes said.

She said that more and more, youth are turning to “social movement-oriented forms of participation,” like boycotts and working for non-governmental organizations or NGOs.

Aside from work in the campaign, Lopez is involved in the Disgruntled Young People network, a group of young people who regularly hold roundtable discussions about pertinent issues in the country. Through their network, they also participate in a bunch of volunteer engagements.

Reyes, meanwhile, works for Hirayang Kabataan – consisting of young people who conduct leadership trainings for others their age “to build a country governed by leaders with competence and integrity.”

They both spoke with passion, but Lopez cushioned her optimism with a bitter pill of sorts. “Hindi lang puwedeng puro advocacy, kasi may political realities din (Advocacy alone is not enough because there are also political realities).”

Asked where they’ll be after the 2019 polls, Lopez and Reyes said they would continue participating in politics with these advocacies. “There needs to be a call for social movements for people to be more engaged in politics.”

“It’s not enough that you vote,” Lopez said. – Rappler.com