How much do you need to become senator? 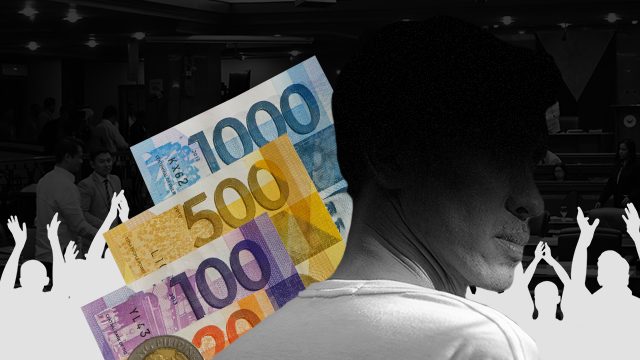 MANILA, Philippines – Want to craft the country’s laws and be a senator of the Philippines? Aside from political will and charisma, you’re going to need cash. Lots of it.

To run a successful campaign, a senatorial candidate has to burn cash to woo the voting public and shield himself or herself from propaganda.

Just how much does running a national campaign actually cost?

Looking at the numbers of the previous 2016 elections, the 12 winners of the senatorial elections spent an average of P107 million. (Newsbreak Chats: Should Philippine elections be this expensive?)

According to the candidates’ statements of contribution and expenditures (SOCEs), most of the funds were from donations and contributions.

In general, candidates poured money mostly on TV spots. Candidates allocated around 90% of their expenses on political ads.

On average, winning candidates spent around P98 million each for TV commercials. In total, they spent a whopping P1.2 billion just for political ads.

It is unclear whether the figures indicated in the SOCEs reflect the expenses for crafting the political ads.

A creatives director of a well-known advertising agency said conceptualizing and shooting a campaign ad could range anywhere between P1 million to P3 million, depending on the agency. Stars appearing in campaign ads usually waive talent fees to throw support for the candidate.

The Gozon-led network GMA 7 was able to rake up P2.3 billion also during the same period, 116% higher than the first half of 2015.

The same trend can be observed in other years when elections are held.

However, income sharply dips once the election year ends.

A source who negotiates the price of airtime for clients said ABS-CBN’s ad spots are much more expensive than GMA 7’s. A 30-second campaign ad could go as high as P1.4 million for primetime in ABS, while an ad on primetime for GMA costs less than half at around P600,000.

What SOCEs do not show

SOCEs of candidates show what they spent during the campaign period, provided of course they truthfully state what they all spent.

However, these statements do not show what candidates spent prior to the campaign period. (READ: [OPINION] Is it time to amend the Philippines’ campaign finance law?)

A recent report by the Philippine Center for Investigative Journalism (PCIJ) revealed that candidates spend way more ahead of the official campaign period.

PCIJ, using the ad placement data of Nielsen Media, found that former presidential aide and current senatorial candidate Bong Go had already spent some P422 million for 29,940 seconds of airtime, while Imee Marcos spent a total of P413 million for ads from January 2018 to January 2019.

PCIJ went on to compare the candidates’ total adspend to their net worth based on their Statements of Assets, Liabilities, and Net Worth (SALNs) and found that top spenders Go and Marcos’ net worth were way below than what they spent. Go’s net worth is only P12.85 million as of 2017, while Marcos’ net worth was only P24 million.

Candidates also spend a lot on flyers and posters. According to data from the SOCEs of the candidates in the 2016 elections, winning candidates spent an average of P4.8 million or a total of P58 million for printed materials.

Rappler asked some companies that print posters and flyers and found that flyers cost around P75 to P90 per ream of 500 sheets of paper.

If each sheet can produce 4 flyers, it would mean that one ream can produce 2,000 flyers.

If there are around 60 million registered voters and a candidate wants to give out at least a flyer to each one, the candidate would need to print out flyers from 30,000 reams and that would cost P2.7 million.

Meanwhile, tarpaulins cost around P45 per square foot. Given this cost, a 5×5 tarpaulin would cost P1,125 per piece. Should a candidate have 100 tarpaulins of that size for each region, it would cost them almost P2 million.

For candidates who wish to have ballers istributed during campaign sorties, each baller would cost around P3, provided the candidate orders a minimum of 300 pieces.

If a candidate wants to give ballers to at least a third or 20 million of the total number of voters, he or she would need to cough up a whopping P60 million.

T-shirts have varying costs. Depending on the quality, shirts cost around P50 to P75 apiece.

Senator Pacquiao was the top spender for printed materials, alloting P30.1 million for it.

Interestingly, senator Joel Villanueva reported in his SOCE that he did not spend a single peso for printed materials. Spending some P163.8 million during the official campaign period, he allotted 99.9% or 163.7 million for TV airtime.

What candidates did not spend much on

While running a campaign requires a lot of travel, numbers from candidates’ SOCEs do not show much cash poured into it.

On average, winning senatorial candidates in the 2016 elections spent an average of P800,000 for travel. Senator Francis Pangilinan was the top spender among winners, who cashed out over P2 million for travel.

Candidates also relied mostly on volunteers who were not compensated for their support.

Pouring out cash, however, does not always guarantee victory.

Senatorial bet Francis Tolentino, who spent almost P200 million, did not win in the last elections. His expenses were twice the average of winning candidates’ expenses.

He finished 13th in the race for 12 winners, which prompted him to launch a protest against De Lima who landed on No. 12. He eventually withdrew his protest in light of the 2019 elections.

Indeed, running for senator is ridiculously expensive. Yet money can’t always buy the most coveted seat in the Senate. – Rappler.com