Things to know: the bill that seeks to protect human rights defenders 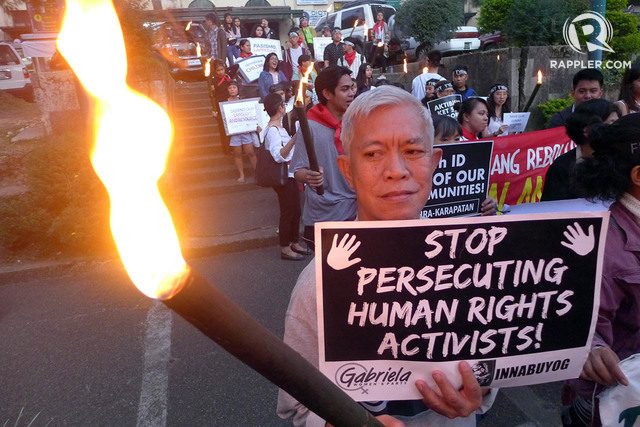 MANILA, Philippines – A bill seeking to strengthen the security of human rights defenders in the country is one step closer to becoming law as it successfully navigated one chamber of Congress.

The House of Representatives on Monday, June 3, approved on 3rd and final reading House Bill 9199 or the Human Rights Defenders Protection Act after years of deliberations.

The final House version is a consolidated version of two proposed bills – HB 8128 introduced by Edcel Lagman in 2017 and HB 1617 filed in 2016 by the Makabayan bloc. An earlier version of the proposed bill was first filed during the 14th Congress.

What else do we need to know about this proposed bill and the situation of human rights defenders in the Philippines?

Who are considered human rights defenders?

According to the proposed bill, human rights defenders are those involved in the protection, promotion, “or strive for the promotion and realization” of human rights and other fundamental freedoms of people regardless whether they are working in the local, regional, national, or the international arena. (READ: Things to know: Human rights in the Philippines)

Why do we need a Human Rights Defenders Protection Act in the first place?

The creation of the proposed Human Rights Defenders Protection Act is in response to the worrisome situation of defenders in the Philippines.

Since 2001, at least 613 defenders have been killed, according to rights group Karapatan. The Philippines has continuously been among the 6 countries that account for 80% of the deaths of defenders worldwide along with Brazil, Colombia, Guatemala, Honduras, and Mexico. (READ: Human rights defenders also killed under Duterte administration)

The existing climate of impunity in the Philippines also doesn’t help, especially as threats and harassment come from President Rodrigo Duterte himself.

While attacks aren’t unique to his administration, the explicit nature of his attacks on the rule of law, climate of fear, and the demonization of the concept of human rights, contribute to what groups call the “worst human rights crisis” in the country. (READ: Powering through a crisis: Defending human rights under Duterte)

Since June 2016, human rights group Karapatan said it has documented at least 134 deaths since Duterte took office in June 2016. In 2017, Ireland-based Front Line Defenders reported that 60 defenders died in the hands of unidentified gunmen.

The United Nations also placed the Philippines in a list of countries whose governments subject human rights defenders and activists to “an alarming and shameful level of harsh reprisals and intimidation.”

“It is high time that we accord stronger legal protection to those who defend not only their own human rights and fundamental freedoms but those of others as well,” Lagman said in a statement.

What are the attacks against human rights defenders?

According to the explanatory note of the Makabayan bloc, human rights defenders are subjected to different kinds of harassment and threats. These include:

Many groups also emphasized that these attacks do not only target the defenders themselves, but also extend to their families. This aims to act as a way to prevent them from continuing with their works to spare their loved ones from the harassment.

“Human rights campaigns are affected in many regions in the country by restrictions on the activities and the persecution of human rights defenders leaving the people more vulnerable to abuses,” the Makabayan bloc said.

In a position paper, Task Force Detainees of the Philippines pointed out that the continuous attacks prove that there is still a huge obstacle preventing human rights defenders from “[carrying] out their peaceful and legitimate activities in a safe and enabling environment without fear of being subjected to acts of intimidation or violence of any sort.” What does the proposed Human Rights Defenders Protection Act want to achieve?

The proposed act wants to ensure that protections are in place for the rights and freedoms of human rights defenders especially in the context of the rising number of attacks against them.

It also wants to emphasize the government’s responsibility to ensure mechanisms are in place to guarantee the safety of human rights defenders.

“The law must also clearly specify the obligations of public authorities to ensure the enjoyment of these rights and freedoms, and impose appropriate sanctions to counter impunity,” Lagman said in his explanatory note.

The proposed bill is also intended to conform with various international instruments signed by the Philippines, including the United Nations Declaration on the Rights of Human Rights Defenders adopted in 1998.

If signed into law, the bill will lead to the creation of the Human Rights Defenders Protection Committee chaired by a member of the Commission on Human Rights and 6 members nominated by civil society organizations.

What are the rights of defenders?

Certain rights are laid out in the proposed bill for human rights defenders which complement the existing rights enshrined under the 1987 Philippine Constitution. (READ: Hate human rights? They protect freedoms you enjoy)

What will the state’s responsibilities be?

The proposed bill puts the responsibility of protecting the above-mentioned rights on the state. It also assigns the government obligations that are related to ensuring human rights defenders are not subjected to any harm, and in the event it happens, that perpetrators are held accountable in accordance with Philippine laws.

The state, according to the proposed law, is obliged to:

Perhaps the most important aspect the proposed bill wants to see fulfilled is the state obligation to conduct investigations, and prevent from, and penalize forms of, intimidation and reprisals.

This means that the government needs to make sure that human rights defenders who see themselves as victims of harassment because of their work are given justice through proper conduct of investigations, aside from implementing programs that prevent such crimes from happening.

After passing the House of Representatives, what’s next?

The Senate version still needs to be passed before it can be transmitted to Duterte for signature.

Senate Bill 1699, introduced by detained Senator Leila de Lima, is still pending at the committee level after it was first filed in February 2018.