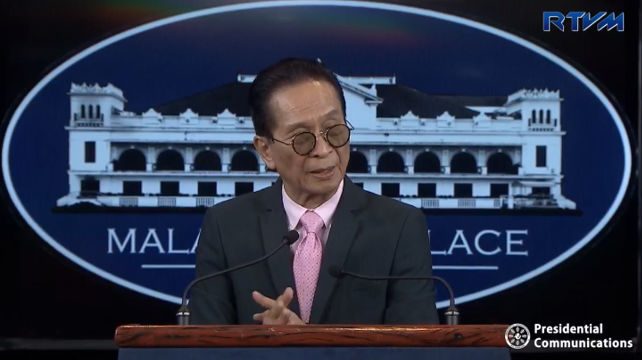 MANILA, PHILIPPINES – One key figure involved in the trial of former Calauan, Laguna mayor Antonio Sanchez over the death of two University of the Philippines-Los Baños (UPLB) students holds a high position in the Duterte government: Salvador Panelo.

Sanchez was convicted for the rape-slay of then 21-year-old student Mary Eileen Sarmenta in 1993. He was also charged for the murder of Sarmenta’s companion and schoolmate, then 19-year-old Allan Gomez.

Panelo was among Sanchez’s defense lawyers in the trial.

The then-mayor, along with 6 others, was sentenced to 7 terms of reclusion perpetua. The revised penal code allows successive service of multiple sentences, with a maximum period of 40 years.

Unless there are last-minute changes, after serving only 25 years, Sanchez is reportedly going to be released early, benefitting from the passage of Republic Act (RA) 10592, a law that provides for good conduct time allowance (GCTA). But Bureau of Corrections chief Nicanor Faeldon said that Sanchez may not be part of the first wave of inmates set for release because of his alleged misdemeanors.

The law was signed in 2013 by former president Benigno “Noynoy” Aquino III and provided for prospective application, but in June, the Supreme Court ruled that the law applies retroactively.

Particulars of the case

Panelo was present when Sanchez was subjected to an inquest on August 13, 1993.

According to a transcript cited by the Supreme Court, Panelo was the one who said that Sanchez waived his right to submit a counter-affidavit.

This became a matter of issue as Sanchez would later say the representation of Panelo was “unauthorized and inofficious.”

The SC, however, said that the mayor was present during this exchange and “never disowned Atty. Panelo as his counsel,” adding that “he remained quiet and let this counsel speak and argue on his behalf.”

Panelo has denied involvement in Sanchez’s impending release. On Thursday, August 22, he said that he withdrew from the case after the last day of hearing in 1995, adding that he no longer communicates with Sanchez.

Justice Secretary Menardo Guevarra said the former mayor is eligible for the reduced jail term. He also cleared Panelo of involvement in Sanchez’s release, adding that the matter of computation of GCTAs is “purely ministerial.”

Apart from the deaths of the students, Sanchez was also responsible for the murder of two others – a father and son. However, these have no bearing on the length of his statement nor the computation of his GCTA, because the revised penal code provides that maximum prison time shall not exceed 40 years.

“Good conduct subject to time allowances is the conduct exhibited during prison time, not conduct before imprisonment, no matter how reprehensible it may have been,” said Guevarra.

Some reports say, however, that Sanchez has had his share of incidents involving contraband while serving time. In 2006, the Philippine Daily Inquirer reported that Sanchez was charged with possession of drug paraphernalia, packets of shabu and marijuana, after he was caught by a prison guard. Sanchez said in an interview that he was “framed” for the drug charges.

In 2010, he was found to be in possession of prohibited items, including an airconditioning unit and flatscreen TV. He explained that he needed these equipment in his cell because he has skin asthma and various heart and kidney conditions.

Asked about these incidents, Panelo said that they will leave it up to the DOJ.

Who else has Panelo lawyered for?

The Presidential Spokesperson has handled several controversial cases in his years serving as legal counsel. (READ: Duterte’s spokesman Panelo and his high-profile cases)