What do we know about SEA Games 2019’s Phisgoc? 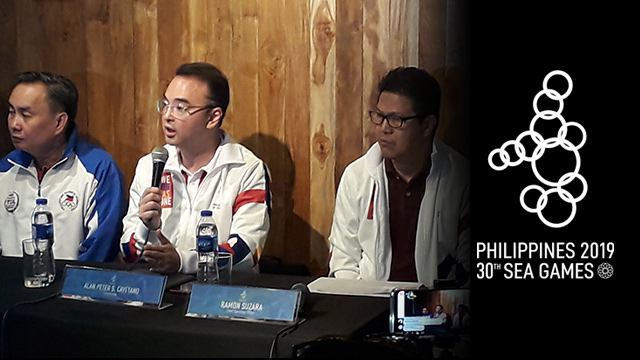 MANILA, Philippines – The hosting of the 30th Southeast Asian Games 2019 has come under fire for all the avoidable blunders and logistical shortcomings even before the official opening of one of the biggest sporting events in the region.

Critics have hit the subpar treatment of official delegates and the rushed venues, among others, vis-a-vis the huge budget provided to organizers.

The Philippine Sea Games Organizational Committee (Phisgoc), the main team behind this year’s event, pleaded for “positive” reports and comments and has repeatedly blamed the media for the negativity.

But Malacañang on November 28 said that some of the criticisms should be taken seriously, adding that it will conduct a separate investigation into the mishaps.

House Speaker Alan Peter Cayetano, the SEA Games 2019’s top honcho, dismissed allegations of corruption hurled against him and his team, and vowed to face all probes into blunders and anomalies in the country’s hosting.

Amid all the controversy and noise, what do we really know about Phisgoc? Here’s what Rappler has found out:

The establishment of a separate committee to organize event is not unusual. In fact, the creation of such group is backed by the South East Asian Games Charter and Rules.

Under rule 21 of the charter, the host country “may delegate duties with which it has been entrusted to a special Organizing Committee chosen by itself, and whose officials shall henceforth correspond directly with the Executive Committee of the Federation.”

The government also created their own versions of an organizing committee during previous SEA Games hostings. In 2005, for example, it was called PHILSOC.

In July 2018, the Philippine Sea Games Organizational Committee Foundation was incorporated, according to papers filed with the Securities and Exchange Commission (SEC).

Its Articles of Incorporation (AOI) document, obtained by Rappler on November 28, highlights Phisgoc’s main purposes, which include to:

In January 2019, Executive Secretary Salvador Medialdea released Memorandum Circular No. 56 which directs several government agencies to assist and cooperate with Phisgoc for the “effective preparation and successful participation” in the SEA Games 2019.

The incorporation of Phisgoc was not without controversy involving the Philippine Olympic Committee (POC). (TIMELINE: Will the POC feud affect PH’s SEA Games hosting?)

Minutes of a meeting in April 2019 showed them questioning why Phisgoc was incorporated “when such function is already vested in the POC.”

They also questioned why several POC officials, including then-president Victorino Vargas, was among the incorporators when Phisgoc’s purposes “clearly usurp that of the POC as regards the preparation of the 30th SEA Games.”

Points 1, 4, and 6 in the incorporation papers highlight the possibility of Phisgoc Inc handling or taking charge of “future” or “other” games hosted in the Philippines.

According to well-placed sources, these parts go against Rule 21 of the SEA Games charter, which explicitly states that “the power of this Organizing Committee shall cease at the end of the Games.”

Below is the minutes of the board meeting where POC questioned Phisgoc’s incorporation.

POC general counsel Al Agra replied, through a letter, that Cayetano was advised to incorporate and register with the SEC based on what previous organizing committees did for the 1991 and 2005 SEA Games hostings by the Philippines.

He further emphasized that the Phisgoc AOI “are the same and substantially a faithful reproduction the purposes” of previous committees.

Cayetano also said during a Senate budget hearing that they have no choice, adding that “if we don’t want the foundation, we cannot hold the games.”

President Rodrigo Duterte himself expressed apprehensions over Phisgoc Foundation. In an interview with the Daily Tribune in July, Duterte said that it “only muddles up the issue. So many fingers are dipping into the hosting. It should only be government.” 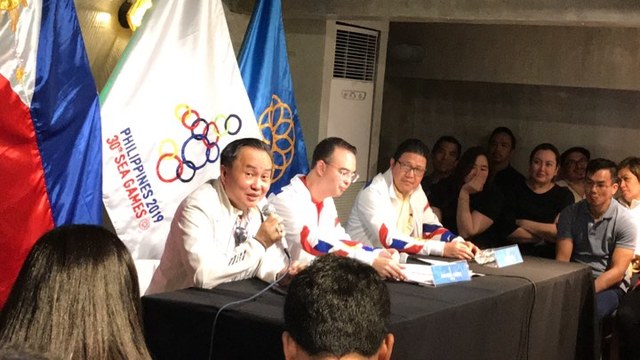 An organizational chart whose accuracy was confirmed by a highly-placed source shows members of the Phisgoc executive board and directors from the field of sports, government, and the business sector. Many are also connected, via the same organizations and corporations, such as the BCDA.

The chart also shows President Rodrigo Duterte as the chairperson emeritus while businessmen Manny Pangilinan and Dennis Uy are named members of the board of advisers.

Below are the members of the executive board and Phisgoc management committee:

Cayetano was appointed chairperson in 2017, supposedly by Duterte himself. He was officially recognized by then-POC president Peping Cojuangco in August 2017. During this time, he was the foreign affairs secretary.

He did not cease leading the committee even as he was elected Taguig representative, after which he eventually became Speaker. Cayetano’s stint in Phisgoc is being questioned by many, citing conflict of interest and even constitutional issues. (READ: Is it constitutional for Cayetano to be Phisgoc chair?)

Ramirez is the incumbent chairperson of the Philippine Sports Commission (PSC). He has served in two administrations – under then-president Gloria Arroyo and under President Rodrigo Duterte. Ramirez was also the sports chief in Davao City under Duterte. During his presidential campaign in 2016, Ramirez served as Duterte’s advance party head, in charge of coordinating logistics of sorties.

In May 2018, Ramirez began serving a 3-month suspension in relation to the hiring of additional security guards allegedly without the approval of the PSC board in 2008, according to a Philippine Star article.

Tolentino is the incumbent Cavite 7th district representative. He was first elected to the House of Representatives in 2013. Prior to working in Congress, Tolentino served as 3-term Tagaytay mayor, starting in 2004.

He is the current president of the POC after being elected in July 2019. Aside from the POC, Tolentino, the brother of Senator Francis Tolentino, was also the secretary-general of the International Chess Federation. 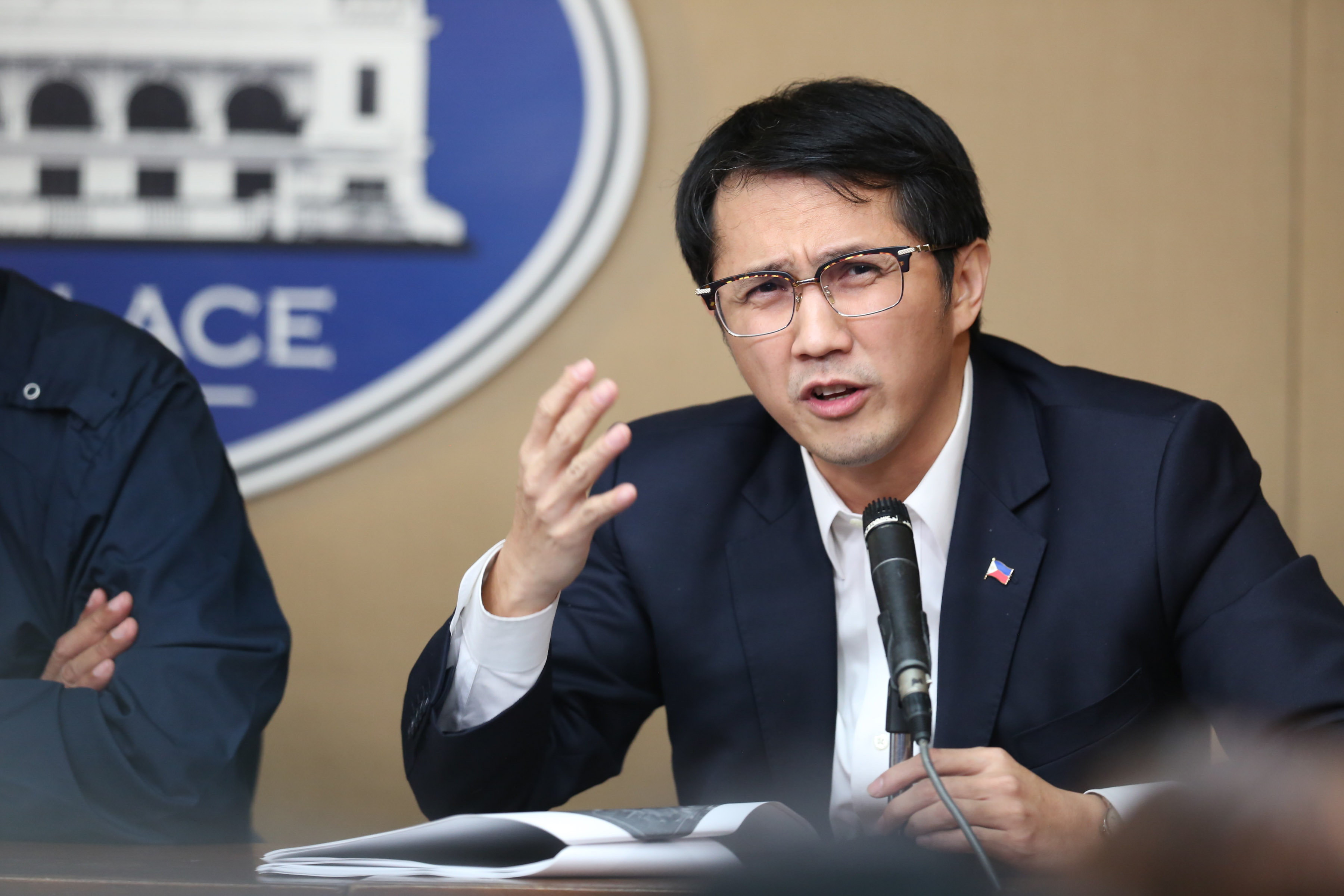 Dizon is the president and CEO of Bases Conversion and Development Authority (BCDA). He has also been the Presidential Adviser for Flagship Programs and Projects since April 2018. As BCDA president, Dizon is part of the Cabinet cluster on infrastructure.

According to his resume uploaded on a government website, Dizon was a former consultant of Cayetano when he was still senator.

Macasaet is the acting president and chairman of the Government Service Insurance System (GSIS). He previously served in other government-owned and controlled corporations since 1998, including the Philippine National Construction Corporation and Skyway Corporation, among others.

Hontiveros is the chairperson of the POC and president of the Philippine Handball Federation. He is also a former International Bowling Federation president, among other sports-related organizations, both local and international.

He has served as chief of mission of the Philippine delegation to several international sporting events, including the SEA Games 1993 in Singapore, Greece Olympic Games in 2004, and the Kazakhstan Winter Games in 2011. He was also the secretary general of the organizing committee for the 2005 SEA Games.

Gastañes is the secretary-general of the Philippine Olympic Committee, as confirmed by the POC board in August 2019. He also serves as Philippine Football Federation general secretary and is a member of the Asian Football Confederation’s Legal Committee, starting from 2015 and until 2013. 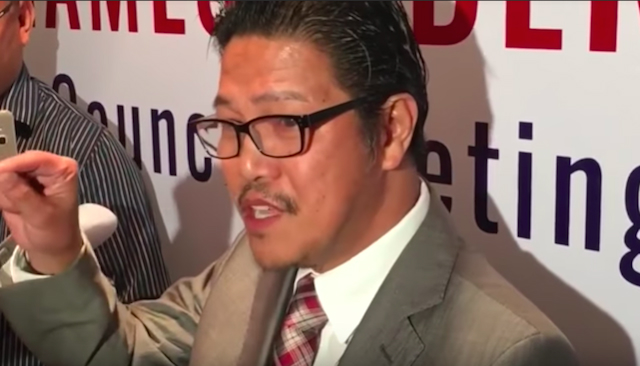 Suzara is a member of the Phisgoc executive board and also the chief operating officer of the management committee. He is also one of the incorporators of Phisgoc Foundation.

He was the former president of the volleyball league Philippine Superliga (PSL). In February 2019, PSL filed a qualified theft complaint amounting to P6.75 million against Suzara before the Taguig City prosecutor’s office. The group also filed a complaint in July 2018 before the National Bureau of Investigation (NBI) over “irregular and unauthorized disbursements of company funds.”

The Taguig prosecutors dismissed the complaint in July 2019.

According to his LinkedIn profile, Alcazar is also the chief ICT advisor of the Bases Conversion and Development Authority. He was formerly with Smart Communications.

Aside from being the Phisgoc managing director for operations, Mitra is also one of the incorporators of Phisgoc Foundation. She is also staff of Alan Peter Cayetano.

She is the granddaughter of the late speaker Ramon Mitra. Her uncle, Abraham Mitra (son of Ramon), is the current chairperson of the Games and Amusements Board and former Palawan governor.

Iroy is the deputy executive director of the Philippine Sports Commission’s Bureau on Coordinating Secretariat and Support Services. He is also the project director of Batang Pinoy.

Iroy is also a member of the Asian Football Federation’s Disciplinary and Ethics Committee and will serve for 4 years.

SEC documents as submitted in July 2018, meanwhile, show the incorporators of the Phisgoc Foundation. Besides Suzara and Mitra, they include the following:

Gregorio is the former secretary-general of the POC. He served under then-POC president Vargas.

Beyond his sports-related groups, Gregorio is involved in several businesses, including Maynilad, the Waterfront chain of hotels, and Cebu Visitors and Conventions Bureau, among others. 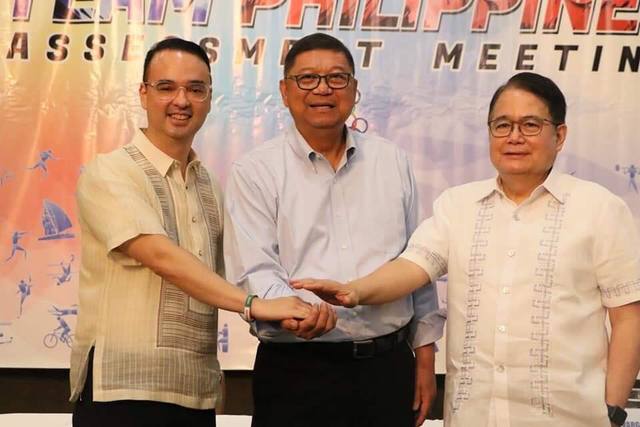 Vargas was the 10th president of the POC. He resigned in July 2019 – 5 months before the 30th SEA Games – following the controversy involving the incorporation of Phisgoc. The POC questioned Vargas’ actions in relation to Phisgoc.  (TIMELINE: Will the POC feud affect PH’s SEA Games hosting?)

He is currently the president of the Association of Boxing Alliances in the Philippines and was recently reelected PBA chairman as TNT kaTropa governor.

Caringal is the former director of finance of the Philippine Superliga (PSL).

Together with Suzara, Caringal faced qualified theft complaints filed by the PSL in 2018 over alleged misuse of funds amounting to millions. The irregularities, according to PSL, was discovered when the league hired an independent auditor. (READ: PSL prepares for legal battle vs former president, treasurer)

The two denied the allegations.

Carrasco is a former chairperson of the POC, serving from 2013 to 2016. He was the chief de mission to the 2001 Asian Games in Busan, South Korea.

On the business side, Carrasco owns the Asian Center for Insulation Philippines.

Picson is the former communications director of POC. He is also involved with the Association of Boxing Alliances in the Philippines as its secretary-general and executive director.

Together with Vargas, his involvement in the Phisgoc incorporation was questioned by the POC in April 2019.

Estacio is a long-time marketing and communications man. Based on documents obtained from the SEC, he was elected treasurer of Phisgoc Foundation. – Rappler.com

Do you have any information on Phisgoc officials or SEA Games 2019 preparations? Shoot us an email at investigative@rappler.com.