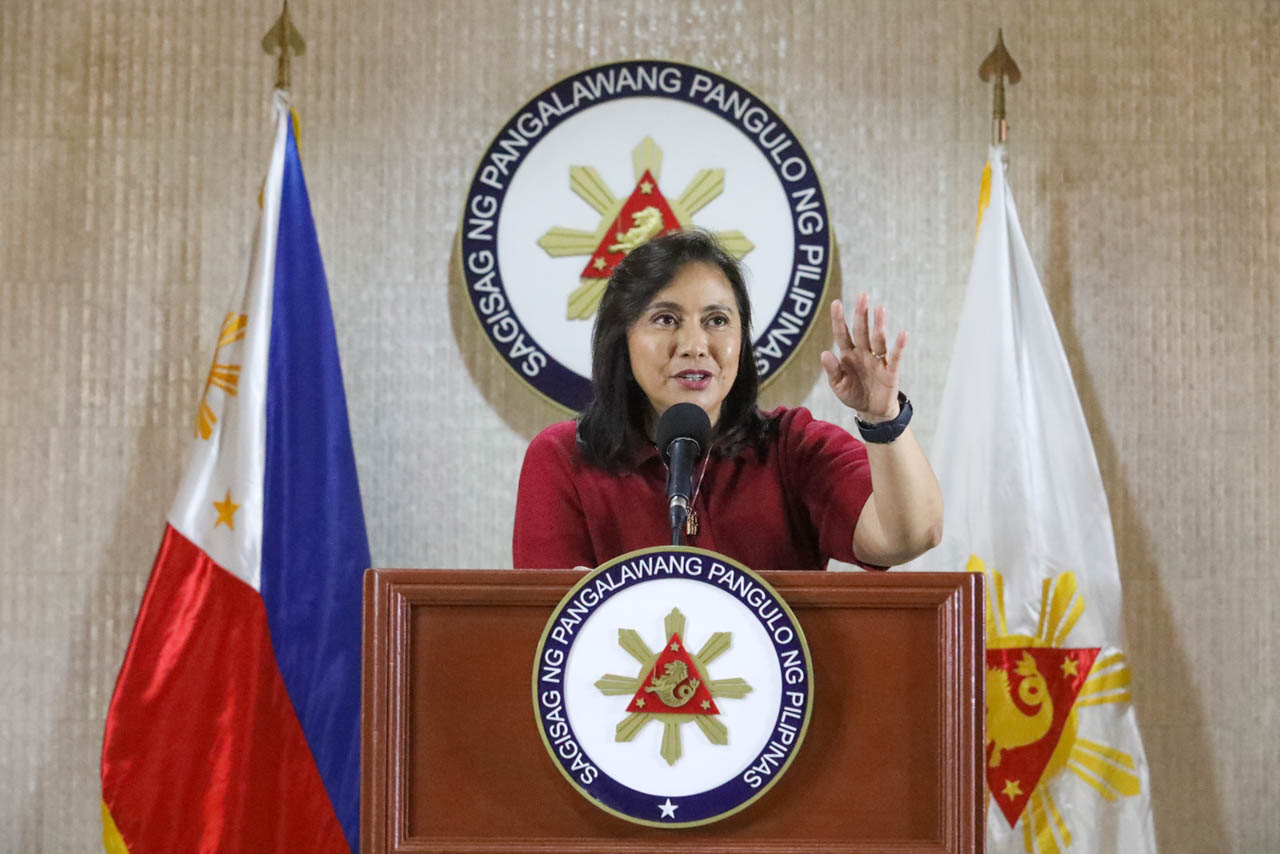 MANILA, Philippines – Vice President Leni Robredo flunked the administration of President Rodrigo Duterte in its fight against illegal drugs in the country.

Robredo, whom Duterte fired as Inter-Agency Committee on Anti-Illegal Drugs (ICAD) co-chair after just 18 days on the job last year, finally publicized her findings as well as her recommendations to improve the anti-narcotics campaign on Monday, January 6.

Citing data given to her during her brief time in the ICAD, the Vice President gave a “1 out of 100” score to the bloody drug war because authorities were able to recover only 1% of the total shabu being consumed nationwide and were only able to seize just 1% of the dirty drug money being circulated across the country.

But Robredo dedicated much of her 40-page ICAD co-chair report to detailing her suggestions on how the Duterte government can improve its campaign to end the drug menace.

Her office sent a copy of this report to Malacañang Monday morning.

“Through the presentation of the findings and recommendations contained in this Report, the hope is for our focus to be directed to the true and common enemy: the continued proliferation of illegal drugs that destroys the lives and futures of many Filipino families,” said the former ICAD co-chair.

From scrapping the controversial Oplan Tokhang to giving more powers to the Anti-Money Laundering Council (AMLC) to directly go after drug lords who launder money, here are the Vice President’s drug war recommendations:

Problem: Creating ICAD is a “step in the right direction” but there is a lack of strategic leadership while the participation of member-agencies in the anti-drug body is not equal.

When he created the ICAD in 2017, the President designated the director-general of PDEA, an agency focused on the law enforcement side of the drug war, as ICAD head instead of the DDB, which is mandated to be a policy-making and strategy-formulating body on drug prevention and control.

Robredo believes the DDB chair is more equipped to craft a comprehensive program for ICAD’s operations and to ensure other aspects of the drug war apart from enforcement – justice, advocacy, rehabilitation, and reintegration – are not neglected

Robredo believes activating this still-untapped task force under ICAD would help streamline and harmonize all anti-drug operations of law enforcement agencies. She also recommended that the task force and its commander regularly submit a quarterly report made available to the public so the ICAD “has accountability on its own.”

The Vice President said ICAD’s policy and strategy discussions would be more “enriched” if civil society groups and LGUs become part of the anti-drug body, as the nature of their work requires them to work closely with individual citizens.

Problem: Metrics in determining success of drug war are faulty because there is no baseline data.

Robredo said the DDB should continue conducting its survey on drug prevalence in the country every 3 years.

The data in the Department of the Interior and Local Government’s newly launched Anti-Illegal Drugs Information System should also be updated and made more comprehensive to cover the current status of recovering drug addicts who were either arrested or who voluntarily surrendered to authorities.

“As emphasized in the previous reports to the President, without standard and harmonized baseline information, there will be no benchmark for measuring the success of the programs,” said the Vice President.

The Vice President said doing so would make it easier for the government to separately track the number of drug users and pushers.

Problem: The drug war has “lopsided” priorities and is largely focused on going after street-level drug users and peddlers

Robredo said the lack of operational guidelines for the police conducting tokhang “gave an opening for some unscrupulous elements to commit abuses that have made the implementation of the entire program controversial.” (READ: The Impunity Series)

The Vice President believes barangay officials are better suited to go door-to-door to convince drug addicts to change their ways, as local ADACs and ADAOs play a central role in all aspects of the anti-drug campaign in their respective communities.

Robredo said body cameras would allow the PNP to exact accountability from erring cops. But at the same time, innocent police officers would also have evidence against unwarranted accusations of abuse.

Both criminal and administrative cases filed against police officers found guilty of abuse should be “expeditiously” pursued by the government.

The Ombudsman may also create a task force focused only on investigating and prosecuting drug-related abuses of public officials.

The Vice President said family members of drug war victims, their lawyers, and even the general public should have access to this data. Denial of access, Robredo argued, “only serves to further aggravate suspicions of official misconduct and operational irregularity.” (READ: TokHang documents prove drug war caused cops to kill suspects – FLAG)

Problem: The Duterte government committed a “massive failure” in constricting the supply of illegal drugs in the country.

Citing the Philippine Anti-Illegal Drugs Strategy, Robredo said there are 4 major drug cartels operating in the country: the Chinese or Filipino-Chinese drug syndicates, African drug syndicates, the Mexican-Sinaloa drug cartel, and syndicates from the Golden Triangle or Myanmar, Laos, and Thailand.

The Vice President said Duterte should consider working more closely with the governments of these foreign countries to restrict the drug supply entering the Philippines.

Robredo recommended deploying enough high-powered X-ray machines and drug-sniffing K-9 units in every airport and sea port in the country so authorities can immediately detect illegal drugs being smuggled into the Philippines.

Security measures in prisons should be stricter so inmates would no longer have the capacity to run their drug trade from jail. (READ: With smuggled phones, drug lords ‘still control operations’ from Bilibid)

“If the drug war is this administration’s main program, it must put money where its mouth is and support law enforcement officers who put their lives on the line to go after big drug lords and operators,” said the Vice President.

Robredo said the Office of the Solicitor General may already deputize the AMLC so it can already prosecute cases of money launderers. More budget should also be given to the AMLC so it can hire additional financial investigators for drug-related cases.

Read the full copy of Robredo’s ICAD co-chair report below: