Jan 31, 2020 9:00 AM PHT
Michael Bueza
Facebook Twitter Copy URL
Copied
President Duterte has threatened to scrap the military pact between the Philippines and the United States. Here's what you should know about it. 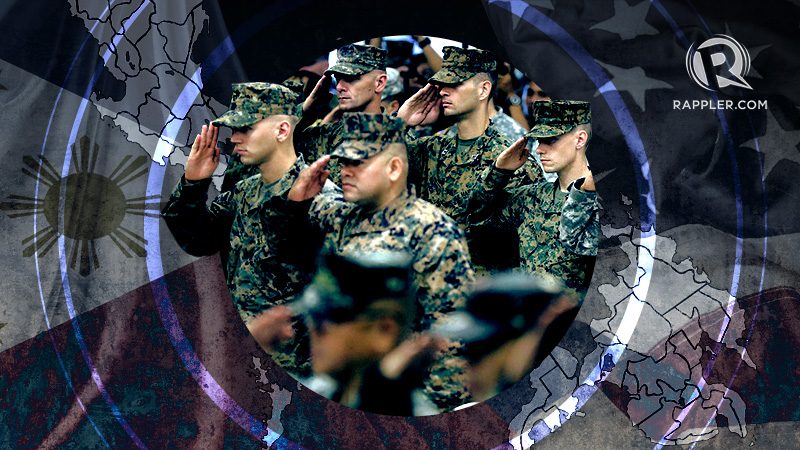 MANILA, Philippines – Two decades after it took effect, the Visiting Forces Agreement (VFA) is in danger of being terminated in the Philippines.

This is after President Rodrigo Duterte threatened to scrap it, following the United States’ move to cancel the visa of Senator Ronald “Bato” dela Rosa as part of Washington’s crackdown on human rights violators. A retired Philippine National Police chief, Dela Rosa is known to be the architect of Duterte’s war on drugs that has resulted in thousands of deaths in a span of 3 years.

Know more about the VFA in this Q&A explainer.

What is the Visiting Forces Agreement?

The Visiting Forces Agreement is a pact between the Philippines and the United States containing guidelines and conditions for US military and civilian personnel who are temporarily sent to the Philippines.

The agreement was an affirmation of the two countries’ obligations under the Mutual Defense Treaty (MDT) signed in 1951. The MDT is a commitment to defend each other – in accordance with constitutional processes – in the event of an armed attack by a hostile party.

The VFA was crafted following the Philippine Senate’s rejection in 1991 of extending the presence of US bases in the country.

The Enhanced Defense Cooperation Agreement (EDCA), signed in April 2014 under then-president Benigno Aquino III, serves to operationalize the VFA. Military activities approved by the Philippines also fall within the context of the VFA. The executive agreement provides for increased rotational military presence of US troops, planes, and ships in the Philippines and gives them wider access to military bases in the country.

In effect, as the implementing agreement of the VFA, EDCA allows the prepositioning of war materials in approved locations. It also entails capacity-building towards the modernization of the Philippines’ armed forces. (READ: PH primer on military pact with US)

Former president Joseph Estrada ratified the VFA on October 5, 1998. (Estrada succeeded Fidel Ramos, who was president at the time of the VFA’s signing.) On May 27, 1999, the Philippine Senate voted 18-5 to concur with the ratification, resulting in the effectivity of the VFA.

The VFA also provides for a reciprocal or counterpart agreement that was signed on October 9, 1998. That agreement covers Filipino personnel temporarily sent to the US.

What does the VFA cover?

The VFA provides rules for the entry and departure of US personnel in the Philippines, the movement of military vessels and aircraft, and the import and export of equipment and supplies in connection with activities covered by the agreement.

Former foreign affairs secretary Albert del Rosario also noted that the VFA, for instance, made the quick movement of US aid to the Philippines possible after Super Typhoon Yolanda (Haiyan) hit in 2013.

In addition, the VFA also provides guidelines in the event of a crime committed by US personnel on Philippine territory. In general, the Philippines has jurisdiction over US personnel who commit crimes in the country, and can impose sanctions and punishments in accordance with Philippine laws. If offenses are, however, committed in relation to US security and property, or committed in the performance of official duty, US military authorities assume jurisdiction over their erring personnel.

Why does President Duterte want to end the VFA?

The President moved to scrap the VFA after two US diplomatic actions irked him.

In December 2016, Duterte warned of an “eventual repeal or abrogation” of the VFA after the US did not push through with an aid package for the Philippines from the Millennium Challenge Corporation, an aid-giving body. Duterte, however, deferred his decision out of respect for newly-elected President Donald Trump.

In January 2020, the US cancelled the visa of Senator dela Rosa over links to human rights violations, again prompting Duterte to say he will “terminate” the VFA within a month if the US does not fix what it had done.

How is the VFA terminated?

Termination will take place 180 days from the receipt of a written notification of either party to the other:

“This agreement shall remain in force until the expiration of 180 days from the date on which either party gives the other party notice in writing that it desires to terminate the agreement.”

Can the VFA be terminated by the President alone?

The Duterte government argues it is within the President’s powers to terminate the VFA, likening it to the President’s decision to leave the International Criminal Court.

The Senate and the Department of National Defense seconded the argument, saying that while the Senate’s concurrence was needed for the VFA to take effect, the same is not needed to end it. They pointed to Section 21, Article VII of the 1987 Constitution, which requires Senate approval when signing a treaty, but is silent when it comes to ending it.

“It is well within the right of the Philippine government to do so if it determines that the agreement no longer redounds to our national interest,” Defense Secretary Delfin Lorenzana said on January 24.

How did others react to Duterte’s threat?

Senator Panfilo Lacson said on January 24 that Duterte’s reaction to cancel the VFA was not commensurate to Dela Rosa’s visa cancellation. (READ: Lacson questions ending VFA to get Dela Rosa’s visa back)

What has the Duterte gov’t done so far towards termination of the VFA?

On January 24, Foreign Affairs Secretary Teodoro Locsin Jr said he has “started” the process of “terminating” the VFA, by informing the foreign relations committee of the Philippine Senate. Lorenzana said on January 24 that he will “discuss with the President” the various scenarios pertaining to withdrawal from the VFA. Locsin heads the Presidential Commission on Visiting Forces, while Lorenzana is the vice chairperson.

On January 25, Justice Secretary Menardo Guevarra said his department is preparing a legal memorandum on the proper procedures to terminate the VFA. On January 27, however, Guevarra said that Malacanang has ordered a “preliminary impact assessment” on the VFA’s possible termination.

“It is my understanding that the President has threatened, but has not given an order, to terminate the VFA. That’s why his office has requested us to study the potential impact of such termination,” Guevarra said.

Have camps questioned the VFA’s validity and application before?

Shortly after the VFA’s ratification, the Supreme Court (SC) received 5 separate petitions questioning the validity of the VFA. The High Court consolidated all petitions in one case: Bayan vs. Zamora, referring to petitioner leftist group Bagong Alyansang Makabayan (Bayan) and defendant Ronaldo Zamora, who was executive secretary at the time the case was filed.

The petitioners tried to argue that the VFA “abdicates” Philippine sovereignty when it comes to trying offenses committed by US personnel.

On October 10, 2000, the SC dismissed their petitions, saying there was no grave abuse of discretion by the President and the Senate when they VFA was ratified. The SC also said it respects the separation of powers and the systems of checks and balances. “True enough, rudimentary is the principle that matters pertaining to the wisdom of a legislative act are beyond the ambit and province of the courts to inquire,” it said.

The High Court did not discuss the petitioners’ other points further.

Other legal questions related to the VFA were heard in two more cases at the Supreme Court, said lawyer Romel Bagares of the Center for International Law and who teaches international law at the Lyceum of the Philippines University-College of Law:

Has the VFA been invoked in controversial cases?

The VFA was put in the spotlight in at least two criminal cases involving US soldiers, and which both concerned custody issues over accused personnel.

According to Article V of the agreement, the custody of any US personnel whose case falls under Philippine jurisdiction “shall immediately reside with United States military authorities, if they so request,” from when the crime was committed until all court proceedings are complete. However, US military authorities shall make the defendant available to Philippine authorities “in time for any investigative or judicial proceedings relating to the offense.”

In “extraordinary cases,” the Philippines “shall present its position” regarding custody to the US government, which should take it “into full account.” In addition, US personnel should be confined or detained “in facilities agreed on by appropriate Philippine and United States authorities.”

If the VFA ends, what will happen to other military treaties and agreements with the US?

The Department of Justice said it will study the effects of the VFA’s termination on the MDT and EDCA.

Meanwhile, Bagares argued that executive agreements based on the VFA would have “no leg to stand on” if the VFA is scrapped. – with reports from Sofia Tomacruz/Rappler.com