Facebook Twitter Copy URL
Copied
What are the usual motives and outcomes? Rappler lists some of incidents.

MANILA, Philippines – Hostage-taking incidents remain one of the many risks faced by any person in any country, which sometimes turn for the worst if not handled properly.

On Monday, March 2, a former guard in a Greenhills mall held hostage at least 30 people, including vendors and mall employees, after he was allegedly fired after going on absence without leave for weeks. He demanded talking to fellow guards and media.

This is not the first incident in San Juan City, or even the Philippines.

Rappler lists some of the reported hostage-taking incidents in the country, the motives, and their eventual outcomes.

At least 16 inmates at the detention center of the Davao Metropolitan District Command Center took hostage members of Joyful Assemblies of God on August 13, 1989. The victims were in the area to preach but were overpowered by the inmates, according to reports.

The hostage takers were led by Felipe Pugoy, an inmate who was previously involved in a similar incident at the Davao Penal Colony in April 1989. In a report by the Associated Press, then justice undersecretary Silvestre Bello said authorities “were not dealing with reasonable people.”

The crisis lasted from August 13 to August 15 and led to the death of 21 people, including 5 victims and 16 hostage takers, after a shootout. The victims included a 9-year-old boy and an Australian missionary named Jacqueline Hamill who was reportedly raped during the hostage taking.

Hamill was the subject of a widely criticized joke by President Rodrigo Duterte during the campaign period in 2016. The incident happened during his time as Davao City mayor. (VIRAL: Video of Duterte joking about raped Australian woman)

According to a report by the New York Times, Aguinaldo was facing an arrest in relation to an alleged coup attempt in December 1989.

The hostage taking ended in a clash between supporters and government troops, which led to the death of at least 14, including brigadier general Oscar Florendo who was among the arresting officers. Florendo was then the head of the military’s civil relations office.

Aguinaldo fled but was eventually arrested and called the death of Florendo a “mistake.” He went on to win a seat at the House of Representatives before getting killed in an ambush in 2001.

The boy died on the spot after getting stabbed 13 times by his hostage-taker identified as Diomedes Talbo. According to reports, Talbo was then fired at by responding police and mauled by a crowd.

The incident was caught on video and broadcast in a lot of news shows.

The capital’s Internal Affairs Office recommended the “forced resignation” of the Pasay City police chief and dismissal of 6 of his men over what was criticized as a “botched” operation against the hostage taker.

A man identified as Al Bautista took hostage 4 people at the Hall of Justice of Taguig City on March 14, 2007. He reportedly had with him a handgun and grenades before triggering the incident that took over 24 hours.

According to a GMA News Online report, Bautista got angry over his girlfriend Delia dela Cruz’s land dispute with a certain Gina Ramos, one of the 4 victims.

Bautista was supposed to surrender himself after negotiations but then fired at police approaching him. He allegedly tried to jump from a window too.

All the hostages survived, while Bautista died reportedly due to gunshot wounds. A man identified as Jun Ducat and another man held hostage 32 children and at least 3 teachers inside a bus parked in front of the Manila City Hall on March 28, 2007.  According to a report by Reuters, Ducat was armed with a submachine gun, revolver, and grenades.

The children, all aged between 4 to 6 years old, were from the Musmos Day Care Center – owned by Ducat himself. Using a loudspeaker, Ducat aired his grievances against government corruption and the dire situation of poor families in the Philippines.

Ducat eventually released all the children and teachers.

He was detained for one year and 9 months and was freed on bail in December 2008. 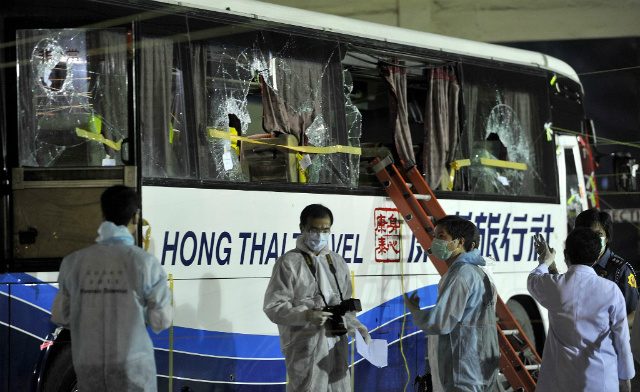 Rolando Mendoza, a dismissed policeman, took over a tour bus in Manila, taking hostage 23 tourists on August 23, 2010. Among his demands was reinstatement in the police force.

He was previously dismissed due to alleged extortion.

Mendoza killed at least 8 of his hostages, after allegedly being agitated by police during negotiations and after seeing that authorities arrested his brother Gregorio.

In 2011, survivors told a Hong Kong court that he turned “extremely angry” in a matter of hours when they were idle in the Quirino Grandstand.

Mendoza was eventually killed by police.

It was the first crisis that hit the Aquino administration, as then-president Benigno Aquino III refused to issue an official apology which Hong Kong demanded.

The incident also strained relations between the Philippines and Hong Kong, with the latter issuing a black travel warning to the country, asking residents to avoid non-essential travel.

In April 2018, President Rodrigo Duterte himself apologized to Hong Kong during an official event.

At least 10 armed men held hostage 14 people on April 2, 2011 in Agusan del Sur. The men demanded the release of Datu Ondo Perez who was in jail.

The victims, including school officials, teachers, and students, were taken while walking back from a school event. They were then led to a mountainous area away from the road.

Negotiations took more than 4 days. The victims were eventually released one by one.

In 2013, one of the suspects identified as Allan Perez was arrested over a robbery charge related to the incident.

A man identified as Anthony Zepeda held hostage his family on December 31, 2013 over a disagreement with his father in Pili, Camarines Sur.

According to a report by the Philippine Daily Inquirer, police tried to negotiate with Zepeda to no avail because he refused to talk to them.

The 10-hour crisis ended with Zepeda killing himself after killing his father Expedito, brother, sister-in-law, and a househelp.

A security guard named Charlemaene Aton held hostage lawyer Solomon Condonuevo in San Juan on June 23, 2014 after a heated argument as the two were preparing to leave the office building.

Police negotiated with Aton, who demanded to speak with then-president Aquino and even then-US president Barack Obama. He also requested plane tickets for his relatives from Zamboanga del Norte.

The 10-hour negotiation ended with Aton killing Condonuevo, after he reportedly became agitated over what he thought was a siren from additional police force. The siren was from a nearby firetruck that was stationed due to the annual Wattah-Wattah Festival, according to a PDI report. A man took hostage at least 13 people inside a passenger bus at the North Luzon Expressway (NLEX) on October 20, 2014.

Lauro Sanchez, a resident of Agoncillo in Batangas, was described as having “some psychological instability” by police.

Sanchez was eventually arrested only after a few hours by a police SWAT team that entered the bus. All hostages were released unharmed, with only two policemen injured after grappling with the suspect.

A man took over a bus along Taft Avenue in Manila, taking hostage his fellow passengers, on October 8, 2015.

According to reports, police tried to negotiate with him for an hour but eventually fired at the suspect after seeing him pressing a “pointed object” on one victim.

The suspect was declared dead on arrival at the hospital.

A domestic problem turned for the worse when a man took hostage at least 12 people inside one of the toilets in a popular mall in Dasmariñas in Cavite on October 9, 2016.

The suspect, identified as Carlos Lacdao, was reportedly looking for his wife who was a bathroom attendant in the mall.

Nine of the 12 initial hostages were able to escape during the incident. According to reports, Lacdao stabbed several victims, leaving one dead.

Lacdao was eventually killed by police 3 hours into the incident.

2018 hostage-taking incident outside Polytechnic University of the Philippines

A man distraught over his brother’s death held hostage a 5-year-old child outside the PUP campus in Manila on December 17, 2018.

According to reports, the man identified as Dominador Abrinno took the child and a gun from a nearby security guard in Sta Mesa. He allegedly fired and injured several people.

After two hours of negotiations, Abrinno surrendered and released the child.

A man held his own cousin hostage in Cebu City on February 7, 2019.

The suspect, identified as Benji dela Rosa, allegedly had no “apparent reason” for doing what he did. According to the victim, Steve dela Rosa, Benji pointed a gun toward him, threatening to shoot.

The suspect was shot dead in an exchange with police. – Rappler.com