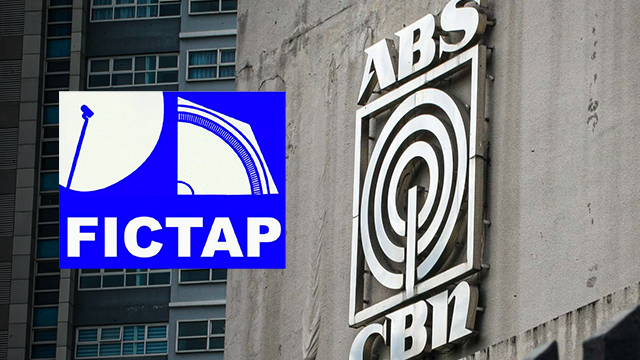 MANILA, Philippines – The Federation of International Cable TV Associates of the Philippines (FICTAP) lauded the National Telecommunications Commission’s (NTC) order for ABS-CBN Corporation to halt broadcasting operations on Tuesday, May 5.

FICTAP president Estrellita Juliano Tamano went on national television to explain why the association is against the franchise renewal of ABS-CBN, on the same day the media giant went off air. (READ: TIMELINE: Duterte against ABS-CBN’s franchise renewal)

Juliano-Tamano claimed that ABS-CBN had repeatedly violated its franchise rules and is “killing” the cable industry because of its other paid products, particularly the TVplus digital box.

She explained that the reason they opposed House Bill (HB) No. 4997, the first ABS-CBN franchise renewal bill filed in 2014, was because it was different from Republic Act (RA) No. 7966, the network’s old franchise approved in 1995.

She also said the bill sought to include the network’s multiple channels when it should only be one franchise per channel.

On Thursday, May 7, ABS-CBN released a statement disproving the claims made by Juliano-Tamano. Here’s a summary of major points pertaining to this issue.

Should ABS-CBN file a franchise for every channel?

There is nothing stated in the franchises, both in the law and the bill, that there should only be one channel per franchise. Philippine Cable and Telecommunications Association Inc (PCTA) president Ronaldo Manlapig explained in an interview with ANC on May 7 that one franchise can carry several channels.

(We don’t need to have a franchise per channel. The franchise of a broadcasting company like ABS-CBN already has its own frequency.)

ABS-CBN added that airing several channels is good for consumers as it provides them options.

(Having multiple channels that compete with each other is beneficial to the public because it urges media companies to improve their programs and give the viewers more choices),”

FICTAP has about 1,000 cable enterprise members, while PCTA currently has 392 regular and affiliated members. Though FICTAP has more members, PCTA serves 75% of total cable TV subscribers in the country.

Did ABS-CBN violate its existing franchise by launching TVplus?

ABS-CBN responded that technology allows them to broadcast multiple channels through TVplus and maintained that it is not a violation of the franchise.

Section 1 of RA No. 7966 says that ABS-CBN was granted to construct, operate, and maintain broadcasting stations through microwave, satellite, or “whatever means including the use of any new technologies” in television and radio systems.

Manlapig also explained that there is currently a transition from analog to digital broadcasting mandated by the government.

In 2017, the Department of Information and Communications Technology (DICT) released a framework of the “Digital Terrestrial Television Broadcasting (DTTB) Migration Plan,” which aims to complete a national switchover to digital by 2023.

Under the analog television system, broadcasters use the assigned bandwidth to transmit one analog program. “Comparatively, in digital technology, broadcast of multiple standard definition television programs and/or in high definition TV using the same bandwidth is possible,” the DICT wrote in its migration plan.

The country launched its “digital switch on” in 2015 and started its “analog switch off” in 2017. ABS-CBN launched TVplus in February 2015.

FICTAP tagged ABS-CBN’s pay-per-view programs as “illegal activities,” arguing that the airwaves used by ABS-CBN are free to air.

Juliano-Tamano specifically mentioned ABS-CBN’s movie channel Kapamilya Box Office (KBO) and the Pacquiao-Mayweather fight in May 2015, which ABS-CBN offered as a pay-per-view service for P2,500.

On the Pacquiao-Mayweather fight, ABS-CBN saidthe NTC only issued the cease and desist order against it after the fight was already sold by the company. The company had also earlier insisted that KBO, which is delivered through TVplus and which charges P30 to P99 for subscription and access to selected content, received necessary government and regulatory approvals. (READ: ABS-CBN slams Calida: We did not violate the law

During the Senate hearing on February 24, Justice Secretary Menardo Guevarra said that in their opinion, ABS-CBN’s pay-per-view services are not a violation of its franchise.

“We interpreted the phrase ‘commercial purposes’ broad enough to include any other sources of income apart from advertising. But subject to any specific guidelines that the NTC may impose,” Guevarra said.

Moreover, Manlapig argued that KBO can be considered part of the government’s DTTB plan, where broadcasting companies adopt new technology so they could also deliver programs through the airwaves.

But determining whether or not KBO is illegal is still up to the NTC. As of May 7, Manlapig said they are still waiting for the NTC to release guidelines to clarify the issue.

If ABS-CBN is found to have violated any rule, the NTC said it may be subject to a penalty worth P200 per violation.

Juliano-Tamano said HB No. 4997 was not approved by Congress in 2014 because FICTAP opposed it. She further blamed ABS-CBN for doing nothing from 2015 to 2019.

However, it is the Congress, not the private company, which has the power to call for hearings.

There had been at least 12 bills for the franchise renewal of ABS-CBN from 2014 to 2019. All were left pending at the committee level.

ABS-CBN also denied that HB No. 4997 was rejected because of FICTAP. The company said the reason it was not passed was because Congress sat on it.

HB No. 4997 was dated September 11, 2014. According to its legislative history, it has remained pending with the Legislative Franchises committee since September 15, 2014. – Rappler.com