IN CHARTS: COVID-19 cases in the Philippines Facebook Twitter Copy URL
Copied
(54th UPDATE) Around 2.2% of the country's caseload are active cases as of February 13. Our two-week average positivity rate as of February 11 is at around 21% – within the WHO's range that indicates a 'very high risk of infection' in an area.

MANILA, Philippines – Over two years since the first confirmed case on January 30, 2020, the total number of cases in the Philippines already breached 3.6 million on February 13, 2022.

The chart below shows the number of confirmed cases reported by the Department of Health (DOH) per day. See also the country’s seven-day running average for daily new cases.

In mid-January 2021, after the holiday season and the emergence of a new COVID-19 variant, the average neared the 2,000 mark again. In the weeks that followed, it held steady above 1,500. But in late February, the uptick in new cases continued as the average crossed 2,000 once more.

The seven-day average briefly slowed around mid-July, then went up again due to the presence of the more infectious Delta variant. After a fresh peak around mid-September and a brief dip in late November, the average quickly climbed again in December, after cases of the Omicron variant were confirmed in the country.

The current highest one-day tally of new cases stands at 39,004, reported on January 15, 2022. Afterwards, the Omicron-driven surge started slowing down.

See below how the total number for confirmed cases, active cases, deaths, and recoveries have progressed each day in the country, based on the DOH’s data.

Most of these active cases have mild conditions, according to the DOH.

The color codes for the two-week growth rate and two-week ADAR are based on DOH’s risk classifications.

You may search for a province or city or sort the columns in the table below.


Then here is a look at the COVID-19 situation per region.

MAPS: COVID-19 in the Philippines 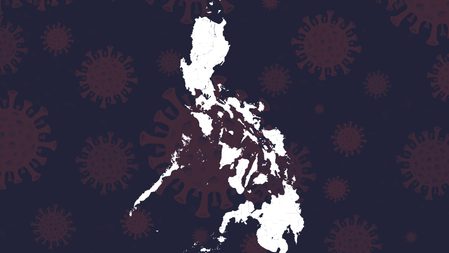 Cases by date of onset

In its separate daily situation reports, the DOH uses the date of onset of illness (or in its absence, the date of specimen collection) to show the earliest occurrence of the virus in each case.

Looking at this chart, the number of new cases started to go up around June 2020, then reached its peak on August 10. By October, it went down to below 2,000.

An uptick that started in February 2021 peaked at over 12,000 in early April. The upward trend happened again in late July, reaching as high as 23,000 by mid-September.

The seven-day average of new cases by date of onset was just at around 1,000 as of the last week of December, then reached a new peak of over 31,000 by January 2022 before going down again.

Community quarantines in many areas around the country had been relaxed around June 2020, but some had returned or remained under strict lockdowns.

As in the tally for total cases, there are delays and data issues in reporting out the deaths and adding them to the national tally.

For instance, out of the single-day record of 423 deaths reported on October 30, 2021, the DOH said 373 "were previously tagged as recoveries [but] were reclassified as deaths after final validation."

Looking at the deaths by date of death, the number first peaked around late March 2020, then again in August, with 87 deaths on August 11. It went down then held steady until around March 2021, when it rose again. The month of August and the first half of September in 2021, as well as the last half of January 2022 also saw an uptick in deaths.

Below, compare the charts for deaths by date reported and by date of actual death.

The most recoveries reported in a single day was 72,607, on April 18. The DOH explained that this sudden spike in recoveries was due to their implementation of a "mass recovery" program, where mild and asymptomatic cases are tagged as recoveries based on discharging criteria by the World Health Organization and endorsed by Philippine medical societies.

This program had been implemented weekly from mid-August 2020 until mid-April 2021, when the DOH started running it daily.

See below the chart for recoveries by date reported.

Meanwhile, in the DOH dataset as of February 5, only 555,335 of 3,410,821 recoveries (or 16%) indicate a date of actual recovery and are tagged as "Recovered." The DOH attributed the missing dates of actual recovery to "the incomplete and inaccurate contact information placed in the Case Investigation Forms." (READ: How complete is DOH's coronavirus dataset?) So far, those in the 25-29 age bracket are the most affected by COVID-19, followed by those aged 30-34. Meanwhile, deaths due to the disease are mostly in the older age brackets.

The rate for active cases returned above 10% in mid-March, then settled below 10% again by late April.

Here is a snapshot of the occupancy rates of COVID-19-dedicated beds, as well as the usage rates of mechanical ventilators in hospitals and health centers per region.

On September 14, 2021, the two-week moving average of the country's positivity rate – a snapshot of recent test results – skyrocketed to 27.79%.

This record was broken in January 2022, when a new wave of infections brought the two-week rate to new highs. It peaked at 45.76% on January 20.

This means the country is above the 20% range that is among the criteria for an area to fall under the "Community transmission – level 4" category, according to the World Health Organization's latest guidance issued in June 2021.

Maintaining a positivity rate of 5% or below for at least two weeks indicates that an area "has sufficient testing capacity for the size of their outbreak and is testing enough of its population to make informed decisions about reopening," explained the John Hopkins University.

The Philippines has tested nearly 25.8 million individuals as of February 4.

After logging a high of over 44,000 individuals tested on September 11, the number of daily tests slowed down from October 2020 to January 2021. It slumped further during the Christmas and New Year holiday break.

The pace improved in March and April 2021, reaching the high levels recorded in September 2020 then picked up again only in August 2021. On September 8, a total of 85,772 individuals were tested, the highest number set in 2021.

The number of individuals tested per day decreased in the following months, and increased only around January 2022, with a new one-day high of 85,930 logged on January 14.

(In the chart below, data for recent days may still be incomplete due to delays in the submission of test results by some testing laboratories.)