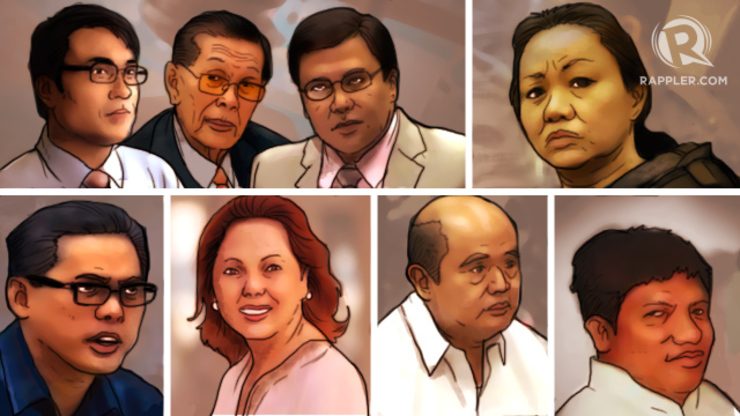 Facebook Twitter Copy URL
Copied
Fifty individuals are co-defendants of senators Revilla, Estrada, and Enrile and Janet Lim Napoles in the plunder and graft cases filed before the Sandiganbayan

MANILA, Philippines – The spotlight right now is on the 3 senators charged with plunder and graft and the alleged mastermind of the pork barrel scam in which they have been tagged.

Fifty other government officials and private individuals are also charged before the Sandiganbayan along with senators Ramon Revilla Jr, Jinggoy Estrada, Juan Ponce Enrile, and the woman who gave them kickbacks after siphoning off their discretionary funds, Janet Lim Napoles.

Revilla, Estrada, and Enrile are facing plunder and graft charges; Napoles is a co-defendant in all their cases. (READ: What’s the difference: Plunder, graft in PDAF issue?)

The 50 other individuals who are named conduits in the biggest corruption scandal in recent Philippine history are the following: Below is a list of those co-accused in the pork barrel scam, and in which cases they are co-defendants:

At the the Sandiganbayan, the Philippine anti-graft court, Revilla’s cases have been assigned to the 1st division; Enrile’s, to the 3rd division; Estrada’s, to the 5th division. (READ: Sandiganbayan assigns plunder, graft cases) – Rappler.com