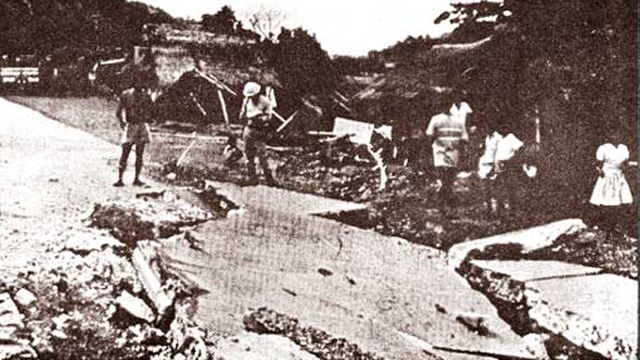 MANILA, Philippines – The Philippines is one of the most disaster-prone countries in the world. Located along the Pacific Ocean’s “Ring of Fire” and having 5 major fault lines, it is vulnerable to disasters such as earthquakes.

The country is no stranger to earthquakes, but one of the most memorable to hit it is the quake that hit the island of Luzon in 1990. That powerful quake resulted in a number of collapsed buildings and thousands of lives lost.

At around 4 pm on July 16, 1990, a magnitude-7.8 earthquake hit Northern and Central Luzon. Its epicenter was recorded in Nueva Ecija, and the shaking lasted for about a minute.

Among the hardest hit areas were the cities of Baguio, Cabanatuan in Nueva Ecija, and Dagupan in Pangasinan.

Because of shocks and fear of possible aftershocks, thousands of residents slept on the streets. (READ: Sonia Roco: Eyewitness to the 1990 Luzon earthquake)

The quake left an estimated US$369-million worth of damages, and a total of 2,412 people dead.

The 1990 earthquake left not just massive damage and casualties, but also lessons about disaster readiness.

According to Solidum, not much attention was given to disasters, especially earthquakes, at the time. In fact, earthquake drills were unheard of then.

2. Hazards and their effects should be simulated

After the earthquake, transportation and communication lines were all affected, leaving Baguio isolated from the outside. The government did not have any idea about what the situation in Baguio was like then.

Taking off from that, Solidum said it is important for people to be aware of the hazards in their areas so that if a disaster happens, they are not left clueless about developments – should communication lines be cut or roads blocked.

3. Building codes should be implemented properly, and land use should be carefully planned.

Despite having sevral collapsed and destroyed buildings, a good number of them were left standing then. Solidum said the country’s building code is actually good, but the problem lies in implementation. Good design, quality materials, and good workmanship are needed for a disaster-resilient building.

When it comes to land use planning, he said that buildings should not be constructed in areas prone to landslides. “Shaking does not kill people. Collapsing buildings will,” Solidum said.

4. Trained search and rescue groups and medical responders are needed.

Immediate response after an earthquake could be a problem, especially if there is a lack of rescue groups and responders.

According to Solidum, the golden rule is: “People must be rescued within the first 3 days.”

But are we ready?

In 2004, a study funded by the Japan International Cooperation Agency, the Metro Manila Earthquake Impact Reduction Study (MMEIRS) found that a 7.2 magnitude earthquake could hit Metro Manila and could destroy 40% of the establishments in the metropolis and kill around 34,000.

Have we learned from the lessons left by the 1990 earthquake? Are we ready for the next “big one”? – Rappler.com